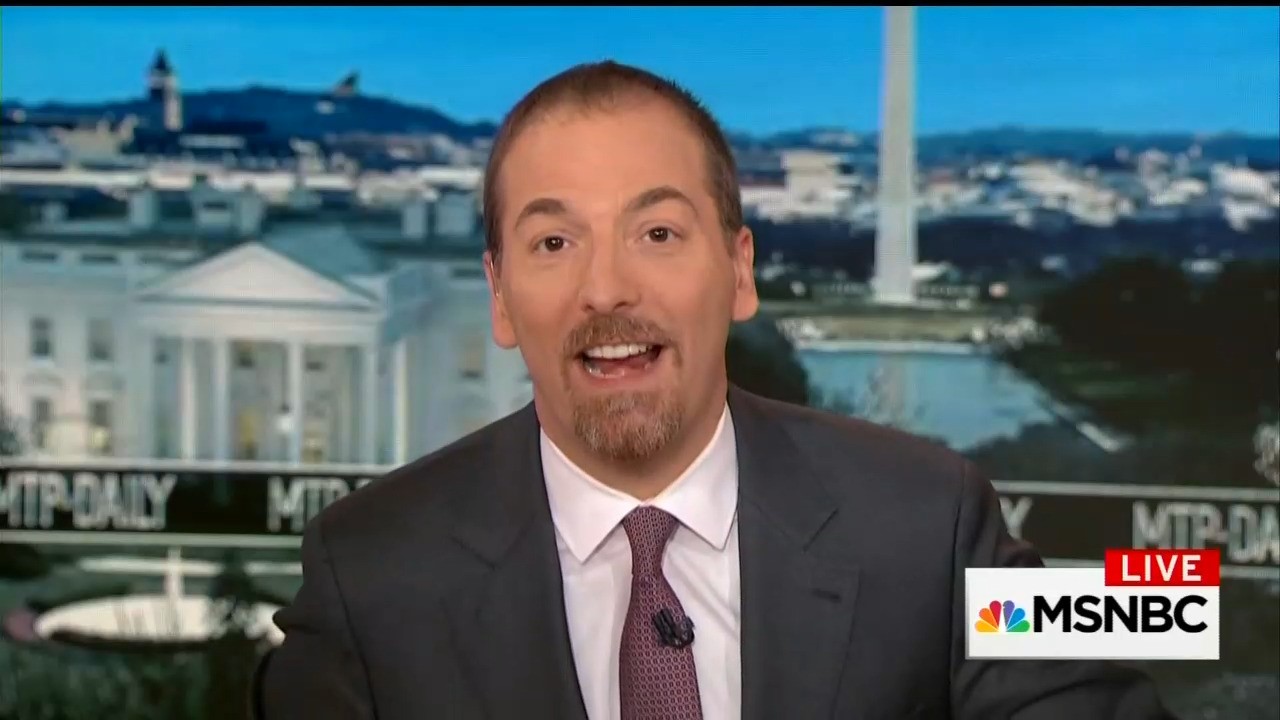 NBC/MSNBC host Chuck Todd granted an interview to Jamie Weinstein of National Review, where he continued his attack on anyone who would question the "mainstream" media's tilt. Weinstein politely avoided all the topics that would make Todd want to punt the interview: no questions about Matt Lauer, no questions about Todd granting two platforms for Antifa to defend violence, and no questions about hosting cozy dinner parties honoring Hillary staffers with Mrs. Todd (and you can NOT mention any conflict with the wife's Democrat direct-mail business!)

About 29 minutes in, Weinstein asked how to distinguish Fox News from MSNBC, “because an argument can be made that Fox News is giving their viewer what they want, which is, Clinton email update investigations, or non-Mueller news, and CNN and MSNBC and others are giving their four hours of ‘we just found another email in the Mueller investigation, we’re not sure how this plays in the grand scheme of things,’ but we can bring on six lawyers and discuss it.”

Todd brought out the swagger: "Well, the first way MSNBC would say they’re different from Fox is that they operate always in a fact-based environment, and that they don’t delve into conspiracy theories (mutters) the way a few people in prime time do."

Todd really hates anyone on television criticizing "professional journalists," which seeks to establish political manners as  "we can attack you, but you can't attack us."

CHUCK TODD: I would say this. My biggest beef with how Fox conducts itself is that they weaponize – is that they go after journalists. I just think it’s low-class --

WEINSTEIN: What do you mean?

TODD: They go after us! Rather than if your ideas are winning, go after the people proposing the ideas. The press-bashing feels like a cheap business ploy. They’re just looking for viewers.

TODD: Attacking the press! Rather than --

TODD: I’m not going to get into what CNN does for a living, um, over there!....I just think that how Fox has personalized the attacks on professional journalists -- it's fine, it’s a free country, they’re welcome to do it -- it’s sort of taking drive-time talk radio tactics and doing it on cable television, which I just think is cheapening. That’s all. It’s unnecessary! Go win the ideas.

There are people conducting the functions of the government, and there are people that cover it. You know,  I just have a pencil, or an iPhone, you know....so I’m not a big fan of that, of how they’ve gone about that. It’s a good ratings stunt, and they do it for clickbait, and whatever it is that they do, and it’s worked.

In other words, Chuck thinks criticizing the media is always and automatically a cynical ploy, never an idealistic search for fairness and accuracy. Weinstein is implying a role reversal: Is CNN's incessant Fox-bashing a business ploy? What about CNN's and MSNBC's incessant Trump-bashing?

Todd agreed, saying his favorite anecdote was a man at the Iowa State Fair that he knows Trump is "full of it," but "he's my middle finger to all you guys." So why can't Todd and his colleagues explore how they might fix that image?