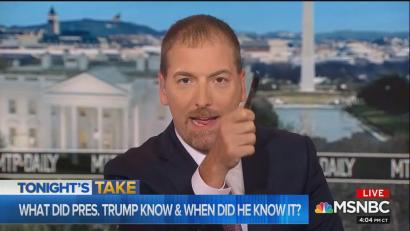 CNN media analyst Brian Stelter returned from vacation practically glowing in his overnight newsletter over a new anti-conservative jeremiad by NBC's Chuck Todd in The Atlantic, a magazine that endorsed Hillary Clinton for president in 2016.

The bizarre thesis is that somehow, the liberal media hasn't "engaged" Trump and conservatives on the charge that they're a liberal mob. Haven't they all raged against being called an "enemy of the people"? Haven't they compared Trump to every mass-murdering dictator they can imagine? And yet, Stelter announced:

In an unusual and pointed piece for The Atlantic -- which you all should read -- Meet the Press moderator Chuck Todd is urging all of us to recognize what anti-media manipulators are doing – and respond accordingly. He's saying the days of "don't engage" are over. And I believe he's right.

Now, with President Trump fueling this growing fire, Todd says "the idea that our work will speak for itself is hopelessly naive."

This dangerous "anti-media" hostility is somehow racist: "The closest parallel in recent American history is the hostility to reporters in the segregated South in the 1950s and ’60s." Todd proclaimed (in a passage circulated on Twitter by Jeffrey Goldberg, editor of The Atlantic):

Some of the wealthiest members of the media are not reporters from mainstream outlets. Figures such as Rush Limbaugh, Matt Drudge, and the trio of Sean Hannity, Tucker Carlson, and Laura Ingraham have attained wealth and power by exploiting the fears of older white people. They are thriving financially by exploiting the very same free-press umbrella they seem determined to undermine.

Todd accused the late Fox News boss Roger Ailes of creating "the mythology of a biased press." What? Then he admits that there is such a thing as media bias...but mostly at Fox!

These are real issues, and most journalists labor to correct them. At the other extreme, critics may be accusing journalists of having deliberately and consciously shaped their reporting to serve some political end. That sort of overt bias is far rarer. Ironically, the best example of this kind of bias airs regularly in prime time on Fox News.

Who on Earth with a television, a newspaper subscription, or a cellphone doesn't recognize that our "mainstream" media are overtly biased, deliberately and consciously shaping their reports against President Trump and the Republican Congress?

We'll have more to say in the coming hours and days, but let's repeat one thought: it's not undemocratic or against the First Amendment to criticize "the press," as if only the liberal clique of Democrat enablers in our media establishment define "the press." The conservative media are also "the press," and to suggest we cannot criticize Chuck Todd or NBC or CNN is the undemocratic argument.