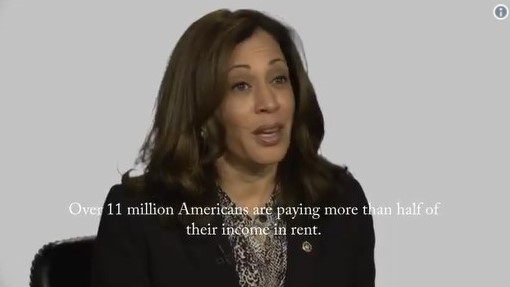 PolitiFact's kid-gloves treatment of prominent Democrats is on display again. Twitchy noted ultraliberal Sen. Kamala Harris drew a rare evaluation, but of course, the ruling was "Mostly True." Harris has a new bill offering a refundable tax credit for renters making under $100,000 a year and who spend more than 30 percent of their income on rent. She tweeted: "In 99 percent of counties in America, someone making the minimum wage working full time can’t afford a 1-bedroom apartment."

What? First of all, it's odd to file a bill for people making less than six figures and then sell it as helping "someone making the minimum wage working full time," which is a tiny fraction of Americans. PolitiFact's Lucia Geng went to Harris spokesman Tyrone Gayle for an explanation, and then concluded with their usual favorable elasticity for liberals:

She was referring to a recent study by the National Low Income Housing Coalition, which shows that "in only 22 counties out of more than 3,000 counties nationwide can a full-time minimum wage worker afford a one-bedroom rental home at fair market rent."

With that said, Harris’s claim is still a largely accurate characterization of the magnitude of the rent affordability problems that many people face.

"Close enough," joked Noah Rothman on Twitter. As long as your liberal heart is bleeding for "the magnitude of rent affordability problems," you get a pass. True, with "a few minor caveats."

There's at least two problems here. First, when conservatives make claims and then refer to a conservative think tank for their research (say, the Heritage Foundation), reporters think these studies are too ideological to be reliable. They would seek out something less conservative. But they don't apply that skepticism to liberal lobbies like the National Low Income Housing Coalition, which might have an interest in supporting the Harris legislation. They would have a tendency to try to pick apart the original source, not accept it as objective and nonpartisan.

The second problem is the obvious math-mangling here: "can't afford an apartment" is NOT the same factual claim as "can't afford the average-priced apartment." Obviously, low-wage workers would logically face the need to find a lower-than-average priced one-bedroom apartment. Or a studio.

Overall, PolitiFact has undertaken only nine evaluations of Kamala Harris -- five Mostly True, two True, and two Half True (and one of those two was Democrat-on-Democrat warfare).

For a demonstration of how PolitiFact twists the words of Republicans to find a "False," see this example from the website PolitiFact Bias.