Those "independent fact checkers" at Snopes threw a red flag at conservative websites like the Daily Wire for a "mixture" of truth and falsehood on the question "Is San Francisco Registering ‘Illegal Aliens’ to Vote?" You have to get a kick out of the objection to the I-word and the A-word. They prefer "non-citizens." We wouldn't call their site "non-partisan."  This is their breakdown, and as you can see, they object to what it sounds like, not how accurate it is:

WHAT'S TRUE: Some non-citizen San Francisco residents can register to vote in local school board elections.

WHAT'S FALSE: San Francisco is not allowing the non-citizen population at large to register to vote in all elections.

But did conservatives fail to nail the specifics under the headline? Bethania Palma complained: 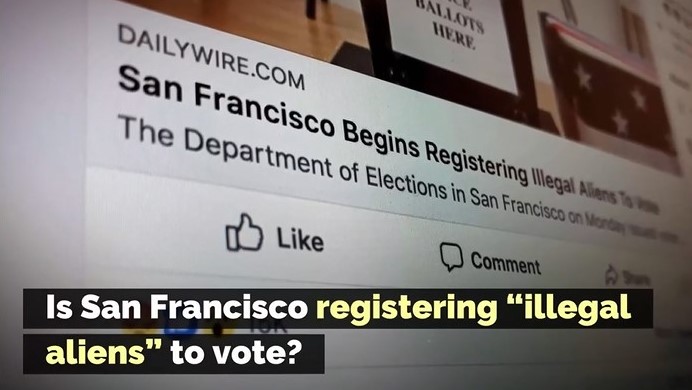 When the San Francisco Board of Elections began issuing voter registration forms for non-citizen voters on 16 July 2018, some web sites catered to the anti-immigration sentiments [they link to the Huff-Post] of their audiences by publishing articles on the topic under headlines such as “San Francisco Begins Registering Illegal Aliens to Vote,” implying to readers that the city was planning to throw their polling place doors wide open to allow everyone, regardless of immigration status, to vote in every election. [Italics mine.]

Palma linked to Joseph Curl of the Daily Wire, whose headline was "San Francisco Begins Registering Illegal Aliens To Vote."  The headline is accurate: the city is beginning to register illegal aliens to vote. Then Curl noted the same specifics as Palma:

The Department of Elections in San Francisco on Monday issued voter registration for illegal aliens to allow them to vote for members of the city's Board of Education in the Nov. 6 election.

Becoming California's first city to allow non-American citizens to vote in local elections, Supervisor Norman Yee said, "We want to give immigrants the right to vote."

[For the record, "immigrants" are people who come to America through the legal process, while "illegal aliens" sneak into the country.]

In order to vote, the illegal aliens must live in the city, be at least 18 years old and be the "parents, legal guardians or caregivers of children under the age of 19 who also reside in San Francisco,

Palma added "The term 'non-citizen' is a broad one that encompasses everyone from lawful permanent U.S. residents (i.e., 'green card' holders) who have lived in the United States for many years, to undocumented immigrants lacking a legal basis for prolonged residency in the U.S."

San Francisco has become the first city in California to begin registering non citizens to vote. Now do you see why Democrats want illegal aliens to enter this country so bad? They want votes, and if you vote Democrat, you support this corruption. #WalkAway

We have rated this "fact-check" by Snopes as Deeply Distorted. For similar analyses, please visit our Fact-Checking the Fact-Checkers site.