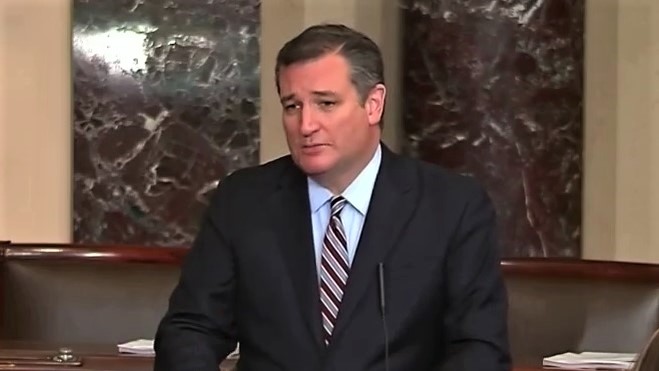 The "independent fact checkers" have a funny way of finding "technically correct" claims by conservatives to be "Mostly False." W. Gardner Selby at PolitiFact hammered that rating on Sen. Ted Cruz as he calmly described to Dallas NPR station KERA the media's ardor about separating illegal immigrants from their children:

CRUZ: This is an issue that, I think, the media has largely constructed because what’s shifted is that the (President Donald) Trump administration is endeavoring if people cross illegally to arrest them, not to let them go -- and so if they have kids, you know, there is actually a court order that prevents keeping the kids with the parents when you put the parents in jail.

PolitiFact conveniently snipped out liberal-mocking sentences immediately before and after this. Before it was: "There’s a reason why under the Obama administration that often didn’t happen. Because when they apprehended people here illegally, they just let them go. And when you let them go, you didn’t separate children from parents."

After it was: "So when you see reporters, when you see Democrats saying, ‘Don’t separate kids from their parent,’ what they’re really saying is, ‘Don’t arrest illegal aliens’.”

Conservative blogger and lawyer Gabriel Malor offered the usual take on PolitiFact from the right: 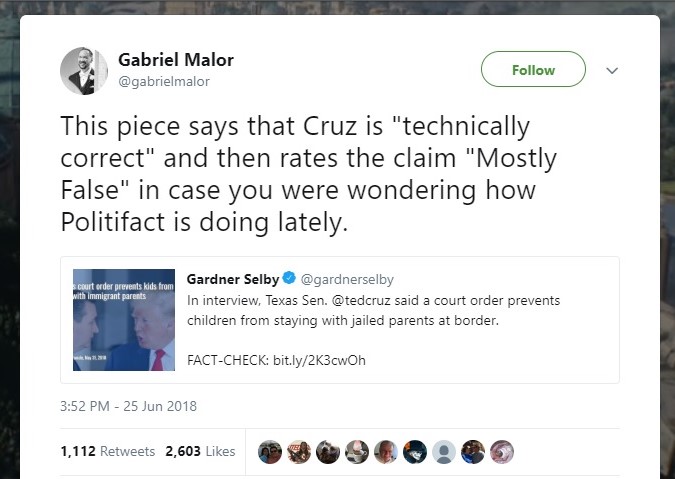 Selby, guided by liberal lawyers, insisted Cruz bungled it because “We didn’t spot language in the January 1997 agreement in Flores v. Reno that explicitly bars children from staying with parents who have been detained or jailed.” But even under Obama, actual government policy has separated children from parents, or released both.

Rick Su of the University of Buffalo School of Law said by email that the Flores agreement can be read as barring children from jail, but Su said it doesn’t condone or require the separation of children from parents....

Su called Cruz’s claim technically correct but misleading in that it leaves the inaccurate impression that the government, by policy and law, has no choice but to separate children from parents.

PolitiFact asked Cruz aide Maria Jeffrey to point out where separating children from parents is required.

By email, Jeffrey noted the mandate that minors be placed in the "least restrictive" setting and the section about minors being released to family members if possible.

Jeffrey further pointed out that the California-based 9th U.S. Circuit Court of Appeals in 2016 held that the Flores agreement applies to all minors, not just those traveling unaccompanied. In that dispute, over the Obama administration placing children with their parents in family detention centers, the appeals court upheld a lower court’s refusal to amend the Flores agreement to accommodate family detention--after which, Su told us, the Obama administration chose to simply release such parents and children.

Jeffrey wrote that Cruz’s "point is simple and 100% correct: When the parents are detained, the Flores agreement compels placing the child with another family member or in another less restrictive setting."

But PolitiFact stuck with its "False Cruz" conclusion:

There’s an element of truth to Cruz’s interpretation of the 1997 Flores agreement requiring children to be released or placed in least restrictive settings. As he said, children can’t be jailed with their parents. But that’s true in any situation in which a parent is sent to jail.

It's not at all surprising that PolitiFact would rush to their "Truth-O-Meter" when a conservative suggests the media are overwrought in describing/decrying Trump policies. Then the "element of truth" gets buried under liberal rebuttals that are painted as "Facts."