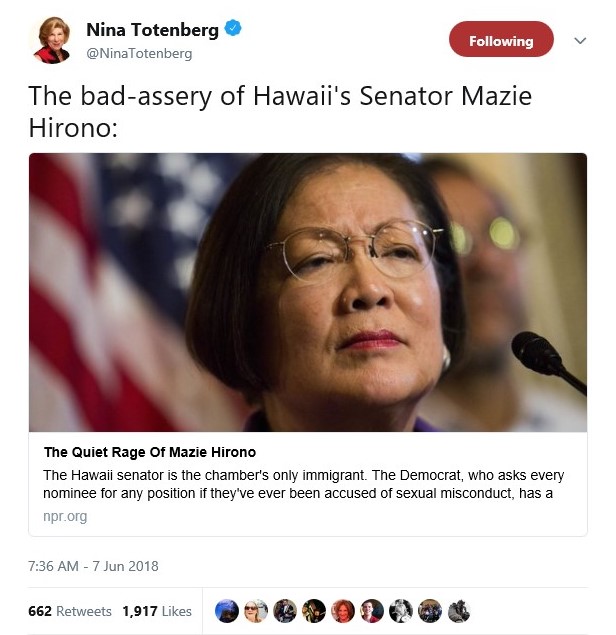 National Public Radio touts itself as an oasis of civility. But the calm tones of its announcers belie a dramatic liberal tilt. On Thursday's Morning Edition, longtime Supreme Court reporter Nina Totenberg touted the "quiet rage" and even "bad-assery" of Sen. Mazie Hirono, Democrat of Hawaii (lifetime American Conservative Union rating: 0.73 percent). She said to people who call her liberal, "F--- them."

"She's the Senate's only immigrant, and its first Asian-American female senator," announced NPR host Steve Inskeep. With our tax dollars, NPR helps the #Resistance feel some hope in the dark days of Trump in the White House. Totenberg was all fluff, no troubling conservatives or Republicans, in promoting how Hirono has emerged:

NINA TOTENBERG: Even in Hawaii, Mazie Hirono is viewed as the, quote, "good girl" of politics -- polite, never in your face, not a boat rocker. But in the last year and a half, as one Hawaii columnist put it, she's become, quote, "a bad ass."

MAZIE HIRONO: I always was. I just wasn't very noisy about it. I've been a fighter all my life. I just don't look like that.

TOTENBERG: Hirono recalls a breakfast in 1994 when Ben Cayetano, who was running for governor, was trying to talk her out of running for lieutenant governor because he said she wouldn't help the Democratic ticket.

HIRONO: And I said, well, that's all fine and good, but it's all [expletive] and I'm running. And by the time the primary election comes, people will know who I am. 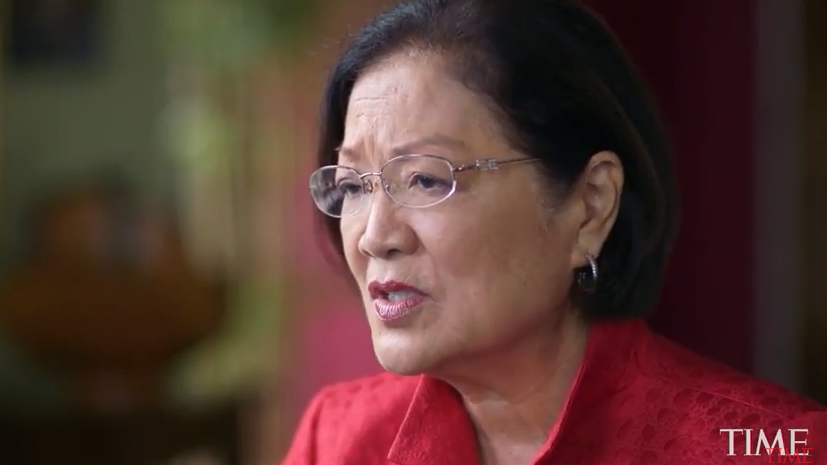 Totenberg gushed, "Mazie Hirono plays the political game with a quiet rage, bred of personal experience. Born on a rice farm in Japan, she lived with her mother and three siblings in harsh conditions." She was inspired to activism by the Vietnam War and Betty Friedan's feminist classic The Feminine Mystique.

Totenberg touted her as a bridge-builder who appealed to the heart of then-Senator Jeff Sessions on a charitable tax provision for people who wanted to help typhoon survivors in the Philippines, and then, like a good liberal, she voted against the Sessions nomination for attorney general.

TOTENBERG: Hirono's voice is rarely that openly passionate. Indeed, she can often have a rather flat affect, an unassuming, even cool, public presence that is in sharp contrast to her earthiness and colorful language in private. After a long, hard day, I asked her why her skepticism about Trump judicial nominees is any different from Republican skepticism about Obama nominees. She said that what she cares about is that judges are fair, qualified and care about individual and civil rights.

HIRONO: If that's considered liberal as opposed to what I call justice and fairness, as I'm wont to say, [expletive] them.