New Yorker Puffs the Parkland Protesters: 'Polite' as You Can Imagine? Like Saints?

On Monday, it appeared The New Yorker was having a contest for most ludicrous statement about the left-wing Parkland school protesters. First, Emily Witt claimed these slash-and-burn NRA haters "have been as polite and popular protesters can hope to be." Eek, who knew hope was dead?

The media could not love them enough: there were interviews on “60 Minutes,” NPR’s “Morning Edition,” and the late-night news shows. There were major interactive packages in Teen Vogue, and a Time magazine cover. There was, in short, so much consensus about the message of the student movement that it has to be one of the least anti-establishment social movements in American history. What the student leaders seem to be saying is that they don’t want trouble, and, had a person not arrived at their school with a gun, they would have kept their heads down and scored high on their S.A.T.s. They have been as polite and as popular as protesters can hope to be, and yet the establishment has continued to prove reluctant to change. 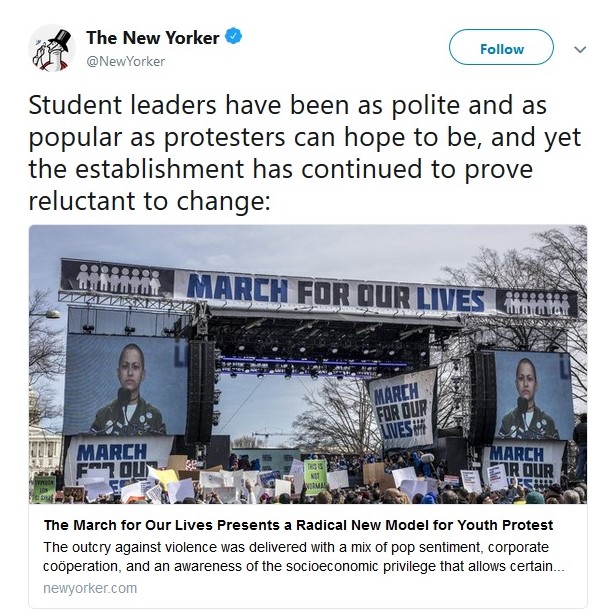 The Hold My Beer moment came from Rebecca Mead, who compared Cuban-flag-wearing bisexual Emma "We Call BS" Gonzalez to a cinematic (and the real) Joan of Arc. 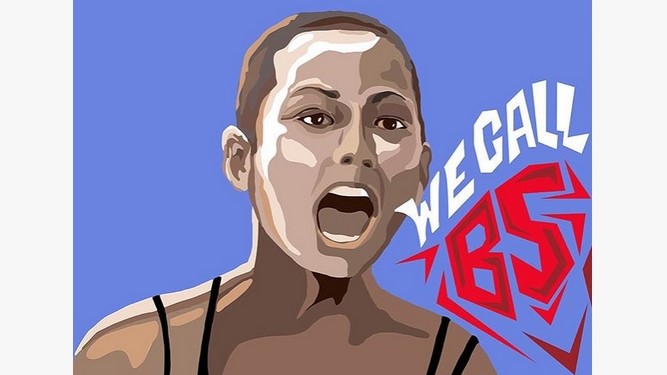 Her appearance also offered an uncanny echo of one of the most indelible performances in the history of cinema: that of Renée Maria Falconetti, who starred in Carl Theodor Dreyer’s classic silent film from 1928, The Passion of Joan of Arc. Based upon the transcript of Joan of Arc’s trial, in 1431, Dreyer’s film shows Joan as an otherworldly young woman—she is nineteen, to the best of her limited knowledge—who, in the face of a barrage of questioning by hostile, older, powerful clerics, is simultaneously self-contained and brimming over with emotion....

The consonance is, presumably, accidental: González has said she cut her hair short because longer hair gave her headaches and made her neck hot, not because she was aiming to embody a cinematic interpretation of one of the heroines of history. But the parallel is striking, because González, with her fervor and her charisma, has already been claimed as this moment’s Maid of Orléans.

In the iconography of The Passion of Joan of Arc, Joan has authority not because she is wise but because she is innocent. She has the privileged knowledge of the inspired, not the earned knowledge of the experienced. The young people of Marjory Stoneman Douglas High School have already experienced more than their elders would wish upon them; their innocence is lost. Yet, like all young people, they’ve retained faith in their generation’s unique ability to challenge and rectify the failures of their elders....our urgent need for the illumination that they seem to offer—for the blunt, righteous conviction they uphold—is another indication, were it needed, that a new kind of medievalism is upon us. Our potential saviors gleam all the more brightly against the pervasive political and civic darkness of the moment.

Can there be any stronger proof that liberals worship politics as their God?

We have to agree with Brandon Morse: 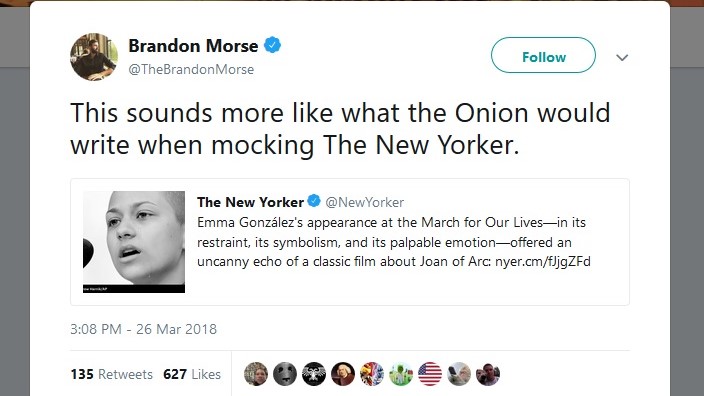