The Washington Post broke into reporting on Louis Farrakhan and the Democrats on Sunday with a “Fact Checker” column by Glenn Kessler. On page A-4, Kessler gave Rep. Keith Ellison – deputy chairman of the Democratic National Committee – a “four Pinocchios” rating for insisting he had no involvement with Farrakhan since 2006. Here are some of Ellison's denials: 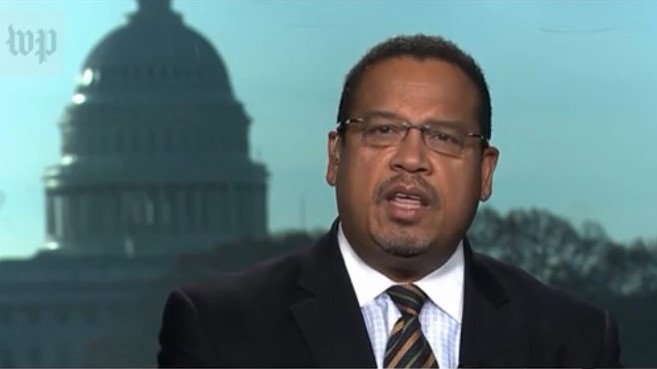 “Ellison’s spokesperson…said he ‘had no additional involvement with March organizer Louis Farrakhan or his organizations, has long since denounced him, and rejects all forms of anti-Semitism.’” — CNN news report, December 1, 2016.

“These men organize by sowing hatred and division, including anti-Semitism, homophobia and a chauvinistic model of manhood. I disavowed them long ago, condemned their views and apologized.” – Ellison op-ed in the Washington Post, December 2, 2016.

“Man, I’m telling you back in 2006 and before, I disavowed them. That’s the ridiculous thing about this, that we keep on having to answer this kind of stuff.” — Ellison on Morning Joe, December 14, 2016.

Carson and Ellison are the two Muslim-Americans in Congress. Ellison's staff "initially indicated they would offer a response, but failed to do so." The Post noted that CNN anchor Wolf Blitzer asked a Farrakhan question (at the end of an interview on February 22):

BLITZER: Congressman, as you know in recent days, you've come under some new sharp criticism for contacts you've had with Louis Farrakhan, the leader of the Nation of Islam, who frequently makes anti-Semitic comments.

ELLISON: No relationship. My political opponents keep pushing this out there in order to try to smear and distract from the key issues, but there's no relationship, Wolf. I mean, look, my -- I have a clear record. I have always fought for equal rights for all people. I will continue to do so. I've always denounced and been a fierce opponent of anti-Semitism from whatever source. I'll continue to do so.

"Carson at least acknowledged he met with Farrakhan to discuss issues related to community concerns," Kessler concluded. "Ellison is trying to have it both ways, publicly distancing himself while privately doing something else. He earns Four Pinocchios for suggesting his interactions with Farrakhan ended in 2006."

This is a straightforward fact-check evaluating a Democratic leader. More of these would show balance and build credibility in the Post “Fact Checker” unit.

For similar analyses, please visit our Fact-Checking the Fact-Checkers site.