Former New York Times executive editor Jill Abramson is really letting her Democratic pom poms fly. Her latest column for the Guardian newspaper is headlined "Are we seeing signs of a Democratic wave in the primaries? It’s thrilling to see signs of a Trump rebellion – it could lead to winning control of the House, and maybe the 2020 election." 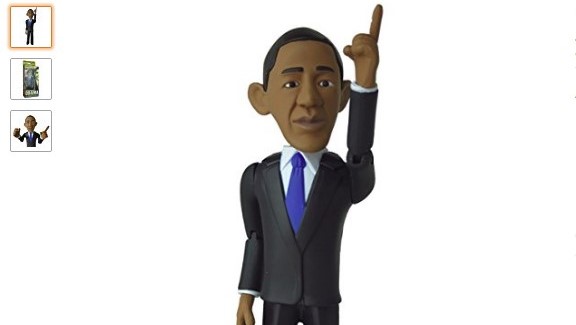 It's this passage that's getting all the attention:

It’s easy to look at what’s happening in Washington DC and despair. That’s why I carry a little plastic Obama doll in my purse. I pull him out every now and then to remind myself that the United States had a progressive, African American president until very recently. Some people find this strange, but you have to take comfort where you can find it in Donald Trump’s America.

This is how much Trump freaks out the media elites. "I carry a little plastic Obama doll in my purse"?

You can tell there's desperation in there because even the teacher's strike in West Virginia is somehow an omen of a Democratic wave election. Abramson touts the chances of beating Ted Cruz, despite the obvious results in last Tuesday's primary, where Cruz drew twice the votes of his opponent Rep. Beto O'Rourke, a man she just digs:

He is dead set against Trump’s border wall. A critic of the war on drugs, he’s for legalizing pot and banning assault weapons. A graduate of Columbia University in New York, he performed for a time in a punk band. But Texas likes quirky politicians and O’Rourke defeated an entrenched incumbent in a primary in 2012, the same year Texas sent Cruz, now 47, to the Senate.

Beto is the polar opposite of Cruz, one of the most conservative – and most disliked – politicians in Washington DC and famously launched a filibuster and an unpopular government shutdown upon his arrival in the Senate....

Of course, there are months to go until November and Beto has to be considered an underdog. Still, it’s thrilling to see signs of a Trump rebellion building in the Solid South, the Republican base where religion, racism and love of guns have advantaged Republicans since Richard Nixon’s election in 1968.

Like countless others out there, we've been inspired by the meteoric rise of Barack Obama and his campaign. In a time when America so desperately needed a hero, along came a man to show us a brand new vision of what America and the world could be in the 21st century. In many ways, Obama is the closest thing we've ever seen to a superhero... someone who has literally inspired millions of people simultaneously to step past fear, to be brave enough to hope and to go past cynicism and imagine what we could be if we were at our best. That's the stuff of legend! And we wanted to pitch in. In that spirit we created The Obama Action Figure because every superhero should have one. Yes We Can!