The Washington Post Sunday Arts & Style section published an enormous page-size photo of leftist drag queen Taylor Mac in the middle of the section with the headline in italics:

'Truth to power': a genius in drag stages an epic look  at U.S. history

Taylor Mac is so indulged by the Left that he was awarded a $625,000 "genius grant" from the MacArthur Foundation. He has created a 24-hour, 246-song musical "masterwork" titled The 24-Decade History of Popular Music. The Kennedy Center will stage about two hours of it on March 6. A YouTube video included in the Post story features Mac screaming through a verse of Amazing Grace. Karen Heller reports: 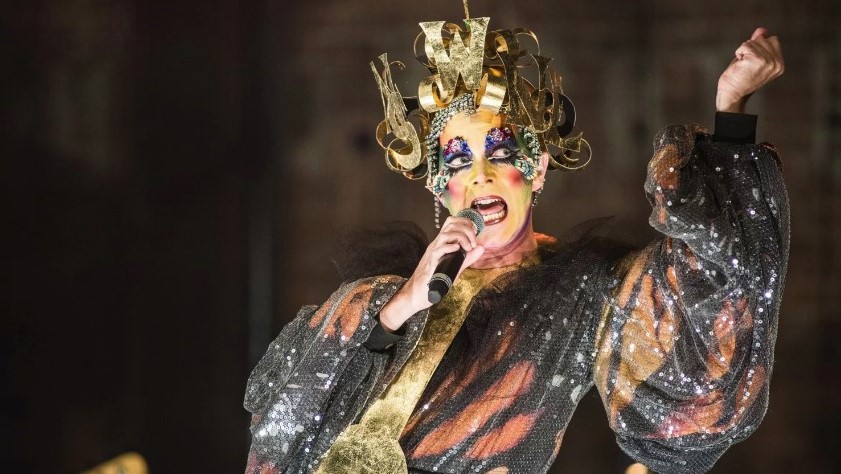 Last fall, he was anointed a MacArthur Fellow, garnering the so-called “genius” grant, possibly the first drag artist to do so. (MacArthur spokesguy: “We don’t track things like that.”)

His bold, adjective-defying stage appearance is misleading. “Taylor is very much the fool in the king’s court talking truth to power. That is something you could miss if you were just looking at pictures,” says [his music director Matt] Ray. “This is a giant community-building project” and always includes audience participation.

The Washington performance will concentrate on songs of resistance, including the civil rights movement.

“You can look at the way I’m dressed and know that I’m not a fan of the president,” Mac says. “But, you know, now’s the time, baby.”

This wouldn't be a typical LGBT story without wacky demands about pronouns:

Mac prefers the pronoun judy, as in Garland, but always lower case — though onstage he is a militantly ALL-CAP performer. (Mac’s pronoun of choice will not be used here so as to avert massive hair-pulling and possibly a Masada-like revolt by editors.)

A congenial fellow, Mac is fine with he. He’s just putting judy out there. [Italics in the original.]

(A reporter for the leftist newspaper the Guardian actually went there: "Born and brought up in California, Mac studied at the American Academy of Dramatic Art in New York and wrote judy’s first play, The Hot Month, in 1999.")

Mac doesn't want people to ask if they like his "epic" work (because they won't?). It treats art as consumption.

Mac prefers to leave audiences annoyed and confused and, if they sign up for the full 24 hours, exhausted.

“I want to take theater outside of what you know,” he says. A benevolent, high-heeled dictator, he orders audiences not to clap. He encourages them to hiss.

“That frees the work from the global capitalist economy you know,” he says. “You’re basically saying to the audience, ‘I give you permission to make this crazy sound when you like something or you hate it, and it’s the same sound.’ ”

Mac is the drag queen who rails against capitalism, emphasizing experience over consumption. “I believe you can make a living as a theater artist, but in order to do so, without making work you don’t like,” he writes in his personal manifesto, “you might need to think about falling in love with verbs more than nouns.”

....“Why would you want to be the person who is oblivious to the struggles of this citizenship?” he says. “In a time when a salesman is the president of the United States, I think we need to start to protest the tools of production because that’s how he became the president, by reducing everything to a slogan or a sound bite.”