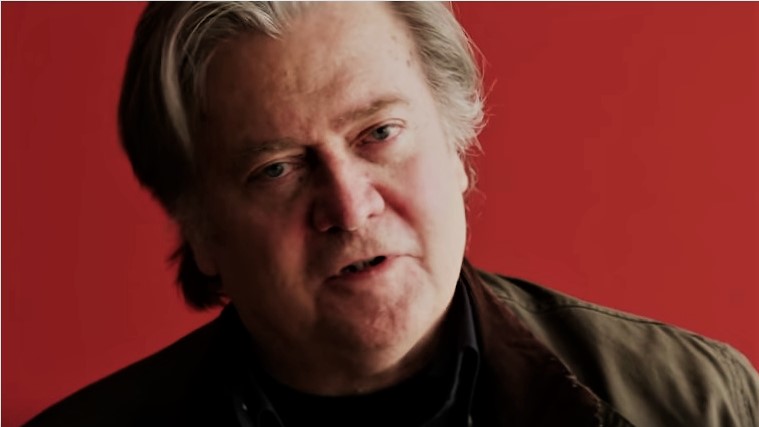 For the paperback edition of his book, Green chronicled Bannon obsessing over Oprah Winfrey's speech at the Golden Globes as posing the "existential threat" of a "matriarchy." Then Gross started preaching:

TERRY GROSS: I'm going to do a partial list - I think it's only partial - of people in the Trump administration who have been accused of sexual harassment, sexual molestation or sexual assault. We'll start with Steve Bannon himself, who was charged with three misdemeanor counts of domestic violence in 1996 by his now ex-wife -- violence, battery and dissuading a witness. Recently staff secretary Rob Porter; Corey Lewandowski, the former campaign manager; Andrew Puzder, who was the first choice for secretary of labor but the charges -- the allegations against him nixed that. Speechwriter David Sorensen; Okay, Bannon's candidate to replace Jeff Sessions in the Senate, Roy Moore -- all those women coming forward and saying that they were molested by him as teenagers.

JOSHUA GREEN: Well, and let's not leave Trump himself off that list, right?

TERRY GROSS: Oh, oh, I'm sorry. (Laughter) I did not mean to leave him off.

At least Gross had the sense to recall that NPR is having its own #MeToo problem: "First of all, I want to say that I recognize that the White House isn't the only place in which there are sexual harassers, molesters or assaulters. You know, there's been sexual harassment allegations within public radio. So I just, you know, I don't want to sound clueless about that."

But Gross made no attempt to make a similar list of suspects at NPR. Start with senior news VP Michael Oreskes; news executive David Sweeney; longtime Prairie Home Companion star Garrison Keillor; The Takeaway host John Hockenberry, who harassed women from a wheelchair; and the latest casualty, Tom Ashbrook, dismissed from his national show On Point for an abusive work environment with unwanted physical contact, although it “was not sexual in nature, and did not constitute sexual harassment,” according to his employers at Boston University.

So maybe Gross's moral outrage over an "epidemic" rings a little tinny? Gross can spend a half-hour lauding Anita Hill and her unproven charges of sexual harassment against Clarence Thomas, but she hasn't "wasted" any Fresh Air time discussing NPR's abuse problems.

And then Gross turned right back on Bannon:

GREEN: Yeah, I think that's exactly right. And, you know, he is chiefly interested in propping up Donald Trump and in finding a way back to power and influence within Trump's orbit.