Judy Woodruff Laments: An 'Industry' of Critics Rip Media That 'Holds Democracy Together'

On Tuesday, The Washington Post held a series of panel discussions and aired live video around the theme "Americans & The Media: Sorting Fact from Fake News." In one segment, Post political reporter Dan Balz talked to PBS NewsHour anchor Judy Woodruff and Fox Special Report host Bret Baier. Woodruff lamented "an entire industry" that is ripping the media that "holds democracy together." 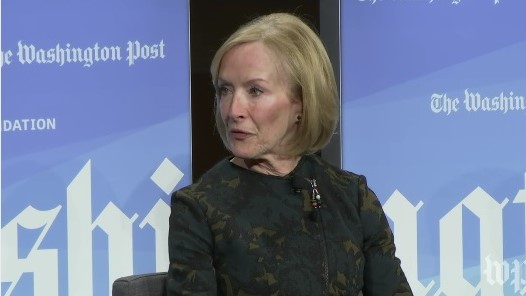 DAN BALZ: Judy you said something recently [in November] I want to read to people: "You shouldn’t go into journalism if you want to win a popularity contest. If you’re doing your job, there are always going to be people who criticize your reporting. But we’ve never been at a place like we are today where there’s practically an entire industry around criticizing the media and holding the mainstream media up as suspect [he edited out ‘and out to destroy an entire political philosophy in this country’]. I think the term 'fake news' has done a lot of damage to the media." Describe the damage.

JUDY WOODRUFF: The damage is in the minds and the eyes of people who are consumers all across the country. And you see it in the polls. You see it in this [Knight Foundation] poll, a lessening of trust in the news media. I believe – it sounds corny, but I believe so passionately that a free press, free media, the role that we play, news media in our democracy, is part of what holds democracy together. And if enough Americans start thinking the press is not to be believed, that we are to be shoved to the side, regulated, or treated, controlled in some way, then I think we’ve got real problems. Even if it doesn’t get to that point, and they just don’t believe what we’re doing, then I think our democracy is weakened, and I think that’s what’s happening.

Woodruff can't seem to make up her mind. Journalists shouldn't be concerned about popularity, but anyone who criticizes the media is part of a malignant industry "weakening democracy." She can't abide critics who would insist that the media are all about strengthening Democrats and weakening Republicans. Look at Woodruff lobbing softballs at Joe Biden and hardballs at Mike Pence.

But Woodruff claimed that unlike cable news shows, she believes in doing "straight reporting."

Baier said attacking the press broadly "hurts," but added "I think people forget we have a checks-and-balances system. Where you do have the president and whatever he’s doing, the administration. You have Congress. And you have the U.S. Supreme Court. And I think that when push comes to shove, the First Amendment is going to be defended. There’s not a risk that suddenly this is going to become a banana republic and we’re all going to Gitmo because we did a bad story. I think some of that has to be put into perspective, but at the same time, push back and make sure we’re covering it fairly."