The Washington Post devoted a news story on Tuesday to President Trump’s attendance at the college football championship in Atlanta. But the story by Marwa Eltagouri and Sonam Vashi concentrated on tiny protests by leftists. The “smattering of boos” was defined as news. They began:

President Trump was greeted by a roar of cheers and a smattering of boos as he stepped onto the field Monday night for the biggest game in college football, while activist groups demonstrated a president who has used sports to incite political battles.

The Post seems unable to use the word "liberal" or "leftist" directly, so "activist groups" are as descriptive as they can get. And who is "using sports to incite political battles?" That didn't start with Trump.

First, the Post duo promoted the NAACP’s Atlanta chapter, which didn’t muster any street protests. They “encouraged those going to the game to wear white and wave white towels if they disagreed with Trump’s policies and statements, a move meant to mock conservatives who sometimes call liberals ‘snowflakes.’ The organization also asked people to tweet during the game about the alleged falsehoods told by the president during his first year in office.” (The hashtag was #AllTrumpsLies.)

An expected 100,000 came to Atlanta for the football festivities, but the Post was fascinated by 30 “anti-fascist” demonstrators who demonstrated outside CNN. 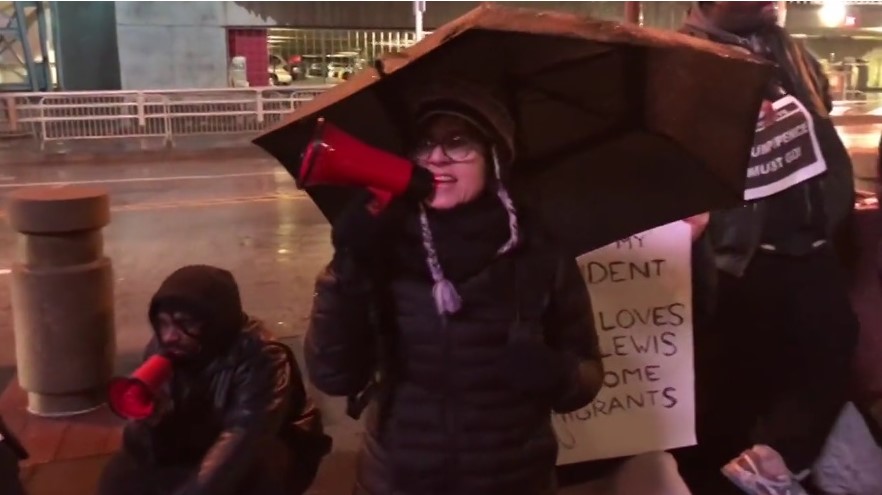 A second group, Refuse Fascism and Refuse Fascism ATL, held a protest outside CNN’s world headquarters nearby to support the athletes Trump has criticized for kneeling during the national anthem to protest social injustice and police brutality. As of 7 p.m., about 30 people marched in the rain, some holding signs that read “Keep your tiny hands off my button,” and “The City of Atlanta + Cobb County Hates Trump.”

Jack Turner, one of three Atlanta organizers of the protest, said “Trump is carrying out the consolidaton of fascism, and I think when he comes into a place like Atlanta – or anywhere in the world – he need to be met with resitsance. He needs to be met with protest, nonviolent protest.”

Eltagouri and Vashi even dragged in anti-Trump lyrics from the game’s halftime performer, rapper Kendrick Lamar, such as “Donald Trump is a chump, know how we feel, punk/ Tell ’em that God comin’/ And Russia need a replay button, y’all up to something” in “The Heart Part 4.”

The Post duo at least added one Trump fan:“The protesters were often met with negative responses to those passing by to attend the game, with on Alabama supporter screaming ‘You’re all idiots!’”