On the front of Thursday's Style section, Washington Post media reporter Paul Farhi wrote a piece on blazing-hot author Michael Wolff and his Trump book Fire and Fury. The headline was "A whale of a Trump tale, but is it fishy?" Inside, the headline is "Wolff made up quotes, some of his sources say."

After recounting all the hot stories about Trump and his former aide Steve Bannon, that revelation is tucked inside on page C-4: 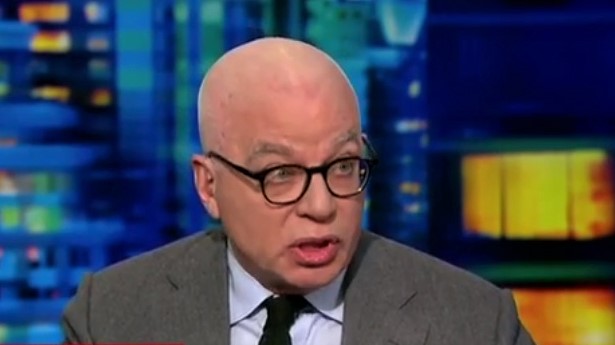 Wolff, for example, writes that Thomas Barrack Jr., a billionaire friend of Trump’s, told a friend that Trump is “not only crazy, he’s stupid.” Barrack on Wednesday denied to a New York Times reporter that he ever said such a thing.

Katie Walsh, a former White House adviser, has also disputed a comment attributed to her by Wolff, that dealing with Trump was “like trying to figure out what a child wants.”

White House press secretary Sarah Huckabee Sanders added her own skepticism during her daily briefing on Wednesday. “We know the book has a lot of things, so far that we’ve seen, that are completely untrue,” she said. She was not specific, but Sanders added that Wolff’s characterizations of White House operations were “the opposite of what I saw.”

Wolff, 64, has said his book was based on 200 interviews with White House and campaign staffers, including Bannon. He didn’t respond to multiple requests for comment.

We should expect that NBC's exclusive interview with Wolff on Friday's Today will focus on the fake-news question. Farhi also found this pattern in Wolff's media columns for New York magazine:

Judith Regan, then a hotshot book editor who had been a classmate of Wolff’s at Vassar, vigorously disputed almost every paragraph of Wolff’s column about her. She said she hadn’t had a personal conversation with Wolff in 30 years.

Wolff’s response: “She doesn’t speak to me. . . . I suppose the world is full of people who no longer speak to me.”

New Republic columnist Andrew Sullivan accused Wolff of putting words in his mouth when Wolff wrote in 2001 that Sullivan “believes that he is the most significant gay public intellectual in America today.” Sullivan said he never made any such claim.

Farhi also thought it was fishy for Wolff to claim Trump didn't know who John Boehner was when Fox News boss Roger Ailes recommended him as a chief-of-staff pick. This is how the story ended:

Even Wolff’s anecdote about Trump being unaware of who Boehner was last year seems a bit suspect. The reason? Trump had tweeted about Boehner multiple times since 2011. In September 2015, for example, Trump tweeted this: “Wacky @glennbeck who always seems to be crying (worse than Boehner) speaks badly of me only because I refuse to do his show — a real nut job!”

Trump-bashers on MSNBC are already making excuses. Host Stephanie Ruhle championed the view that “Even if not all of it is true, the spirit of the book is."