S.E. Cupp: Slamming Media Is 'Dangerous,' Fox News Is Like a Dictator's Tool

CNN Reliable Sources host Brian Stelter offers a weekly guest list full of liberal journalists, and then occasionally he interviews a conservative....if the objective is to offer a conservative underlining one of Stelter's favorite points. That happened again on Christmas Eve, when S.E. Cupp, host of a talk show on HLN (a sister network of CNN), sounded the company talking points on how the "mainstream media" are a "pillar of democracy" and attacked Fox News as resembling a "very friendly" dictator's channel.

First, Cupp explained to Stelter that the media's ardor against Trump has sharpened the sense among conservatives that the media are liberal. But then she tickled Stelter's ears by repeating his charge from earlier this year that criticizing the press is somehow tantamount to a "dictator tactic."

Neither Cupp nor Stelter mentioned the kind of lavish praise Barack Obama received during his presidency, or Obama's criticism of Fox News. Neither of those facts apparently signaled creeping authoritarianism. Implicitly suggesting that criticizing media is undemocratic/unpatriotic is just as easily caricatured as oppressive.

STELTER: Ten years ago, it was Sarah Palin calling the press the lamestream media, right? The liberal lamestream media. Now Trump has all these various insults that he uses against the media. Do you think that it has had a corrosive effect this year?

Look, you know, I was talking to Cokie Roberts, a veteran journalist, about this recently, and she said, look, the media doesn't need to be popular. That's not our job. And so we shouldn't necessarily worry about popularity or our approval in the polls.

It's dangerous because it undermines the real importance of this pillar of democracy -- a strong, credible free press. So, and he does it with lots of different institutions to try to undermine the trust in them, so that he is the only entity that is trusted by the public.

It's the popular dictator tactic, frankly, not to sound, you know, overly dramatic. It is what people do. But with particular attention to the press, he is really trying to erode trust, and it seems to be working. 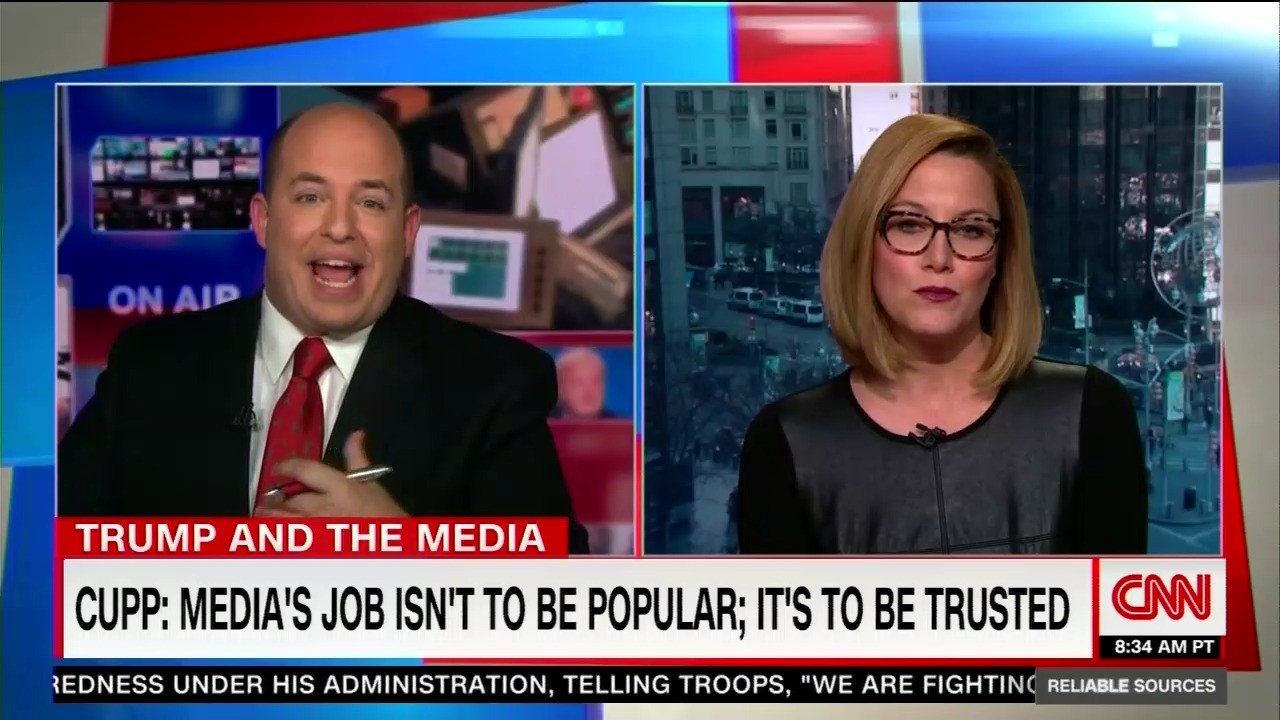 STELTER: You used the D-word. I have been thinking about the A-word, autocracy. There were a lot of concerns earlier in the year -- I talked about them on this program -- about whether we were seeing this authoritarian drift in the country led by Trump. And, frankly, I don't know now, at the end of the year, how much I agree with that or not. What's your take?

CUPP: Well, certainly, when it comes to some in the media. I have watched a lot conservative...

STELTER: Meaning people talk about it?

CUPP: No. Meaning, when you watch Fox News, for example, one of the hallmarks of, you know, an autocracy, of authoritarians is having a press that's very friendly and a press that...

CUPP: Yes, that the ruler can go to, knowing he will have a friendly audience, knowing he won't be challenged. It's not just Fox News that has become a very -- too comfortable home for Donald Trump. I have plenty -- I know plenty of conservative journalists whom I enjoyed and respected who have really decided to sort of cover for the president. That's dangerous, too. That's just as dangerous as liberal bias. It's just as dangerous as fake news.

So, you know, the hallmarks of autocracy-ism [?] and authoritarian regimes are not just on the side of the president, of Donald Trump, but you see that sometimes in the press as well.

So all the conservatives have lost her respect as they "covered for the president," as opposed to Cupp, who is energetically covering for the press, which is apparently never dangerous. Stelter at least asked if this creeping-dictatorship line is polarizing (which could spur a one-word answer: Duh.).

STELTER: Now, when programs like this one talk about authoritarianism or question the president's mental fitness, does that just cause further distrust in the press and just make the polarization even worse and worse and worse?

CUPP: Well, look, you know, we all have to shy away from the kind of hyperbole that the president himself uses. [Said the pundit who just said “dictator tactic.”] It's not responsible when he does it, but it's definitely not responsible when we do it. I think it's completely fair to have an analytical conversation about some of the normalizing of the way the president treats the press, and vice versa, and how dangerous that might be.

To point out where we see, you know, hallmarks of authoritarianism, I think that's honest and fair. We don't have to -- you know, we don't have to fret that America is going to become a dictatorship. We still have checks and balances. We are one of those checks and balances. But I think it's fair. To pretend that all of this is normal, to pretend that we can just sort of lay this administration over -- an overlay over the last, and sort of trace around the subtle differences, no, there's no way to do that. So I think we have to have honest, fair, challenging conversations without getting crazy and hysterical, and hyperventilate about it.

Apparently, the press is always a check and a balance, and anyone who seeks to check or balance media power is somehow using a dictator's handbook. That's convenient spin for the press.