Tim Graham
Font Size
It’s not a surprise that Time would pick the “Silence Breakers” (Sexual Harassment Plaintiffs) as their Person of the Year feature. But it is surprising that Time features so prominently NBC’s Megyn Kelly – not to talk about sexual harassers on her current show, but on Fox News. It came more than 30 paragraphs into the cover story, but Kelly sounds like an NBC employee by declaring that Donald Trump’s victory was a setback for women: 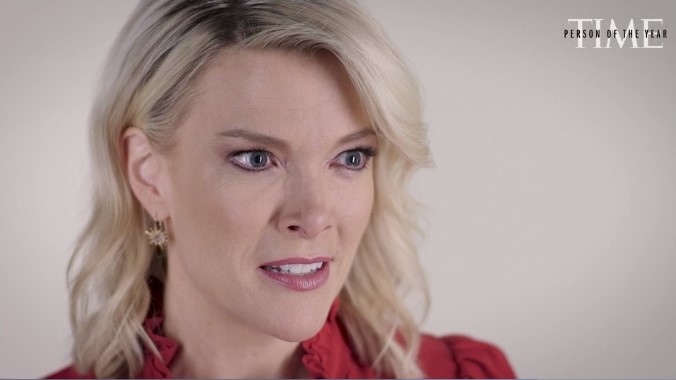 That Donald Trump could express himself that way and still be elected President is part of what stoked the rage that fueled the Women's March the day after his Inauguration....
Megyn Kelly, the NBC anchor who revealed in October that she had complained to Fox News executives about Bill O'Reilly's treatment of women, and who was a target of Trump's ire during the campaign, says the tape as well as the tenor of the election turned the political into the personal. "I have real doubts about whether we'd be going through this if Hillary Clinton had won, because I think that President Trump's election in many ways was a setback for women," says Kelly, who noted that not all women at the march were Clinton supporters. "But the overall message to us was that we don't really matter."

It's probably true that if we had President Hillary, we wouldn't be talking about sexual harassment. Because the Clintons have skeletons in that closet, and Time was always good at sticking up for them.
On the video that appears with the cover story, Kelly gets profane. Over emotional music, Kelly says “We don’t have to just live like this. I always thought things could change for my daughter. I never thought things could change for me.” Actress and Harvey Weinstein accuser Rose McGowan says women have been “conditioned since birth to be polite,” and then Kelly is sliced in: “To be ‘nice’ [finger quotes]. To be ‘kind’. To be ‘liked’. To not make waves [music pauses] – Bullshit!”
At the risk of sounding rude to Kelly, the idea of her living in some kind of oppressive bubble might seem a bit odd, since she makes an estimated $23 million a year to host a morning TV show for NBC. The "maybe my daughter won't have it so rough" sounds a bit out of touch to people making $15 an hour...or the hotel housekeepers also featured in the video.

Kelly also was quoted at the cover story’s end: 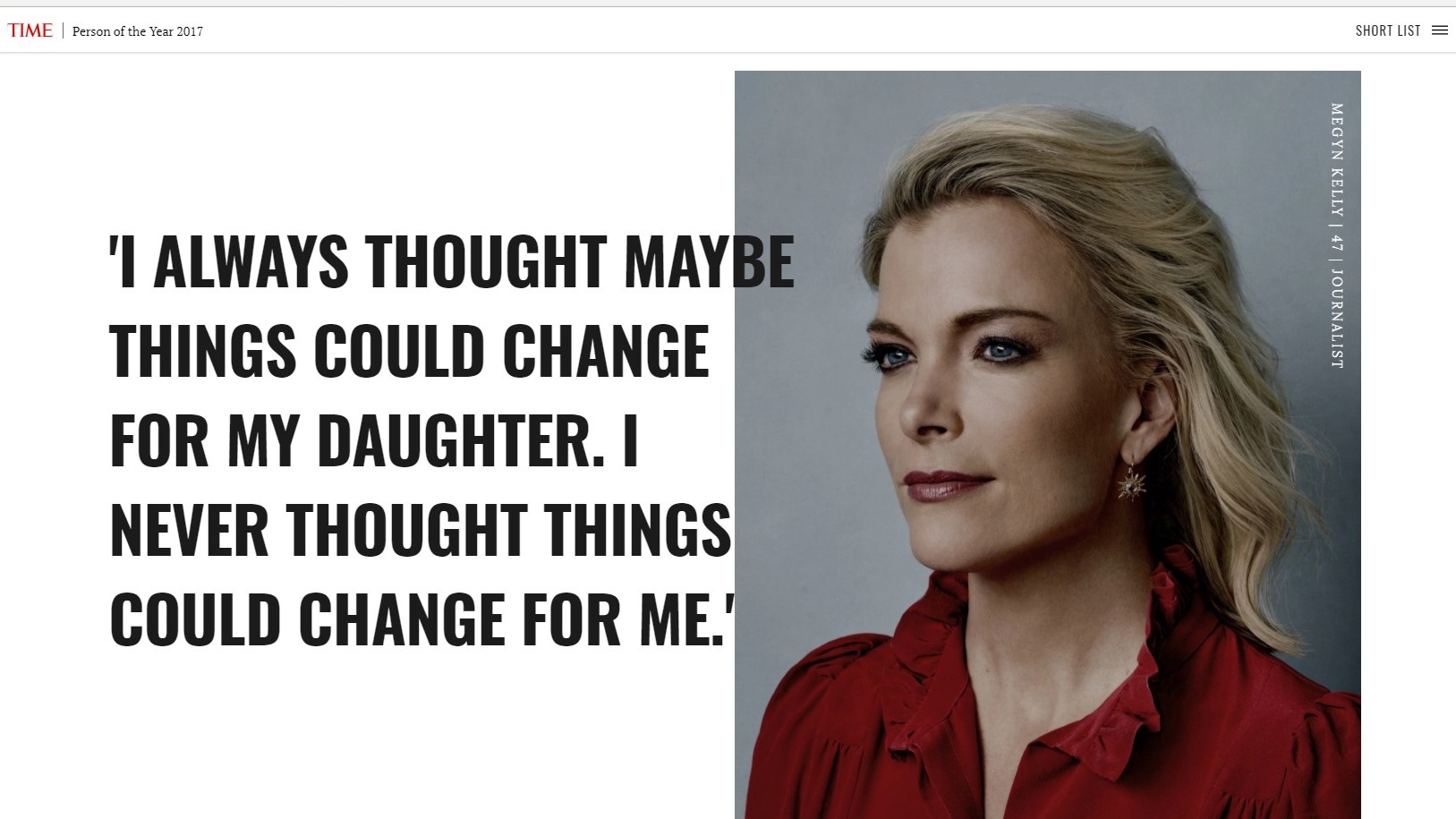 We're still at the bomb-throwing point of this revolution, a reactive stage at which nuance can go into hiding. But while anger can start a revolution, in its most raw and feral form it can't negotiate the more delicate dance steps needed for true social change....

At least we've started asking the right questions. Ones that seem alarmingly basic in hindsight: "What if we did complain?" proposes Megyn Kelly. "What if we didn't whine, but we spoke our truth in our strongest voices and insisted that those around us did better? What if that worked to change reality right now?" Kelly acknowledges that this still feels more like a promise than a certainty. But for the moment, the world is listening.

The Time cover story writers only briefly mentioned media harassers Matt Lauer and Mark Halperin (noting he worked at Time), but not Charlie Rose. They turned to Donald Trump’s accusers:

Summer Zervos, a former contestant on The Apprentice, was one of roughly 20 women to accuse the President of sexual harassment. She filed a defamation suit against Trump days before his Inauguration after he disputed her claims by calling her a liar. A New York judge is expected to decide soon if the President is immune to civil suits while in office. No matter the outcome, the allegations added fuel to a growing fire.

Now this is where it gets interesting: Is the president immune to civil suits in office? That was a question in Clinton vs. Jones (1997), when the Supreme Court ruled a president is not immune to civil litigation from before his time as president. But back when Jones sued, was Time siding with “The Silence Breakers”? No. In the May 16, 1994 issue, Time’s Richard Lacayo portrayed her and her claims as tawdry:

When she finally filed a $700,000 lawsuit against the President last week, she added a detail that launched the case decisively into the tabloid universe of Michael Jackson and the Bobbitts.  To prove her allegation, she says, she can identify “distinguishing characteristics in Clinton’s genital area.”

That should be enough for the Leno and Letterman monologues. But by now, Washington is more transfixed by the really dirty part – the politics.

Lacayo repeated the lines that the Clinton lawyers promised they would “depict Jones as a gold digger in the service of people out to destroy the Clinton presidency.” They highlighted her sister Charlotte Brown saying Paula seemed “flattered” by the attention on the day he exposed himself, and “whichever way it went, it smelled of money.”

Time wasn’t believing the accuser: “Since the scene that Jones described took place behind closed doors, no one can confirm for now whether her account is a vivid remembrance, a cynical concoction or some combination of the two.” And they concluded this was unlike the Hill-Thomas affair, in which it “was hard to think of either party as the kind of person who would not tell the truth.”

An accompanying TV critique by William A. Henry III (Headine: “How to Report the Lewd and Unproven?”) concluded:  “In a time of tabloid TV, transvestites on Geraldo and Buttafuoco docudramas galore, even consumers who deplore such stories are sure to read them. The haunting question that many editors voice last week: Yes, but at what cost?”

Time dismissed the woman’s accusations with an opinion poll. “Is Bill Clinton’s sexual behavior prior to his becoming President relevant to how he should be judged in office?” The result was 22 percent “Yes” and 71 percent “No.”

But here we are in 2017, and Time’s polling is now meant to shame the Republicans:

The accused were both Democrats and Republicans, but the consequences thus far have been limited—and often filtered through a partisan lens. In politics, at least, what constitutes disqualifying behavior seemed to depend not on your actions but on the allegiance of your tribe. In the 1990s, feminists stood up for accused abuser Bill Clinton instead of his accusers — a move many are belatedly regretting as the national conversation prompts a re-evaluation of the claims against the former President. And despite the allegations against Moore, both President Trump and the Republican National Committee support him.

That political divide was revealed in the TIME/SurveyMonkey poll, which found that Republicans were significantly more likely to excuse sexual misdeeds in their own party. The survey found that while a majority of Republicans and Democrats agree that a Democratic Congressman accused of sexual harassment should resign (71% and 74% respectively), when the accused offender was in the GOP, only 54% of Republicans would demand a resignation (compared to 82% of Democrats).

As another election cycle approaches, Americans find themselves trying to weigh one ugly act against another in a painful calculus of transgression. Is a grope caught on camera more disqualifying than a years-ago assault that was credibly reported? What are we willing to forgive or ignore or deny if the violator shares our politics? 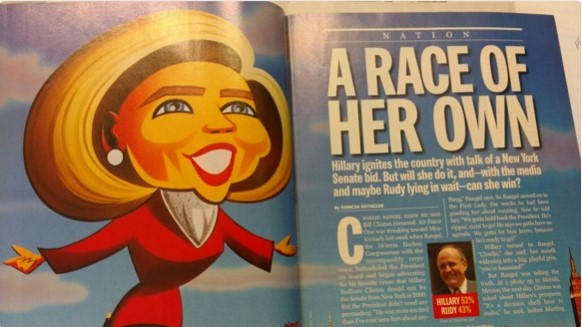 As we can see, Time magazine failed this test, ignoring Clinton’s accusers or downplaying them since the violator shared their politics. Let’s recall just how much respect Time magazine gave Juanita Broaddrick in 1999: one dismissive page in the March 1 issue...and issue a nine-page cover story on “Senator Hillary?”

Time's Adam Cohen noted the charges first surfaced in The Wall Street Journal's "vociferously conservative opinion pages.” He concluded “Broaddrick’s accusations on sordid” and "With impeachment over and the statute of limitations on the alleged crime long passed, the story seems unlikely to have much traction. Broaddrick herself says, ‘I’m hoping this absolutely goes away in the next week.’ A weary nation would probably agree."