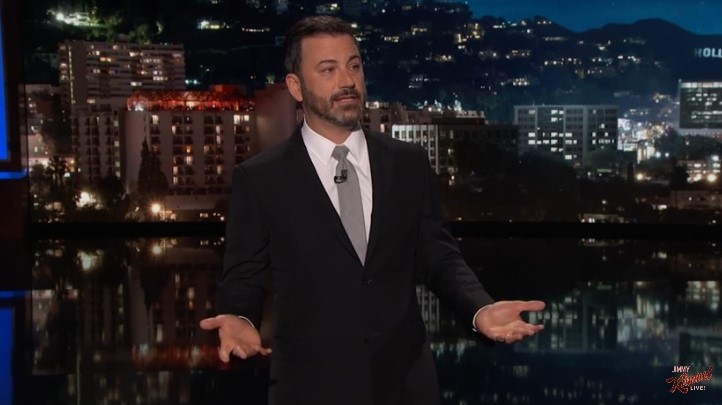 Carter began his article: “If, at any earlier time in his career, anyone had suggested to Jimmy Kimmel that people would someday be citing him as the conscience of the nation, he would surely have done the world's greatest spit-take.”

Carter claimed it was the “truth” that Kimmel didn’t intend to become a liberal activist:

The truth is, Kimmel has been acutely aware that putting himself out there on both these issues meant sticking his head straight into the political maelstrom that afflicts the nation at this moment in history. He told people, including me, that he expected heavy blowback from conservative and pro-Trump voices.

But he didn't choose either fight as much as they chose him. As a late-night host, Kimmel has never sought the mantle of political activism; events have thrust that upon him.

This is complete hogwash. Bill Carter apparently never saw Kimmel fawn all over Hillary Clinton when she appeared with him. There was no reluctance to try and help her crusade.

Carter’s article repeatedly whacked conservatives as being terrible debaters, arguing in bad faith. Kimmel was praised by gun control activists, but conservatives “weren't going to allow him a shred of credit for putting his human face on the gun-control debate.”

So when he is on the edge of emotional breakdown over his fears for his newborn son, or the massacre of innocent people in his hometown, it does not come across to most viewers as Hollywood activism; it comes across as human activism.

That absolutely none of the attacks addressed the issues Kimmel raised is par for the course in this debate. That some points are absurd -- he needed more security because of threats from people who opposed his views, and when did he say no security professional should be responsibly armed? -- is evidence that coherence has no place in ideological warfare.

Again, Earth to Bill Carter: When you have an armed security detail, it looks silly to say other people don't "need" an arsenal of firearms. Somehow Kimmel's armed hypocrisy has nothing to do with the "issues Kimmel raised." Carter just doubled down on Kimmel’s everyman authenticity:

His critics also don't acknowledge -- or simply don't care -- that he has had a real personal stake in the positions he has taken; instead they trot out the familiar trope about "Hollywood elitists" and how out of touch they are with real people. But Kimmel's public image is antithetical to elitism; he presents as entirely down to earth, even salt of the earth.

Carter admitted Kimmel made “tough points,” but didn’t acknowledge that “America’s conscience” might upset people by saying their testicles were in a sling owned by the NRA. As if Kimmel is showing "independence" from his Disney paymasters?

Certainly, Kimmel made many tough points in his editorial monologue Monday night. He suggested the politicians who have opposed what he believes is responsible gun regulation and instead constantly resort to offering thoughts and prayers "should be praying to God to forgive them for letting the gun lobby run this country, because it's so crazy."

But he also cited his own experience seeing how fires in Las Vegas when he was 13 had led to a terrible death toll -- and then real change that has resulted in laws insisting on increased fire protection. "Why would we approach this differently?" Kimmel asked. "It's a public safety issue."

None of the tweets and articles in conservative media denouncing him addressed that point.

The Kimmel puffery from the CNN Media Unit came to the CNN airwaves on Wednesday's New Day:

BILL CARTER: I think it's been sort of happenstance in a way because, obviously, the first issue, which was health care, involved his son and he got involved in that for an emotional reason. And then, the second incident is a gun control story but it's in his hometown and it obviously hit him very hard so it became a personal thing for him. He's not -- I don't think he would have taken these stands if it hadn't hit him so close to home.

ALISYN CAMEROTA, ANCHOR: No, he wouldn't. I mean, he just said I like to laugh. Basically, you hear him saying like, I didn't ask for this. I don't want to do this.

BRIAN STELTER, HOST, CNN "RELIABLE SOURCES": And that makes it all the more powerful, doesn't it?

CAMEROTA: It does make it --

STELTER: It's because he was a reluctant crusader on the subject of health care. It's because you don't expect him to speak out about gun violence that makes it all the more compelling.

CAMEROTA: But, you know, because we live in such a polarized time and he alluded to the criticism that he's getting, does he have to worry about ratings? Is this going to hurt or help his ratings?

CARTER: Well, you know, in the short-term it may have helped him a little because people are talking about it. I don't think Jimmy cares. I really don't. He got a huge amount of exposure on YouTube for this, you know. Many, many millions of hits for his comments, initially. But I don't think he's thinking about that.

I mean, you know, he knows he was going to be attacked for this from -- by conservatives and he just felt like this is an important thing. I also think he's -- I think he's seen as an honest broker. I don't think this guy comes across as a Hollywood elitist or any of those things he's being accused of.

I happen to know the guy. He's a regular guy. He's not a guy who you -- you know, drives around in limos or goes to fancy parties. He has pizza on the weekends and watches football, you know.

CAMEROTA: Do you have a sense on what this is doing to his show or to his own identity? If it's morphing into something different than just kind of goofy, late-night comic?

STELTER: Yes, we've seen that across late-night. Shows like Stephen Colbert's and others have become much more political and I think now it's Kimmel's turn. You know, this time last year no one ever thought hey, what's Jimmy Kimmel going to say tonight.

STELTER: Those words were never heard. But now, there is curiosity about what he's going to say.Yes, his show is entertaining, but these shows -- all these late-night shows are also trying to be provocative and trying to be through- provoking. Yes, many of them anti-Trump, as well.

CARTER: But really, in some ways it's so important that -- and people -- comics have always taken what's in the news. That's what they do. They make jokes about the news.

CAMEROTA: And they satirize it. But it's hard to satirize –

CARTER: And they satirize -- and none of them have been able to do it. They all came out and had to make a statement because -- and people are tuning these shows in for a laugh but you can't just ignore what's going on. And in Kimmel's case, it's hitting him so emotionally. I think it would be false for him not to speak about it.