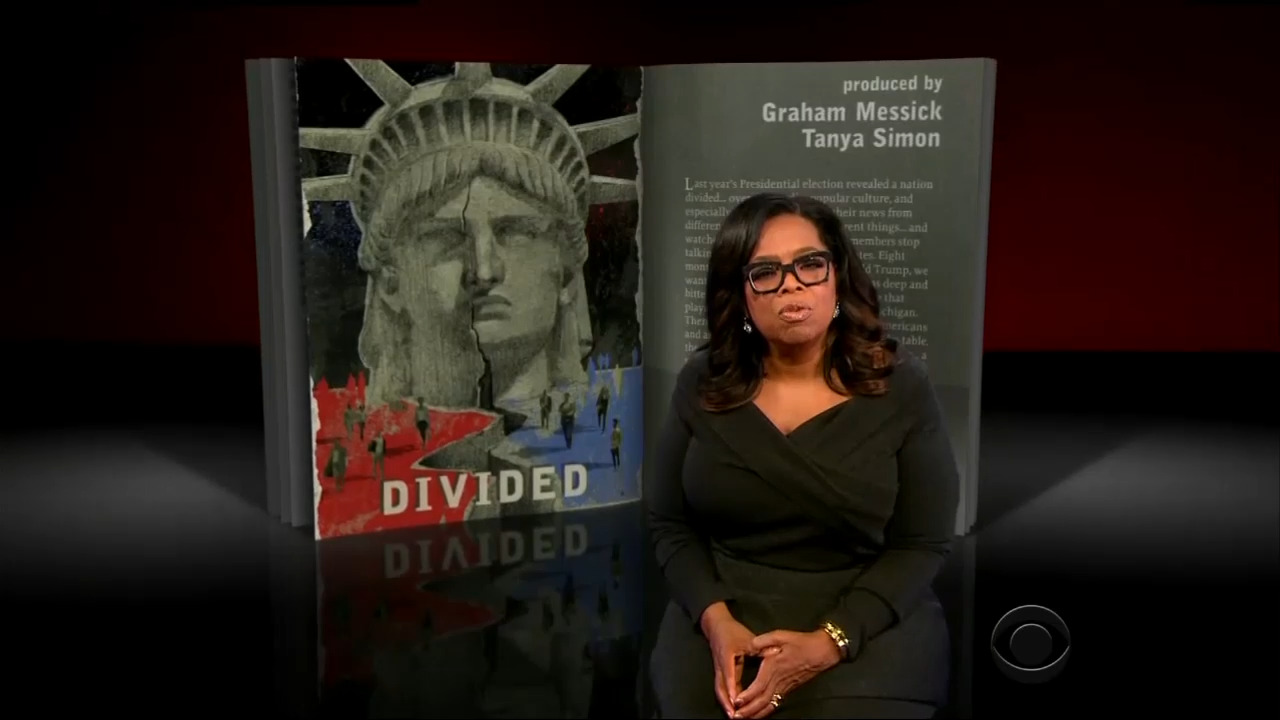 The CBS show 60 Minutes made its 50th season debut on Sunday night that included a 15-minute segment hosted by Oprah Winfrey, talking politics with a focus group in Grand Rapids, Michigan – half Trump voters, half non-Trump voters. The segment was pretty balanced, and Oprah’s moderating was...moderate. But almost everyone knows Oprah is not non-partisan.

Just last December, CBS aired Oprah doing an hour-long bucket-of-syrup interview with Michelle Obama, whom she dubbed “the coolest First Lady in U.S. history.” In June of 2016, Oprah declared her support for Hillary Clinton: “I'm with her. I have to say I'm with her and I would also say that regardless of your politics, you cannot be a woman in the world and not see that this is a monumental time for women breaking the ceiling.”

On one hand, everyone can see that if CBS News was willing to hire Oprah’s pal Gayle King as a daily host at CBS This Morning despite (or because of) her cozy partying and even vacationing with the Obamas, then they’d be willing to bring on Oprah, hoping for ratings gold. On the 60 Minutes site, CBS could barely hint at Oprah’s liberal-Democrat history, especially donating more than $60,000 to President Obama and various Democratic Parties in 2012 to get him re-elected, (She also donated $15,000 to Democrats in 1996-97.)

In her interview with 60 Minutes Overtime, Winfrey acknowledges that viewers of the story may be aware of her own political stripes. In fact, one of the participants of this week's panel told a 60 Minutes producer that he would not have participated had he known in advance that Winfrey would moderate the discussion. But Winfrey says he changed his mind after speaking with her.

Winfrey tells Overtime, "There is a certain level of credibility and trust that I bring to the table, because regardless of who I voted for or didn't vote for, I'm gonna try to be fair."

You can tell CBS wants to have its cake and eat it, too – that Oprah’s a big liberal, but we can pretend she’s not in a TV Newser interview with the show’s executive producer, Jeff Fager:

TV NEWSER: She is beloved by millions, but she’s also a politicized personality — an important backer of both President Barack Obama and Hillary Clinton’s candidacy. Any concern that viewers will see her that way?

FAGER: She and we will be judged based on the work she does here. I’m not concerned about that one bit. You can’t see that she’s coming from any particular place and we’re going to be proud of the work she does here. In terms of background and history, she reminds me a little bit of Mike Wallace, who had a full career before starting at “60,” but the one thing he did that stands out as with her was the interview and that ability to absorb.

"As fair and balanced as Mike Wallace" is not a comforting simile. The liberal nature also came up in discussing the Dan Rather debacle at 60 Minutes II in 2004:

TV NEWSER: Nevertheless, Memogate did come out of the show, and effectively ended Dan Rather’s long career at CBS News. Have you both patched up your differences?

FAGER: I was never at war with Dan. I love him and he was one of the greatest correspondents that ever worked at CBS and always felt that way. And if you look at the history of “60,” it took off the moment he joined [in 1975].

And CBS desperately wanted Jon Stewart as the end-of-show comic relief, and he was a liberal activist:

TV NEWSER: here does appear to be one irreplaceable figure: Andy Rooney [who died in 2011]. I believe you had talked to Jon Stewart about taking his place?

FAGER: Yes [the discussions went on for years]. I don’t think he ever wanted to do it, but he was tempted. He had enough on his plate.

In her promotional interview with CBS, Winfrey tried to sell herself as coming full-circle to non-partisan news-gathering: "I started out in news, roaming the streets, looking for stories, covering courts and fires, and chasing ambulances," Winfrey said. "Going out with the 60 Minutes crew for the very first time, I had all of these sense memories of sitting with the crew, setting up the interview that I hadn't done since my 20s. So it felt like a full circle moment."

It became goopier. CBS was like a religion? "As someone who's grown up watching 60 Minutes since I was a young girl, not even knowing the power, the impact, the value of the reporting, and then becoming a young reporter myself in my 20s in Baltimore, 60 Minutes was, I would say, for the first 20 years of my career like a religion.”