PolitiFact 'Fact Checks' Hillary's Book, Fails to Find a False Thing In It 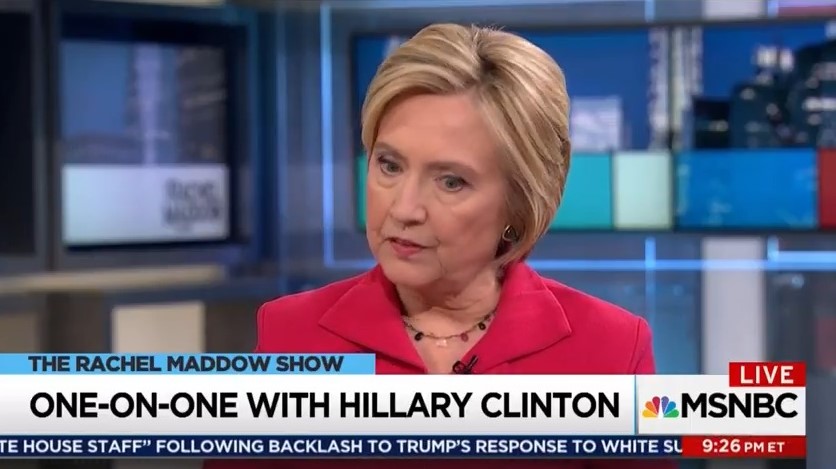 PolitiFact advertised on its home page an article on “Fact checking” Hillary’s campaign book What Happened. Don’t be shocked: PolitiFact didn’t find anything that they would call “False,” let alone “Pants on Fire.” This isn't that surprising, since the website has only evaluated Hillary once since last November -- a "Mostly False" in a complaint about voter suppression in Wisconsin in June.

Her overall count of "Pants on Fire" rulings is only 7...compared to 69 for Donald Trump.  PolitiFact started by noting that Hillary cites them in the book to defend her own honesty:

Okay, first we did what anyone did and searched for our name. We found it!

The mention of PolitiFact comes in reference to a March 2016 column by former New York Times editor Jill Abramson, who said Clinton was "fundamentally honest."

The truth is Clinton is right depending on how you calculate truth. [That’s saying a mouthful about PolitiFact.]

We fact-checked Clinton 196 times from the moment she announced her candidacy in the spring of 2015 through Election Day 2016.

Of those 196 fact-checks, 100 rated True or Mostly True. That means 51 percent of Clinton claims we fact-checked were basically accurate.

Of candidates we fact-checked at least 50 times, only one did better: Sen. Bernie Sanders….Clinton, however, does better if you only count True statements that we rated.

Last point, and it’s a big one: We don’t check every statement a politician makes. So any comparison is problematic.

I don’t think PolitiFact emphasized that when the Jill Abramsons of the world were hailing Hillary’s “fundamentally honest” nature by citing their tilted "Truth-o-Meter" ratings system.

As usual, PolitiFact was very selective and helpful in picking out claims from the book...they skipped over Hillary suggesting the media favored Trump, for example. Here's the list of what they evaluated, from serious to silly:

Fewer Americans are moving than ever before. True.

In 2008, Donald Trump sold a mansion to a Russian oligarch for an inflated price, $54 million more than he paid for it four years earlier. True.

The Women’s March was the biggest single protest in American history. True, if you add up all the march estimates around the country, even if the estimates of protest crowds are “imprecise.”

Hot sauce boosts the immune system.  They actually took that on, sort of. “Take it with a grain of salt…We don’t think the link to hot sauce per se has been peer-reviewed.”

No non-incumbent Democrat has been elected to succeed a two-term Democrat president since Martin Van Buren in 1836. True. (The "non-incumbent" part gets you past Harry Truman, who succeeded a four-term president by concluding his fourth term and then getting elected.)

Meanwhile, even Trump-bashers can find a Hillary whopper as the grants book interviews. Yashar Ali of The Huffington Post noted Hillary addressed the Kathy Griffin controversy by claiming people sold Trump-holding-Hillary's-severed-head souvenirs at the Republican convention in Cleveland. Canadian journalist Daniel Dale, a serious anti-Trumper, tweeted that was untrue: 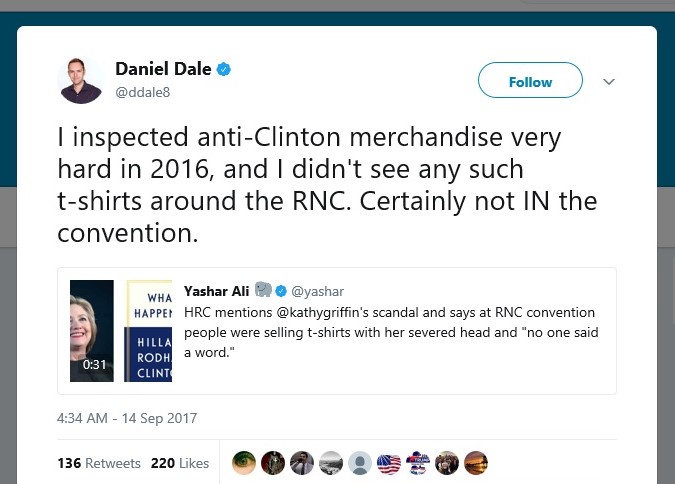 We certainly remember MSNBC host Rachel Maddow cautioning her safe-space audience they may want to look away when she showed the Worst of Cleveland Hillary Merchandise: buttons with messages like "Hillary for Prison," and "Life's a B--ch: Don't Vote for One." Maddow would have shown a beheaded Hillary thing if it had been sold on site.

We noted last summer that leftists were selling T-shirts with Hillary holding Trump's severed head, and one of Trump shooting himself in the head.

We have rated this "fact-check" by Politifact as Fully Fake. For similar analyses, please visit our Fact-Checking the Fact-Checkers site.