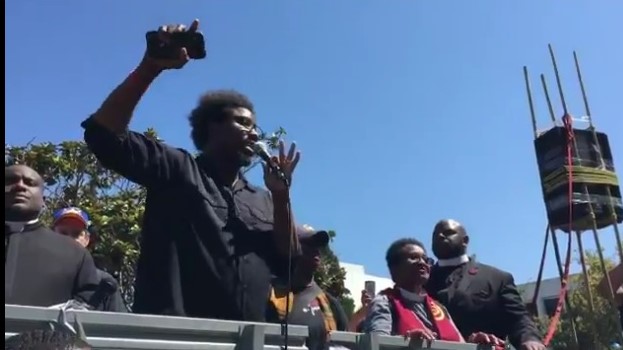 At the top of his Thursday night show on Fox News, Tucker Carlson criticized CNN host W. Kamau Bell for speaking on Sunday at a leftist “anti-hate” rally in Berkeley that included Antifa black-bloc types who later turned violent against some pro-Trump activists.

Antifa thugs were beating Keith Campbell for daring to film them with his phone when Al Letson, a black leftist journalist with the Center for Investigative Reporting – their show Reveal airs on NPR stations – shielded Campbell from the blows. He said he feared Campbell would be beaten to death.

Bell, who has hosted a documentary-style weekend show called The United Shades of America, took a bullhorn and yelled “But the thing we have to remember is that the Bay Area does not always stand for all of us equally. So when the Nazis leave, as they have left – Bye Nazis! Bye! – You have to stand up for the black people, for the brown people, for the LGBT people, for the immigrants – EVERYBODY EVERY DAY!”

Nobody expected Bell to be objective on CNN, since his last TV show (on FX) was titled Totally Biased with W. Kamau Bell. But Bell tweeted heavily about his speech and about the event – and I couldn't find a tweet saying anything negative about Antifa. Instead, he retweeted an Al-Jazeera “AJ Plus” account aping the usual Antifa lingo about censoring the haters before they kill people: “We’re not going to let them walk on our streets. We’re not going to let them spread their hate speech.” That implies the use of force.

Carlson professed amazement that CNN would let its hosts appear at a rally – not at a peaceful political hootenanny, but at a violent event.

TUCKER CARLSON: Even if they didn't use violence, Antifa would still be illegitimate, and a threat to America. None of that seems to matter to Kamau Bell. He's happy to stand up on stage and called his opponents Nazis. That's not a label use on people you want to debate. It's a label you use to incite rage. He had to know how this would end. He did it anyway.

Carlson quoted from Bell’s happy tweets from the leftist event, expressing his unity with a long list of their marginalized categories: “Black ppl, Brown ppl, LGBT ppl, immigrants, refugees, Muslims, Jewish ppl, Pagans, UU's [Unitarians], Mormons, disabled ppl, poor ppl, mentally ill ppl” and even “climate change scientists.” He rounded out the list by singling out some whites – if they happen to be “white allies marching in the streets of Berkeley, and the white half of my children.” That’s a typical joke about his biracial kids.

The Fox host asked how it would go over if he attended some violent right-wing rally where white people in masks tried to kill people and “Then we issued a statement saying we were working on behalf of whites, Christians, gun owners, taxpayers, maybe some black people, especially those who voted  Republican.”

CARLSON: How would that go over? This show would be canceled quickly and it would deserve to be canceled. If you are not willing to say you want a world safe for all Americans, equally, you are peddling hate, and Bell is. We contacted CNN to see if they had any response to another anchor stroking violence extremism as a side gig and they have not responded so far. We also invited Bell on to see if he'd be willing to defend what he did. He wasn't.

When Carlson asked media reporter Joe Concha of The Hill if this was typical media practice, Concha said no: “There is a hard and fast rule out every news organization, Tucker. That is that hosts cannot, or journalist, reporters for that matter, cannot attend rallies or speak at rallies that its newsroom may be covering. It's a conflict of interest.”

There have been controversies when hosts on other cable networks from Sean Hannity to Joe Scarborough have appeared at rallies. But Concha noted CNN host Van Jones spoke at the Women’s March the day after Trump’s inauguration, and nothing happened at CNN. Instead, CNN packaged "Activist and CNN commentator Van Jones" into an online roundup of what "celebrities and activists said in fiery Women's March speeches."

Carlson said this wasn’t a Jefferson-Jackson chicken dinner, it ended up with people being sent to the hospital with injuries. “This does seem like it is crossing some kind of line and I don't think they'll respond to it [at CNN] because then you would have to answer questions like, do you think this is a legitimate group? Is it okay to come to a political rally dressed in a mask and smash people in the face with weapons? You don't want to deal with that. They will ignore it.”

Concha said “The silence speaks for itself.”

PS: Bell, like many on the Left, cannot distinguish between racists and non-racists in the Republican Party, which is more important since Antifa will beat you bloody if they think you're racist: "If the Republican Party is a gumbo...the roux of that gumbo is white supremacy, and the core of that is the Ku Klux Klan."