Washington Post Magazine humorist Gene Weingarten identifies himself as an unapologetic liberal. On Twitter, he recently challenged President Trump (and then William Shatner) to a duel.  So it might be surprising that in his online chat in the lunch hour on the Post website on Tuesday, Weingarten began with a strong denunciation of Antifa as "human stink potatoes" who are "a larger threat to all of us" than Nazis and white supremacists. 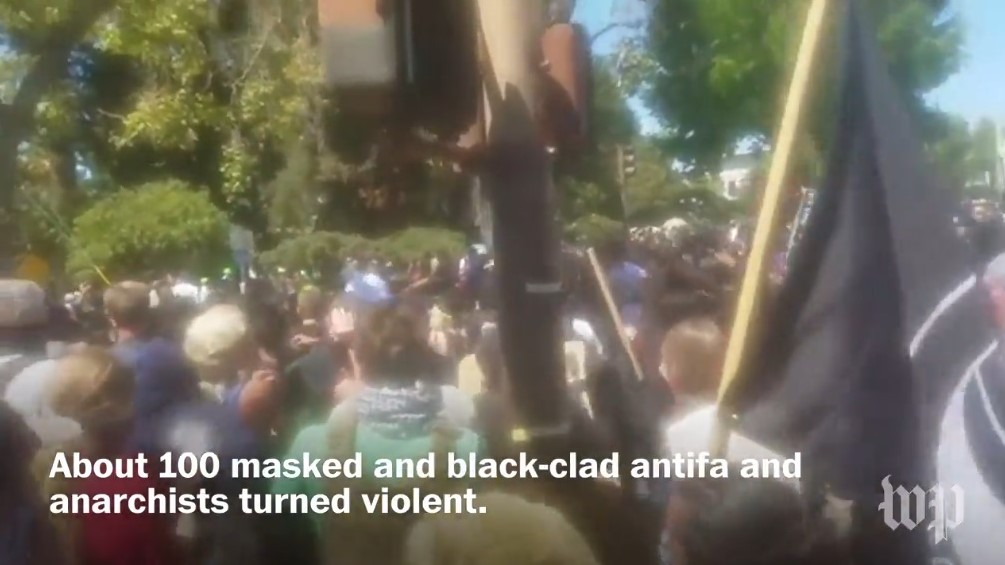 This is, alas, a real thing. This is a movement with proponents willing to argue that the right way to deal with white supremacists is to punch them in the mouth. This is coalescing into a strategy.   Just the other day in Berkeley, we had black-clad, bemasked, organized human stink potatoes converging on a legal assembly of disgusting right-wing activists and beating the snot out of them.

Now, I am an unapologetic, unrepentant, unreconstructed liberal.  But I have absolutely no doubts about this issue, for reasons moral, ethical, logical and, above all, tactical.  I don't think it takes particular political courage or wisdom to stand with Gandhi and Lao Tsu and Lech Walesa and MLK (with bitter irony, Berkeley assault happened in the city's MLK Park) in supporting nonviolent protest over the remedies favored by, say, an otherwise anonymous Twitter user whose handle is "Devan Punch a Nazi."  (Devan likens NOT punching a Nazi to Neville Chamberlain appeasement.)

Is it possible my argument really has to be made, in 2017? Apparently. The violent left may not be as amoral as white supremacists -- their underlying cause is noble, not noxious -- but in my view, they present a larger threat to all of us. Neo-Nazis and white supremacists seem to have the tacit support of our dreadful president, but they are still a bunch of grievance-nursing nitwits living in their parent's basements. They have no agency and no dignity and are laughable.  Let's not turn them into victims.

Plus, mob rule sucks. It is the sign of a society in its death throes.  We are nowhere near that; we are suffering through a trying period that will, in the end, define who we are.  And we are not them.

By seeking to impose their will through violence, the antifas are playing into the hands of the haters. This is exactly what the white supremacists want, because by normalizing violence, Antifas allow bottom dwellers like our president to create false equivalencies: There was violence on both sides, see? The white supremacists are ... victims, now.

Several of the chat participants agreed with Weingarten, and several were distraught. One said “white supremacists are terrorist organizations and not entitled to free speech,” and “I am very saddened by the fact that your opinion seems to be do nothing, that the white supremacists are just a bunch of jackbooted losers living in their parents basement. This is so ridiculously untrue. They are attempting to recruit young white college kids....I am very disappointed in you.”

This one was even harsher about free speech and more supportive of Antifa:

The white supremacists in Charlottesville were not exercising a right to free speech, they are domestic terrorists by definition: use of violence and threats to intimidate or coerce, especially for political purposes. Free speech has nothing to do with the fact that they carried torches and many armed, this is intimidation, plain and simple. They use the exact same means to recruit followers that ISIS does, they use the same money raising techniques and the same disinformation methods. Therefore, they are a terrorist group and I have no problem shutting these guys down. Would anyone issue a permit to ISIS supporters to conduct a “Free Speech Rally”? I think not. By these definitions, Antifa is not shutting down free speech. While I personally don’t advocate the violence that Antifa does, I kinda get where they’re coming from.

Weingarten concluded by musing philosophically: "I am worried about these people. They exist in reaction to Trump. Everything bad exists because of Trump."