On Tuesday morning, NPR’s Morning Edition skipped over an inconvenient part of a leftist chant as they ripped down a statue honoring the Conferate soldier in Durham, North Carolina. Jeff Tiberii of NPR affiliate WUNC-FM began by reporting:

TIBERII: As chants of ‘No KKK, No Fascist USA’ bounced off the old county courthouse in Durham, yellow rope was tied around a statue of a Confederate soldier. It was then pulled to the ground, and the crowd erupted. (Cheers and screaming). Some demonstrators took turns kicking, screaming, and extending middle fingers toward the monument.

Tiberii left out an important third of the slogan, the first third: “No cops.” He and NPR were exposed by a liberal-media colleague, Los Angeles Times reporter Jaweed Kaleem:

The same day, demonstrators in Durham, N.C., cheered as they used a lasso to topple a 15-foot statue of a Confederate soldier and started kicking its head.

“No cops, no KKK, no fascist USA!” and “We are the revolution!” they chanted.

The statue had stood since 1924 with a dedication to “the boys who wore the gray.”

Protesters held up a sign reading “NO TRUMP, NO KKK, NO FASCIST USA.” NPR didn’t mention the “No Trump” part, either.

The local Durham Herald-Sun team reported the Trump sign as a chant, and notice that the demonstrators are on the dictatorial fringes of the radical left:

“Tactics are changing, which means that our strategies need to change, our unity needs to escalate and our demands to fight back and resist domestic terror needs to escalate,” said Eva Panjwani with the Workers World Party Durham. 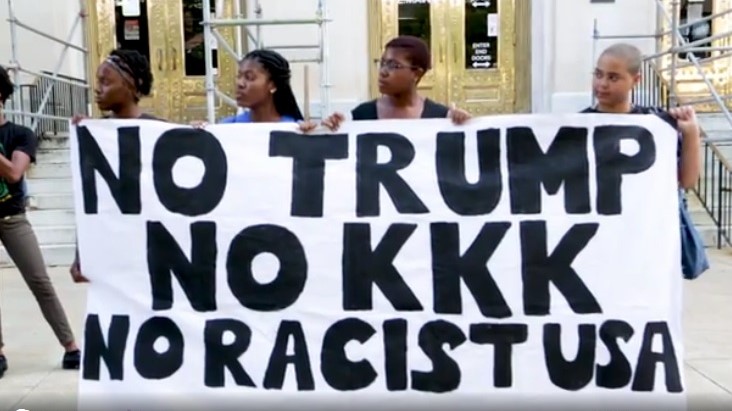 As the crowd swelled to more than 100 people, the protesters circled the statue of the soldier holding a muzzle-loading rifle and chanted “No Trump! No KKK! No fascist USA!”

Groups at the rally included members of the Triangle People’s Assembly, Workers World Party, Industrial Workers of the World, Democratic Socialists of America and the antifa movement.

“This is a really an opportunity, this moment of Charlottesville to see what side of history we are choosing to side with,” Panjwani said. “This is not a call to make someone to feel guilty or ashamed. This is a call to say this is an ask from people of color to say which side are you on.”

Conversations about loving your neighbor have not worked, she said.

Alissa Ellis, of the Workers World Party Durham branch that was a participant in the Charlottesville protest, said people need to embrace multiple tactics because that is what kept her safe.

“We need to shun passive, white liberalism” that elevates whites voices over black and brown voices, she said.

For people who don’t know, the WWP is a communist party, so the chanting against oppression sounds a little tinny. Their website currently sticks up for North Korea’s “need” for a nuclear deterrent against the capitalists. The cop-hatred is right there in their national party's statement on Charlottesville:

...the police and other repressive forces of this capitalist “democracy” are no protection against the ultra-right. Indeed, they allowed the gun- and club-toting bigots to hold a Nazi and Klan-type “torchlight” parade through the city — something that would have been unthinkable just a few years ago. The progressive movement needs to continue to be self-reliant, combative and united...

On Aug. 14, youths in Durham, N.C., tore down a Confederate statue with their own hands, expressing their fury at the murder in Charlottesville.

Long live the independent struggle of this new progressive movement against the fascists, the cops and the capitalist establishment!

If these people weren't communists, it would be a little weird that the Left would rip on the policemen, when the cops actually stood around and let them rip this statue down with no arrests.

NPR just whitewashed these communists as somehow non-ideological. They began the story by reporting “A group of activists” ripped down a statue, and the online story was headlined “Activists Topple Confederate Monument In North Carolina.” Tiberii concluded by noting “in North Carolina, state lawmakers passed a measure banning municipalities from removing these statues. On Monday night in Durham, the people took the matter into their own hands. For NPR, I’m Jeff Tiberii in Durham, North Carolina.”