Everyone expected the liberal media to hound President Trump to denounce his "base" of white supremacists and neo-Nazis specifically after the vehicular homicide in Charlottesville on Saturday, and once other Republicans like senators Marco Rubio and Ted Cruz showed how it was done, the media pressure intensified. Cruz denounced "A grotesque act of domestic terrorism" and proclaimed "The Nazis, the KKK, and white supremacists are repulsive and evil, and all of us have a moral obligation to speak out."

But it takes a special kind of liberal-media jerk to denounce the actual Republican Nazi-denouncers as just positioning for the 2020 campaign. Witness New York Times reporter Eric Lipton on Sunday faux-apologizing for his cynicism: 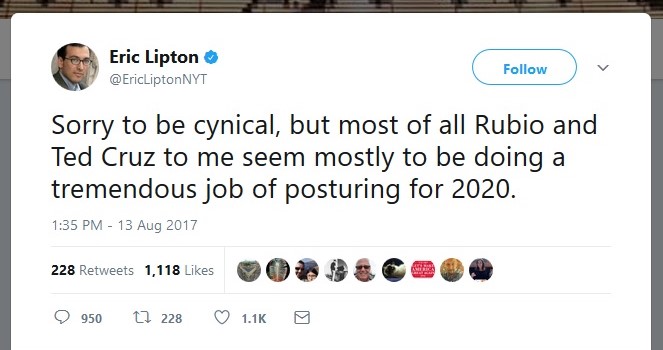 Conservatives were delighted to see Sen. Ted Cruz rebut Lipton with brute rhetorical force on Sunday night about the newspaper that shilled for Stalin: 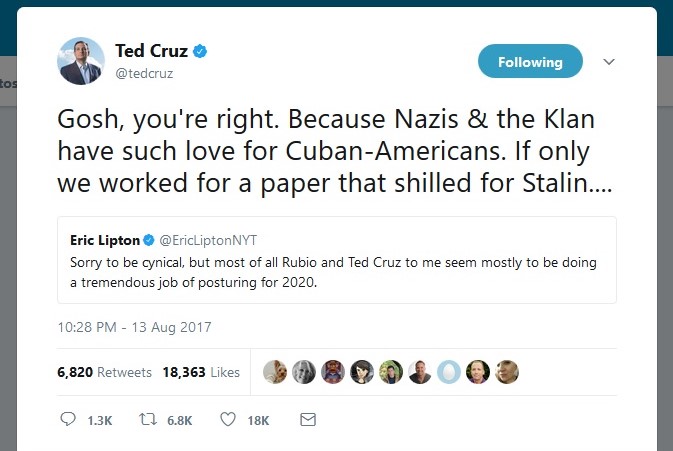 Cruz also tweeted "Too many schools don't teach NYT's shameful history covering up Soviet atrocities." He linked to the Wikipedia page on Stalin shill Walter Duranty. Or he could link to Arnold Beichman noting Duranty wrote "What are a few million dead Russians in a situation like this? Quite unimportant." Now that cynicism makes Eric Lipton look like a piker.

PS: Lipton's liberal bias is also clear in his recent timeline....he's only tweeted out or retweeted 15 times this morning on his front-page report on Sinclair headlined "How a Conservative TV Giant Is Ridding Itself of Regulation."