Washington Post media blogger Erik Wemple wrote a profile of CNN New Day anchor Alisyn Camerota that was posted Thursday, but the first eye-catching thing is she has a new novel coming this summer about a morning cable-news anchor working for a CNN-like network with the letters FAIR: 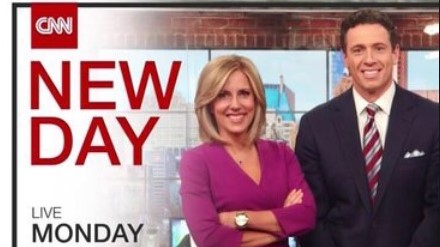 Bouncing among local TV and cable news outlets has vested Camerota with some stories — stories that she has adapted for a novel, Amanda Wakes Up, due out in late July via Viking. The storyline follows anchor Amanda Gallo through her travails on a morning show — Wake Up, USA! — of FAIR News network. There are misogynistic emails from viewers, social-media backlashes and the cold shoulders of Brooklynites who despise the [fair and balanced?] worldview of FAIR News.

Cable-news watchers will appreciate the insider sensibilities that emerge from the narrative. “I think generally stories about the tax code are a little wonky, but if we make it about class warfare, that could work,” says a cable newser in the novel.

In an author’s note, Camerota writes, “What do you do when you know someone isn’t being honest? How do you check your bias at the door? … How do you respond when you can’t wear pants? I didn’t have the answers back then, but handing these challenges to a fictional character somehow helped me figure it out.”

The Amazon page for the book – pitched as a mélange of The Devil Wears Prada and Primary Colors -- displays a dust-cover blurb from her Time Warner teammate Samantha Bee: “A hilarious, eye-opening glimpse into the TV-news trenches, from one who’s had to navigate them backwards and in heels.” It's also promoted by MSNBC host Nicolle Wallace.

This wacky CNN notion that they are an utterly nonpartisan Centrist News Network is claimed in the Wemple article. Fox is somehow hyperpartisan, but Chris Cuomo yelling at Republicans is the very opposite:

The open floor plan at CNN, however, means hard news and panel discussions at every hour — and, thus, more opportunities for people like Camerota. “When you think of other cable news networks in the morning and in the evening in particular, they have partisans,” says Zucker. “At CNN, we have personalities.… I don’t think they’re interchangeable, but they are not partisan and that is the big difference, and it’s the reason there’s a lot of running room.”

A nice spot, in other words, for a woman who was running away from a stalled career….Meaning: Camerota escaped a couple of years before veering into a Fox & Friends cul-de-sac. “It is one of the things that appealed to me as I watched her,” says Zucker. “I knew she wasn’t getting dragged into ideological morass, and so I knew that she was a real journalist.” As part of his scouting efforts, Zucker concedes he would tune into Fox News’s morning broadcasts. “Nobody needed to show me tapes; nobody needed to tell me who she was; nobody needed to tell me how to spell her first name,” he says.

Wemple went into great detail about an old event: a battle inside the Fox studios on December 5, 2010, where she was allegedly ordered to offer talking points about taxes and the rich, arguing how raising their taxes would mean less charitable contributions:

No longer does Camerota filter ideological messaging through her earpiece. “At New Day, I don’t get any marching orders,” says Camerota.

This is where Wemple called and offered me a chance to rebut:

NewsBusters, the website that polices the mainstream media’s lefty lapses, accused Camerota of “carrying the anti-Trump torch.” Tim Graham, executive editor of NewsBusters, is little moved by the notion that Camerota no longer gets political coaching now that she has left Fox News.

“It doesn’t matter if you’re not told to move to the left at CNN if you’re already in the mind-meld,” says Graham, who cites contrasts in how Camerota interviews a guy like [former Gov. John] Sununu vs. how she interviewed former Obama adviser Valerie Jarrett. Sample question: “For you to have to sit on the sidelines and watch some of the signature issues of President Obama’s administration, such as environmental regulations, the Paris climate accord, Obamacare, be dismantled: How frustrating?”

It’s also worth questioning that there are no “marching orders.” Many consider Jake Tapper one of the most independent voices at CNN, but there was the April 9 New York Times Magazine piece profiling Jeff Zucker, with this plot: 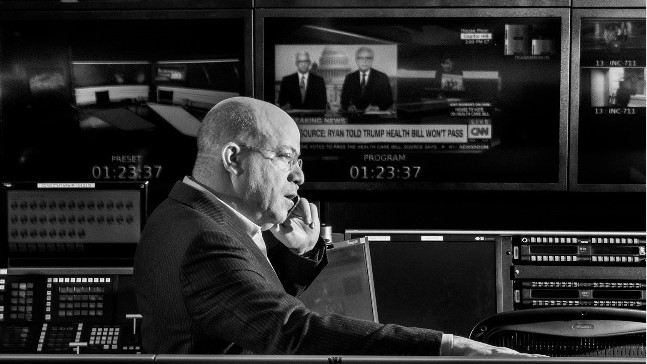 Zucker prodded a producer to pass along a question to Tapper through his earpiece: ''Have you guys ever made any mistakes?''

Tapper obliged, with a slight rephrase: ''Have you or President Trump ever said anything incorrect?''

Feist, meanwhile, was staring at his phone, looking agitated. He was receiving unhappy texts from a CNN producer at the White House.

''The White House wants her to stop,'' he said.

CNN's communications director, Lauren Pratapas, who happened to be in the control room, had an idea. She fed it to Zucker, who instantly repeated it to the producer: ''Does she consider us fake news?''

The show is famous for blowing through commercial breaks and turning normal-length interviews into epic exchanges. In the early days of the Trump candidacy, for instance, Zucker himself approved zipping through breaks to keep Trump engaged in a then-fascinating dialogue with Cuomo (the president’s real-time mental meanderings are no longer fascinating). A recent barn-burner between Cuomo and White House aide Sebastian Gorka chewed up 18 minutes. And Camerota’s interview with [Ben] Carson clocked in at nearly 30 minutes.

If New Day ever tried Cuomo screaming his way into a "barn-burner" with a prominent Democrat, that might demonstrate they are nonpartisan centrists. But you won't really thrill Saturday Night Live or other liberal Internet meme-makers by doing that. Their branding now is all about being anti-Trump. Pretending badly to be "nonpartisan" is trying to have your TV cake and eat it, too.