HuffPost Spikes Article Demanding Execution of Trump and His Collaborators 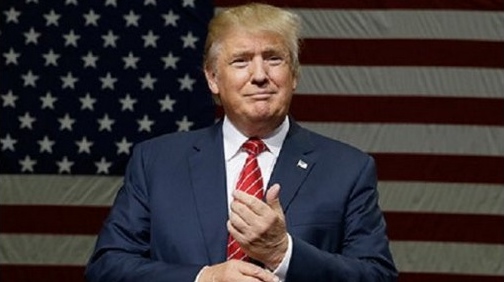 The Huffington Post -- home of some notably hateful rants, like the ex-Washington Post writer who said unlike George W. Bush, "You could argue that even the world’s worst fascist dictators at least meant well" -- has a line contributors can cross. On Sunday night, it was the notion of executing President Trump for treason...and a cast of accessories including Steve Bannon, Kellyanne Fitzpatrick, the Vice President, the Senate Majority Leader, and the Speaker of the House!

The unhinged HuffPost contributor was Jason Fuller, who proclaims he opposes "extremism" in politics: "I live in a small American town and work a low-wage job. I have seen the best and worst in society and in America and am constantly speaking out to try and bring about change. Many of my tweets and blogs are critical of what I see as erosions of civil liberties and freedom, as well as bullying and extremism." Now it only says "This post from The Huffington Post Contributor Platform is no longer available on our site," but his screed was cached here:

Impeachment and removal from office are only the first steps; for America to be redeemed, Donald Trump must be prosecuted for treason and — if convicted in a court of law — executed.

There is very little doubt left that Trump and his team colluded with members of the Russian government to try and rig the election in his favor, even if the Russians did not outright hack the voting process itself; while we may not yet have 100% incontrovertible proof of their collusion, the administration’s attempts to hide previous contacts with the Russians, their willingness to blatantly lie about their communications, and the contents of Trump’s meetings with former FBI director Comey are all incriminating on their own.

That Trump fails to recognize how much he is assisting ISIS with his rhetoric — or simply does not care — is a subject for debate, but it is a fact which he cannot dispute. By choosing to ignore this fact, he is aiding the greatest foreign adversary in the modern world and therefore committing another act of treason. [Italics his.]

Then Fuller gets to the execution of the accessories:

This same argument also applies to top-ranking White House and Republican aides, including — but likely not limited to — Steve Bannon, Kellyanne Conway, Mitch McConnell, Paul Ryan, and Vice President Pence. While they may not be participating quite as directly as Trump himself, the fact that they support his agenda and are helping to protect him means that they are accessories and are thus also committing acts of treason. All must face justice.

Much has been made of the possibility of impeaching Trump, but this will not happen as long as Republicans maintain control of Congress. However, Trump’s impeachment and removal from office are no longer enough....

Draining the swamp means not only ejecting Trump from the presidency, but also bringing himself and everyone assisting in his agenda up on charges of treason. They must be convicted (there is little room to doubt their guilt). And then — upon receiving guilty verdicts — they must all be executed under the law. Anything less than capital punishment — or at least life imprisonment without parole in a maximum security detention facility — would send yet another message to the world that America has lost its moral compass. [Bold emphasis is his.]

The real question at this point: is HuffPost going to keep publishing this wacko?

Fuller's piece is still posted at Medium, and he tweeted it out before it was taken down by HuffPost: 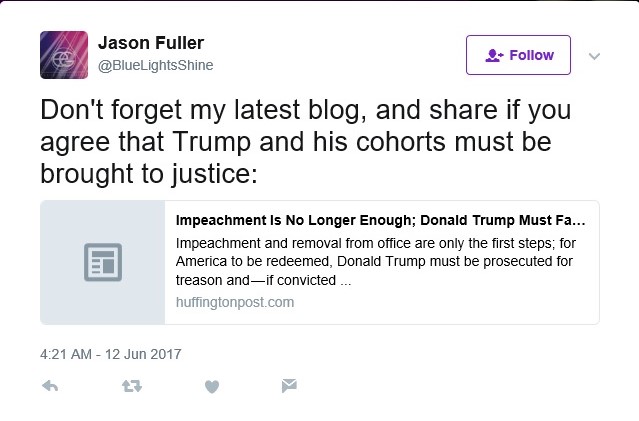