Friday's Washington Post published a blatant agitprop piece for Planned Parenthood on page A-2. The headline was "This teen is the new face of Planned Parenthood," and "social change" reporter Sondhya Somashekhar promoted 17-year-old Deja Foxx of Tucson. She came to Washington for the national publicity -- she's already been promoted by Don Lemon on CNN -- and visits to Arizona Democrats who clearly favor the abortion giant.

The Post promoted Foxx, articulate teenaged woman of color, fighting at a town meeting with Sen. Jeff Flake, accusing him of white privilege:

“I’m a young woman, and you’re a middle-aged man,” Foxx said in the video. “I’m a person of color, and you’re white. I come from a background of poverty, and I didn’t always have parents to guide me through life. You come from privilege.”

Flake smiled as he answered, noting he grew up in the middle of 11 kids, and paid for college all on his own. "Privilege comes in many forms," she shoots back. He speaks of the American Dream, and she naturally insisted Planned Parenthood giving her free contraception represents the American Dream.

At least the Post gave this badly disguised publicity vehicle a small dose of balance from Jeanne Mancini, president of the March for Life, who was able to reply: “Getting free birth control from Planned Parenthood … is not the means for her to achieve the American Dream,” Mancini said. “That’s a really reductive view of the American Dream.”

Liberal reporters never suggest that maybe Planned Parenthood makes enough money off abortions that it could offer free or low-cost contraceptives without the federal subsidies.

But check out how Somashekhar began this piece on the teenaged abortion-mill advocate, illustrated by a photo of Foxx posed like a confident statue in front of the Capitol: 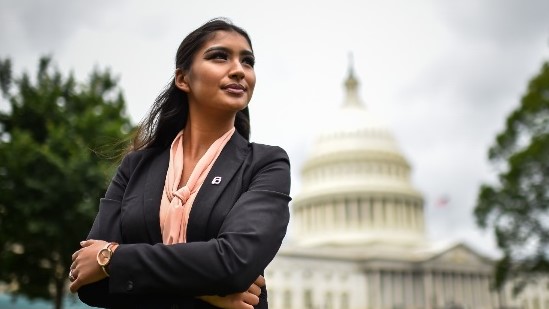 Deja Foxx went to Planned Parenthood just once — but it was a transformative experience.

She was 15, sexually active for a year already, and constantly worried that her dreams would be derailed.

Growing up in a gritty part of Tucson, she saw firsthand what pregnancy could do to a young woman’s aspirations.

Attending a magnet school in an affluent part of town showed her another possible future.

“Watching those kids grow up, I wanted all the chances everyone else had,” said Foxx, now 17.

Still a year shy of the legal driving age, she borrowed her boyfriend’s old Mitsubishi Eclipse and drove 45 minutes to the Margaret Sanger Health Center. A kind nurse showed her a booklet of birth control options.

She left with a seven-month supply — and a heart full of relief.

Today, Foxx is a fresh young face in the effort to block government cuts to Planned Parenthood, a 100-year-old women’s health organization that is under attack for its role as the nation’s largest abortion provider.

Readers couldn't tell the difference between this "objective newspaper" copy and a paid advertisement.