The Washington Post put Democratic scandal – former Rep. Anthony Weiner pleading guilty to “sexting” a 15-year-old girl -- over on page A-3 on Saturday. On the front was a story to make Democrats feel righteous. The headline was “New Orleans removes Confederacy monuments.” Post reporter Janell Ross wasn’t trying to hide her happiness:

NEW ORLEANS — They are all gone now. On Friday, the statue of Confederate Gen. Robert E. Lee became the last of New Orleans’s four contested monuments to go, an end to more than 130 years of publicly honoring a man who embodied Southern pride and racial oppression.

Still on the front page, Ross turned to New Orleans Mayor Mitch Landrieu and his “rousing speech” for the occasion:

“They are not just innocent remembrances of a benign history. These monuments celebrate a fictional, sanitized Confederacy ignoring the death, ignoring the enslavement, ignoring the terror that it actually stood for,” Landrieu said, adding that Lee and the Confederate army fought against the United States. “They may have been warriors, but in this cause they were not patriots.”

A few paragraphs later, Ross brought on a professor to speak on her own behalf, Carol Anderson of Emory University author of the 2016 book White Rage. Anderson announced a conspiracy theory:  "Beneath all the talk [of keeping Confederate monuments and statues] is a longing for an America that is not only predominantly white, but where the resources of a very, very rich nation are funneled about exclusively toward whites."

Black Americans can obviously look at the history of slavery and Jim Crow and argue the Confederate generals represent oppressors. But what about other oppressors? A friend of mine named Wayne from Texas pointed out another monument The Washington Post could campaign against if they were all about cheering on the removal of men who embody oppression. Seattle has a large bronze statue honoring Vladimir Lenin, the leader of the mass-murdering Soviet regime installed in the Russian revolution of 1917. How does the Post strike a pose on that?

Don’t be surprised. They think it’s quirky, loaded with ironic detachment. This monument has been mentioned in the Post only in Travel section articles over the last 20 years. Here are the three that came up in a Nexis database search: 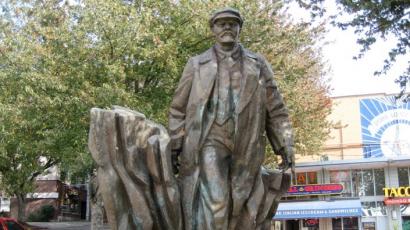 -- January 17, 1999: Freelancer Frank Kuznik wrote: "The spine of the neighborhood is Fremont Avenue, loaded with vintage clothing and antiques shops, bookstores, bars and restaurants. Fremont Place, the main cross street, leads to less-traveled shops with mischievous names like Esoterica and Postquarium, and an imposing bronze of Vladimir Lenin, liberated from Slovakia in 1989. Anywhere else in the continental United States, this seven-ton monster might look like a dirty Commie trick. Here it's just another wacky joke, standing guard outside the hemp products store."

-- October 7, 2012, Florida State writing professor Diane Roberts: "Located between the University District and the old Scandinavian fishing village of Ballard, Fremont is one of the holy sites of hipsterdom. Annexed to Seattle in 1891, it has an unofficial motto that's said to be "De Libertas Quirkas," (almost) Latin for "Freedom to be Peculiar." That might explain the statue of Lenin at the corner of Evanston Avenue and North 36th. Vladimir Ilyich had been consigned to a dump during the Velvet Revolution in what was then Czechoslovakia, but a Fremonter rescued him and brought him home."

--  November 22, 2014: Post political reporter Reid Wilson: "Seattle is a strange city. There's a giant troll under one of the city's main bridges, a giant statue of Vladimir Lenin on a random street corner and an annual Spam carving contest to take in. The neighborhood with the Lenin statue, Fremont, encourages visitors to set their watches 5 minutes ahead, because Fremont is the self-proclaimed center of the universe."

It's beyond quirky that a self-proclaimed "frolicsome fiefdom" of "independent minds" can be represented by an icon of totalitarianism. The Fremont neighborhood chamber of commerce boasts a view different than the Washington Post line on Robert E. Lee:

Lenin in Fremont: Right or Wrong?

The presence of this sculpture has evoked a wide range of responses. If art is supposed to make us feel, not just feel good, then this sculpture is a successful work of art. The challenge is to understand that this piece means different things to different people and to learn to listen to each other and respect different opinions. From an artists standpoint, all points of view are valid and important.

This sculpture is placed here in the Artist’s Republic of Fremont, as a symbol of an artistic spirit that outlasts regimes and ideologies, and as tangible proof that art does outlive politics.

So perhaps the Robert E. Lee statue from New Orleans can be moved to Seattle? Whatever happens, the leftists at The Washington Post treat Lenin as quirky and General Lee as a monster.