President Trump's first budget proposed to end funding for the Corporation for Public Broadcasting, something we at the MRC have advocated throughout our history. It's not fair that conservative taxpayers should have to subsidize propaganda programs that insult their political philosophy and assault their favorite politicians. 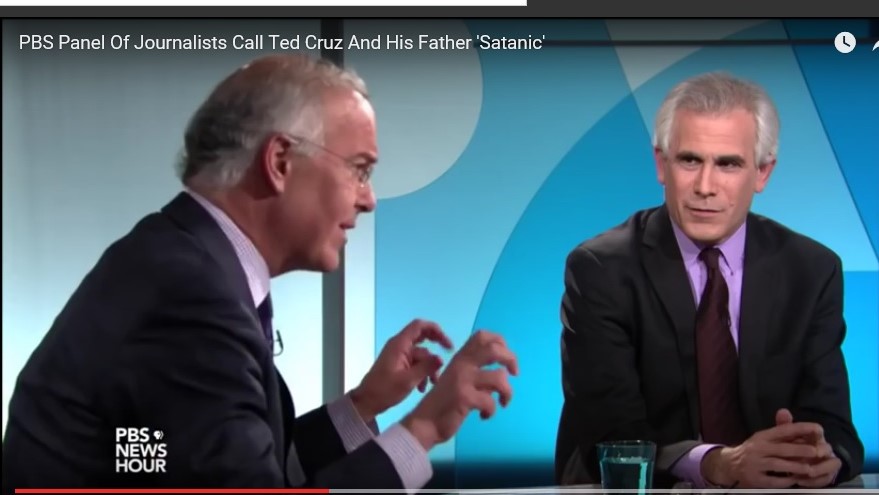 PBS president Paula Kerger issued a statement insisting that politicians in both parties support them. Traditionally, it's a little hard for Republican politicians to support cutting funding from NPR or PBS stations in their district that report on their activities and their campaigns. We'll see if they have more fortitude in the Trump era. Kerger also claimed:

The cost of public broadcasting is small, only $1.35 per citizen per year, and the benefits are tangible: increasing school readiness for kids 2-8, support for teachers and homeschoolers, lifelong learning, public safety communications and civil discourse.”

That last claim is the real myth. PBS and NPR have unloaded some seriously hostile assaults over the years. Last year, we noted PBS NewsHour pundit David Brooks -- the "Republican" half of the political experts -- argued Ted Cruz’s rhetoric carried “dark and satanic tones...we’re going to stomp on this person, we’re going to crush that person, we’re going to destroy that person. It is an ugly world in Ted Cruz’s world.” His fellow pundit Mark Shields sneered in 2011 that a mining accident that killed 12 miners in West Virginia represented "Tom DeLay's America in action."

In 2011, we issued a Special Report titled Counting the Reasons to Defund: The 20 Most Memorable Leftist Excesses of Public Broadcasting. See how "civil discourse" was missing in our top-ten list:

1. PBS host Tavis Smiley insists America has a terrible Christian terrorist problem. In 2010, he told an author that Christians blow up people “every day” in the United States.

2. The narrator of a PBS series on Africa praises Moammar Qaddafi. In his 1986 series The Africans, Muslim professor/activist Ali Mazrui insisted Qaddafi offered “supreme ideals” to make Africans and Arabs “masters of their own destinies” against the West.

4. PBS regular Julianne Malveaux hopes Clarence Thomas dies young of heart disease. On the talk show To the Contrary in 1994, panelist Malveaux proclaimed, “I hope his wife feeds him lots of eggs and butter and he dies early like many black men do, of heart disease.”

5. NPR’s foreign editor vows to “smoke out” American troop locations in Afghanistan. Weeks after 9/11, Loren Jenkins told the Chicago Tribune he had no desire to aid a lying Pentagon. He represented “history.”

6. Andrei Codrescu wishes evangelical Christians would disappear. Days before Christmas in 1995, the NPR commentator read a pamphlet on the Rapture and said “The evaporation of four million who believe this crap would leave the world an instantly better place.”

7. Longtime PBS host Bill Moyers proclaims GOP officials wearing flag pins after 9/11 remind him of communist China. On his weekly show Now in 2003, Moyers ranted, “When I see flags sprouting on official lapels, I think of the time in China when I saw Mao's Little Red Book.”

8. Bill Moyers insists the Nicaraguan dictators were better Christians than their American critics. In a 1987 program, Moyers proclaimed that in a child’s painting, the “black birds” represented America, and the “white birds” were the Sandinistas who revered freedom, George Washington, and Jesus Christ.

PBS and NPR present themselves as calm islands of civility. But it's not difficult to find the overwhelming liberalism in these studios resulting in remarkable incivility to Republicans who are paying a chunk of their bills.