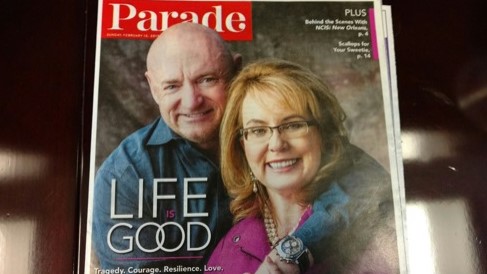 The Sunday newspaper supplement Parade Magazine has been an absolutely Trump-free zone since the election. The Obamas repeatedly came for softball interviews and cover stories, for example as they promoted a “working families summit” in 2014. One can guess the Trumps aren’t granting access, but the magazine staff is almost pretending they don’t exist.

On Sunday, Parade spotlighted a different liberal couple on the cover with the words “LIFE IS GOOD: Tragedy. Courage. Resilience. Love. The story of MARK KELLY & GABBY GIFFORDS.” Kathleen McCleary mostly wrote about the couple’s struggles since then-Congresswoman Giffords was shot in a Safeway parking lot in Tucson in 2011, but there is a bit about their liberal advocacy group for limiting gun rights.

WORK WITH A PURPOSE Giffords and Kelly are believers in the Second Amendment right to carry arms, but in 2013, shortly after the Sandy Hook shooting, they founded Americans for Responsible Solutions. The nonprofit advocacy organizatoins works to reduce gun violence...”This is our way of serving our country,” Kelly says. “Neither of us works for the federal government anymore. We think public service is important, and this is our way to give back.”

Two years ago, Parade's Dotson Rader spun a marvelous tale about how devoutly Catholic the Kennedys were, and how sweet they were to JFK's lobotomized sibling Rosemary.

In 2012, former ABC reporter Lynn Sherr interviewed both the Obamas and the Romneys, but guess who drew all the hardballs? Obama kept claiming he was a centrist who Republicans liked a lot.