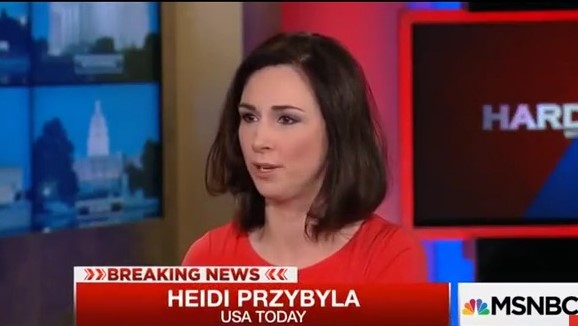 USA Today senior political reporter Heidi Przybyla is a willing publicist for feminist Democrat groups.  On page 3 of Monday’s paper came an article headlined “Women Across the USA Marshal Political Forces: EMILY’s List is on a mission to groom female candidates.” Above the headline is a picture from the “Women’s March on Washington,” with a woman holding a sign that reads “Women Are the Wall, and Trump Will Pay.”

This visual encourages the idea that women as a group are all anti-Trump, although exit polls showed 42 percent of females voted for Trump. Pryzbyla’s entire 1,206-word story read like the liberal group’s commercials or annual report, promoting the efforts of EMILY’s List to train pro-abortion Democratic women to run for office. Sorry, she "reported" the group "elevates pro-choice Democratic women."

Przybyla's title is Senior Political Reporter, but her title could more accurately be described as Liberal Momentum Booster. She wrote a similar cheerleading article (629 words) on February 2, which began: “Organizers of the Women’s March on Washington are forming local chapters to organize the millions of women and men who protested the day after President Trump’s inauguration. On Thursday, they announced a series of local community gatherings, or Huddles, across the country between Feb. 2 to 12, from Key West, Fla., to Tucson, Ariz., and Idaho and Ohio. There will also be global chapters, including in Barcelona and Amsterdam.”

So how did USA Today report on the March for Life on January 27? The March occurred on a Friday, and there is no Saturday edition. On Friday morning, the paper managed a 304-word preview story about Vice President Pence speaking. But also on that day came – make a shocked face --  a big story by Przybyla on the back page of the front section (8A) headlined “WAVES SWELL FROM WOMEN'S MARCH: Anti-Trump activists hope to concentrate energy in one direction.” Yes. To the Left.  This was yet another story (776 words) pushing the narrative of an “urgent” mass movement of progressives that will curtail (if not overrule) Trump.

There are already signs the historic Women's March on Washington was the start of a growing grass-roots resistance to President Trump’s agenda.

The night after the biggest national demonstration in U.S. history, a coalition of activists led by MoveOn.org held an “emergency” conference call to discuss next steps — it drew an estimated 60,000 participants.

Then the USA Today reporter touted small protests outside the offices of Sen. Pat Toomey and Sen. Cory Gardner -- never mentioning that the abortion advocates fought hard against both of these Republican Senators and lost in the last two election cycles. Facts like that aren't helpful, so they're left out.