New York Times music critic Jon Caramanica transparently sounded like an angry Democrat in reviewing the concert titled the "Making America Great Again! Welcome Celebration." Their headline was "Concert for Trump Misses an Opportunity." He began by complaining that the Trump organizers didn't even ask rapper Kanye West to appear, despite his kind words for Trump. Utterly forgotten: how Republicans remember Kanye West's idiotic outburst on an NBC telethon for Hurricane Katrina aid about George Bush not caring about black people.

Instead, Caramanica uncorked a classic leftist attack on red, white, and blue "jingoism," and patriotism as vaudeville:

What was presented as “typically and traditionally American,” however, veered between jingoism and vaudevillian fluff and largely ignored the contribution of African-Americans to popular music (which is to say, almost all of popular music).

Instead it focused heavily on country and rock by white Southerners, including the country superstar Toby Keith, who has been the nation’s loudest musical cheerleader for a decade and a half; the Mississippi hard-rock band 3 Doors Down, which was a favorite in the early-to-mid 2000s; and the Frontmen of Country, an amalgam of lite-country singers made famous in other bands.

Largely ignored? Down in paragraph 11, Caramanica had to admit a legendary soul singer, well he left out any positive adjectives: 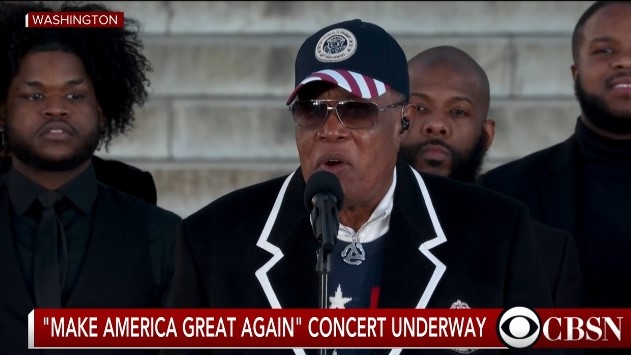 This concert ended up being as notable for who did not show up as for who did. The only featured nonwhite performers were Sam Moore (of the 1960s soul duo Sam & Dave), who sang a restrained “America the Beautiful” backed by an all-black choir, and D.J. Ravidrums, who delivered his dim, caffeinated percussive interstitials from inside a spherical theme-park drum kit. But both of those acts got just a couple of minutes. The United States Army Old Guard Fife and Drum Corps got much more time for their two-centuries-old songs.

Let's guess that 200-year-old sounds from America's beginnings are the "vaudevillian fluff." Or perhaps it was Toby Keith that brought the vaudeville? Caramanica sounded a little like ABC News star Peter Jennings in 2002, who helped cut Keith from a Fourth of July special out of distaste:

Mr. Keith’s career soared after 9/11, when his music took an aggressive turn. At this show, he played the pugnacious and proud “Courtesy of the Red, White and Blue (The Angry American),” and also “American Soldier,” a meditative embrace of patriotic dedication. He also played “Beer for My Horses,” with its not-very-ambivalent endorsement of old-time vigilante justice: “Take all the rope in Texas, find a tall oak tree / Round up all them bad boys, hang them high in the street / For all the people to see.”

If Caramanica meant to insist Keith wasn't a star before 9/11, that would be untrue. He had four gold records in the mid-1990s and his 1993 single, “Should’ve Been a Cowboy” — became the most-played country song of the 1990s.

Caramanica also let his disdain get ahead of the facts in claiming "Lee Greenwood joined them for “God Bless the U.S.A.,” a dour march of national pride." Dour? Did he ever listen to the song's lyrics???

In total, the concert’s message was that America is a defined geographical and ideological space, with borders worth defending, even at the price of excluding those who could make the place immeasurably more fun...

In 2009, Mr. Obama held a pre-inauguration concert here, “We Are One: The Obama Inaugural Celebration at the Lincoln Memorial.” It included athletes, actors and musicians from across genres — Mary J. Blige singing Bill Withers’s “Lean on Me,” Pete Seeger and Bruce Springsteen singing “This Land Is Your Land,” a song of acceptance and respect for the nation. It was a show of cosmopolitanism and inclusion that portrayed America not as a fixed idea, but as an ever-changing sum.

Back in 2009, Times music critic Jon Pareles was a much happier camper:

Gospel and soul set the tone on Sunday afternoon for ''We Are One: The Obama Inaugural Celebration at the Lincoln Memorial.'' The African-American music that finds the promise of hope amid tribulation was just about everybody's music at an all-star event designed to be somberly uplifting and devout, as well as celebratory without triumphalism...

It was, by design, a concert full of messages about an inclusive America. Its penultimate song had Mr. Seeger, who survived being blacklisted during the McCarthy era, leading a singalong on a full-length version of Woody Guthrie's ''This Land Is Your Land,'' with one of his admirers, Mr. Springsteen, by his side.

Pareles reported the Obama concert was broadcast live by HBO and National Public Radio, who obviously were much happier back then, as well.