The liberal comic strip Doonesbury is only current on Sundays these days. Every other day is reruns from the past, “Classic Doonesbury,” like there is such a thing. On the last Sunday before Christmas, cartoonist Garry Trudeau is having fun as liberals typically do: he imagines Donald Trump hating all reporters except the submissive fanboy from Breitbart News....and the Breitbart guy is dressed in full Ku Klux Klan regalia: 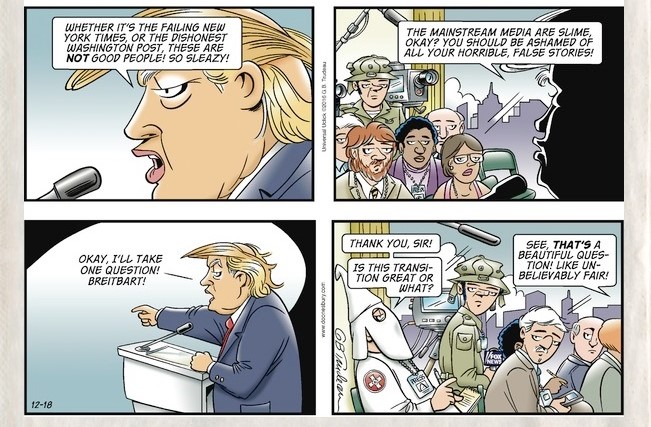 Trudeau doesn’t make fun of Hillary Clinton for hating the press when it challenges her. He doesn’t mock Obama for loathing Fox News for challenging him, or notice that eight years ago, this was the basic liberal media line: “Excellent transition, sir! Team of geniuses, sir!”

But then, Trudeau’s wife Jane Pauley was one of a conga line of Clinton-coddlers on NBC back in the day, as we noted in our book Whitewash. In 1992, she asked Hillary Clinton on national television “When you hear yourself held up, as you were at the Republican convention, some people have used the word ‘demonized,’ does it make you hurt? Or make you mad? “ And: “What was the grossest distortion of your record?”

Pauley applied for the Suckup Hall of Fame for this question about the Pain In Your Marriage issue: “Before Governor Clinton declared for the presidency, you prepared Chelsea [then 12]. Was Chelsea at all prepared for bad things being said about Mommy?”

In the fall of 1998, Pauley appeared stupid enough to forward the fake news that Hillary believed every word Bill said (sure, she did!) about not having sex with Miss Lewinsky for half a year: “She had believed his denials and indeed last January, as she told the Today show’s Matt Lauer, he seemed to take for granted that she wouldn’t believe everything she read in the papers....Then silence. As the investigation turned up the heat on friends and colleagues, even as he testifies under oath before a grand jury, she says nothing. Balancing a threat to her marriage against an assault on the presidency, she does what she does best. She goes to work.”

Trudeau is unloading the obvious leftist smear after Steve Bannon told a Mother Jones writer that Breitbart is  “The platform for the alt-right.” After the election, when he left Breitbart to be Trump's senior counselor, Bannon gave an interview to The Wall Street Journal insisting that his vision of the alt-right doesn’t have any racists in it:

But he says Breitbart is also a platform for “libertarians,” Zionists, “the conservative gay community,” “proponents of restrictions on gay marriage,” “economic nationalism” and “populism” and “the anti-establishment.” In other words, the site hosts many views. “We provide an outlet for 10 or 12 or 15 lines of thought—we set it up that way” and the alt-right is “a tiny part of that.” Yes, he concedes, the alt-right has “some racial and anti-Semitic overtones.” He makes clear he has zero tolerance for such views.