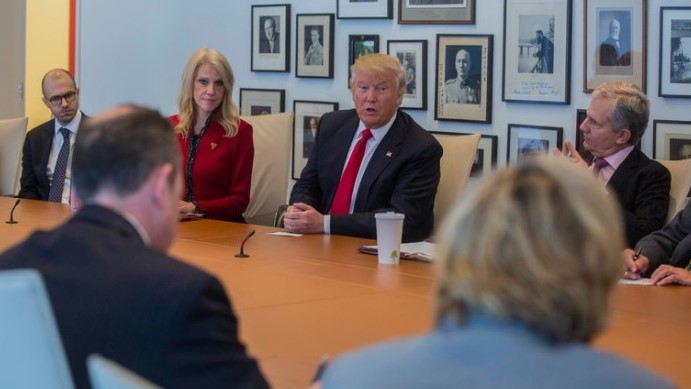 The New York Times not only interviewed Donald Trump on Tuesday, they came out of the interview and made a 45-minute podcast about it. In that, reporters Maggie Haberman and Michael Barbaro demonstrated their liberal distance from the president-elect, comparing his demeanor at the start of the interview to an "unhappy kid." Haberman also suggested he seemed like a child in dismissing two Republican Senators who lost after walking away from supporting him for president.

MAGGIE HABERMAN: He started out a little bit defensive, I thought, his arms folded as he was sitting down.

BARBARO: The metaphor that came to mind was of an unhappy kid –

BARBARO: – Just sort of waiting for something really bad to happen.

HABERMAN: Yeah, it was like getting ready to endure punishment. Instead, he doled out the punishment.

A few minutes later, they explored Trump's dismissive contents about losing Republicans Senators Joe Heck of Nevada and Kelly Ayotte of New Hampshire. He declined to support them or offer them jobs now that he's president-elect.

HABERMAN  To your point about a child, almost putting his thumb on his nose and saying “naah-nah-naah-nah” to two [Republican] Senators who lost.

This is why Chuck Woolery had a harsh reaction on Twitter, which caused us to look into it: 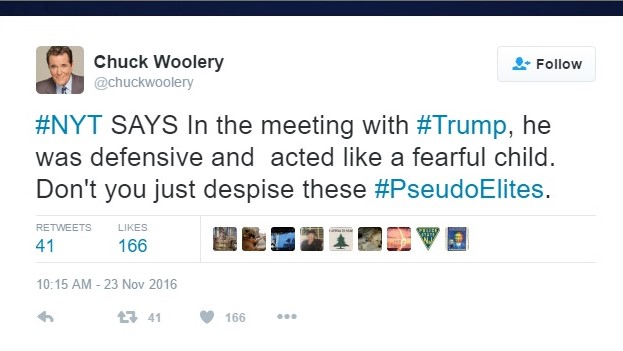 Columnist Ross Douthat offered a little bit of balance to the dominant Times mindset that Trump has no depth on any subject, as Barbaro cited Trump's remarks about infrastructure being based on something a truck-company boss said to him about the state of America's highways:

BARBARO: That makes me wonder: Do you think he showed any depth on any subject in that meeting at all? (Emphasis mine.)

ROSS DOUTHAT: In fairness to Trump, that’s true of a lot of presidential candidates. I mean you could listen to Mitt Romney, as you did more than I did on the campaign trail in 2012, and he would talk about people he knows in business who have said things to him about the state of the American economy.

Then late in the podcast there came a moment where Haberman lost her composure and laughed heartily at the picture of President Trump and his son-in-law Jared Kushner finding peace in the MIddle East, like they could never ascend to heights of, say, Jimmy Carter or Bill Clinton:

BARBARO: I want to touch on the Middle East, because there was a moment we all had with Donald Trump just three hours ago, where you suddenly had an image of Arafat and Rabin and...Jared Kushner? [Haberman laughs uproariously.] And the idea being that there might be a Donald Trump vision of himself as a transformative figure able to make peace in the Middle East. I have to tell you I did not expect him to say that.

Again, Douthat took exception, saying Trump made noises about brokering a peace deal with Israel and the Palestinians in a debate during the primaries, and conservatives insisted Trump was too docile about the Palestinians. Douthat added that Kushner is his personal Middle East aide, and wrote his campaign speech to the AIPAC convention.

Douthat put quite a bow on the podcast at the end when asked for an overall impression. He said if you thought Trump was a nightmare, "a sort of proto-Hitler building concentration camps," the meeting might "offer some relief." Is that what the columnist thinks his Times colleagues were imagining?