Online the headline was “The abortion rights movement is bolder than it’s been in years. That’s Cecile Richards’s plan.” By “bold,” they could mean shameless, starting with the omissions in Caitlin Gibson’s puff piece. As Micaiah Bilger noticed at LifeNews.com:

It does not mention that her salary alone is $590,982 every year, or that Planned Parenthood is responsible for aborting about 320,000 innocent unborn babies every year – more than any other group in the U.S. Nor does it mention that one of Richards’ top priorities, repealing the Hyde Amendment and forcing taxpayers to fund abortions, would be a huge financial benefit to Planned Parenthood.

Gibson is out to underline the Post subheadline: "Cecile Richards's unapologetic leadership emboldens the organization that's been under siege by antiabortion activists." The boldness comes in pushing for taxpayer-funded abortions and setting aside concepts like making abortion "safe, legal, and rare." After all, who wants rare abortions when they're crucial to your business? 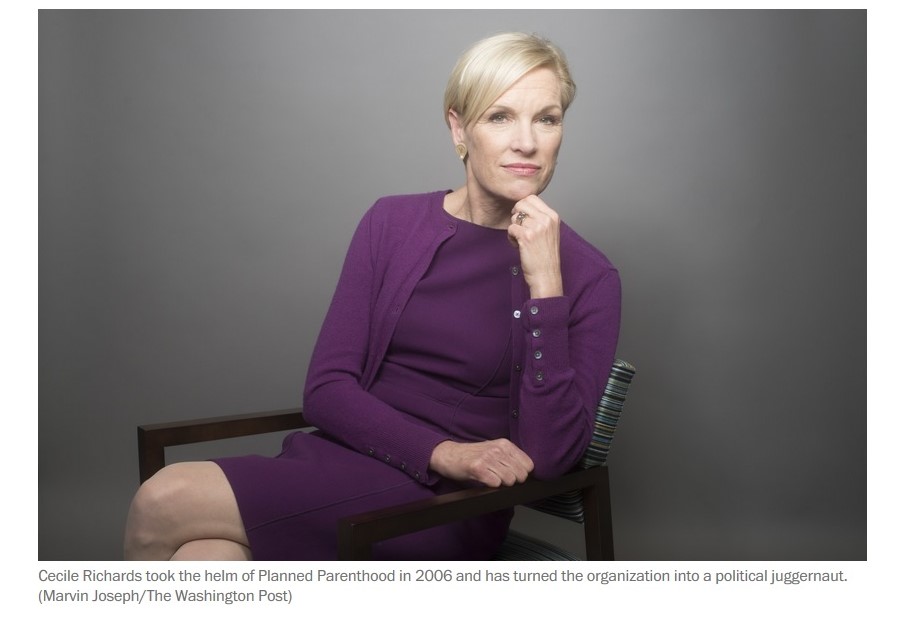 She is, as always, immaculately put together, her tall frame draped in a merlot-colored sheath and matching cardigan, gold earrings twinkling beneath her short, white-blond hair. Her alto voice conveys the subtlest hint of a Texas twang, and more than a hint of sarcasm.

She leans forward slightly and raises her voice: “Can you imagine if these kinds of restrictions were put on any other kind of health care in America?”

In person, the 59-year-old Richards exudes both a warm authenticity and a subtle impenetrability; there’s the sense that she means everything she says, but she isn’t saying everything. Her public persona is almost preternaturally controlled; like the savviest politicians, she’s supremely polished, perpetually on-message and surrounded by a highly protective media operation that carefully controls reporters’ access and circles the wagons when uncomfortable situations arise.

There are two serious head-shakers in this Gibson article. The first is that Richards has successfully build "the largest kick-butt political organization," ignoring entirely how the abortion giant's bid to elect Democratic Senators in North Carolina and Colorado two years ago utterly failed.

The second one is to continue the whitewashing of Planned Parenthood selling the body parts of aborted babies, so obviously exposed by videos from the Center for Medical Progress. Gibson barely notes the entire controversy, using the usual fact-mangling boilerplate that the CMP videos "purport to show" Planned Parenthood officials negotiating prices for organs. It's like writing the Post "purported to show" Watergate as a real scandal.

Ignoring questions about this sleazy business practice was just another day of "bold" messaging, according to Gibson:

Moments before Richards stepped onto the House floor in September to defend Planned Parenthood at the undercover video hearing, McGovern sent her a text message of support: May the rage of women through the centuries center you as you go into this. [Italics in the original.]

The sentiment inspired Richards, although she may not have needed the extra “You go, girl.” She navigated the hearing with her signature composure, frustrating some congressmen with her strict adherence to the Planned Parenthood script.

There it is, the usual liberal arrogance that baby-mangling feminists are the real, authentic women, and any woman who opposes them isn’t really female. Richards established early that abortion was something only opposed by men who dismiss women:

“There’s this thought that women are just too scattered, we’re too impulsive, we are too hormonal, we can’t make good decisions for ourselves,” Richards says, sitting in a sterile, glass-walled conference room at Planned Parenthood’s headquarters. She’s talking about what she thinks lies at the root of the bitter debate over abortion.

Gibson and the Post should check out a CMP video, and look into a dish full of dead-baby limbs and think maybe there's something "bolder" to oppose here.