Our number-crunchers found the networks gave Trump’s “Second Amendment” crack about stopping Hillary-nominated judges drew five times as much air time as Hillary’s embarrassment when the father of mass-murdering Orlando terrorist Omar Mateen showed up behind her on TV at a Florida rally.

Guess what? The nation’s top newspapers were even worse in demonstrating a double standard on these two bad-news moments from the campaign trail in their Wednesday editions. 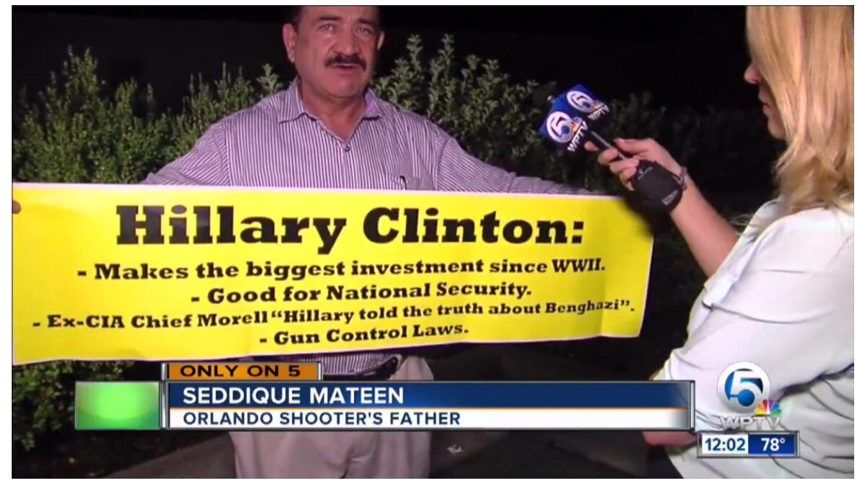 The New York Times printed a 1,287-word article at the top right of the front page headlined (all caps) “TRUMP SUGGESTS GUN OWNERS ACT AGAINST CLINTON: ALARM AT HIS REMARK.” Just to the left of that on top of the front page was an article headlined “G.O.P. Women Are Retreating From Nominee.” The Times also wrote a scathing staff editorial leading that page with the headline “Further Into the Muck With Mr. Trump.”

But the Times offered absolutely nothing in the print edition on Mr. Mateen, dismissing the story in a 440-word feature online by Matt Flegenheimer with the headline “Clinton Campaign Plays Down Appearance at Rally by Orlando Gunman’s Father."

The Washington Post wasn’t much better. Like the Times, it plopped the Trump story on top right of Page One, a 1,409-word story headlined “Trump decried for gun remark: Critics see his comments on 2nd Amendment as a threat against Clinton.” Also like the Times, its lead staff editorial piled on, with the headline “An ugly call to ‘Second Amendment people’: Mr. Trump seems to offer a veiled threat in comments about Mrs. Clinton and gun rights.”

So where was the story on Papa Mateen in the Post? There wasn’t a story. On the back page came an article by Anne Gearan headlined “Clinton prods GOP congressional leaders to take emergency action on Zika.” In the sixth paragraph of the Zika article, the Post offered a measly two sentences adding up to 54 words:

Separately, the Clinton campaign said it was unaware that Seddique Mateen, the father of the suspect in the June mass shooting at an Orlando nightclub, secured a prime seat at a Clinton rally on Monday in Kissimmee, near Orlando. Mateen told Florida television station WPTV that he had been "invited by the Democratic Party."

The Trump story carried over to the back page, where the Post reprinted the 41-word Trump 'Second Amendment people' quote in headline-size type, taking up about 24 column inches of space.

The Post’s free tabloid Express also showed the double standard. It published a 16-paragraph version of the regular front-page article on Trump, and only ran a 20-word “Verbatim” quote from Papa Mateen at the bottom of the same page (13). The quote was “Clinton is good for the United States, versus Donald Trump...I was invited by the Democratic Party. I’m a member.” Aligned next to the Trump story on page 13 was a five-paragraph story on how Hillary is spending more than $13 million in political ads on the Olympics broadcasts while Trump airs nothing.

There was also an article of some depth on the Mateen embarrassment...but not by a news reporter. It was a column on the editorial page by conservative "Instapundit" blogger/professor Glenn Reynolds.

PS: My longtime colleague Rich Noyes thought this example should be added:

The Wall Street Journal posted a front-page article Wednesday headlined "New Flap for Trump Over Gun Comments" that went on for 29 paragraphs on how "Trump touched off another firestorm Tuesday." The Wednesday paper had no article on Seddique Mateen. Late on Wednesday night, the Journal posted an article on Trump pointing out the Mateen problem, then added the liberal retort on former Congressman Mark Foley in Trump's TV picture on Wednesday.