On NPR, Sam and Cokie Recall the Sixties, When the GOP 'Became Much More Racist'

The one-time ABC Sunday hosting duo of Sam Donaldson and Cokie Roberts appeared together on Tuesday morning on NPR's Morning Edition to discuss convention history. Roberts is now a senior news analyst at NPR and usually appears weekly on Monday mornings. They began with the 1964 GOP convention, and Donaldson said "I think this was the first convention of the modern Republican hard-right conservatism." Roberts said "Absolutely right," noting "Nelson Rockefeller got booed."

Roberts said after 1964 and the passage of the Civil Rights Act, the Republican Party "became much more racist" and Donaldson joked in his usual way that Lyndon Johnson's fight for desegregation gave the South to the Republicans "forever!" 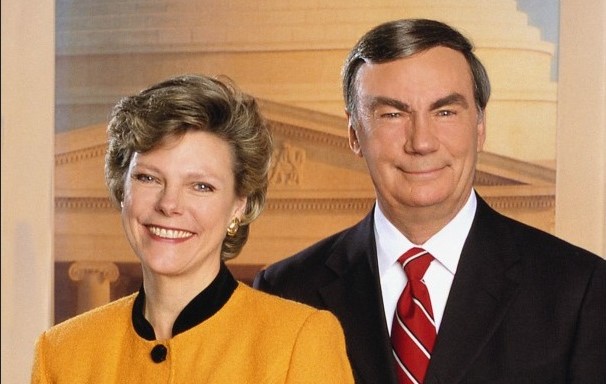 STEVE INSKEEP, anchor: OK. Now we're getting to the essence of this. Cokie Roberts, help us out here. We've mentioned a couple of names. We've mentioned Nelson Rockefeller, Barry Goldwater. Who were they? What was the basic divide in the Republican Party at that moment?

COKIE ROBERTS: It was a traditional divide in the Republican Party. It was hardly the first time that you had a conservative-moderate divide. You had had it in 1952 with Robert Taft and Dwight Eisenhower. But it was a different kind of conservative. And that's what Sam is alluding to, meaning that it is the beginning of the modern Republican conservative movement.

And many people in the Republican Party trace their origins to Barry Goldwater and to his conservatism and say that the fact that he went down in flames in 1964 was not a true defeat for the conservative movement. Now, interestingly, a lot of those same people - the ones who are still alive - are saying that they are not for Donald Trump because they don't see him as a true conservative in the Goldwater tradition.

STEVE INSKEEP: But let's figure out what's relevant to now. Was this a takeover of the party by some new people who hadn't been as involved or as powerful before?

SAM DONALDSON: Well, it wasn't - and yes, exactly right - because Barry Goldwater had written a little treatise called The Conscience Of A Conservative, in which he outlined this very hard position. And a lot of people came to him - people who were upset about the Rockefeller-type of Republicans.

SAM DONALDSON: Just as people today are upset about -- you know, I'm getting left behind by globalization and technology and what have you. [Nobody's upset about a multi-trillion-dollar federal establishment and a massive national debt?]

COKIE ROBERTS: But it was also the beginning of the party moving West and South. The party had been a Northeastern, middle-Western party. And that was a much more moderate party. It was a party that was committed to civil rights. There were more Republican votes percentage-wise for the civil rights bill than Democratic ones in 1964. [She left out that her father, Rep. Hale Boggs, voted No.]

SAM DONALDSON: Well, that's right. Remember that Lyndon Johnson, in signing the Civil Rights Act that did away with de jure segregation, said, I think I've turned the South over to the Republican Party for a generation. Well, he was wrong - not just one generation - forever!

STEVE INSKEEP: Or for many, many years, anyway.

SAM DONALDSON: (Laughter) I mean, all the good Democrats down there suddenly became Republicans. And Barry won six states.

COKIE ROBERTS: Not all.

STEVE INSKEEP: (Laughter) Says the daughter of some famous Democrats from the South.

Hale Boggs (D-Louisiana) disappeared during a plane flight over Alaska in 1972, and was succeeded in the House of Representatives by his wife Lindy Boggs.

Sam and Cokie co-moderated This Week from 1996 to 2002, when ABC handed the hosting duties over to another lifelong Democrat, George Stephanopoulos.