HBO star Bill Maher is unleashing his usual sleazy insults on Twitter during the Republican convention, and the targets this time are Trump's sons Donald Jr. and Eric, that they "look like the date rapist in every after school special ever." 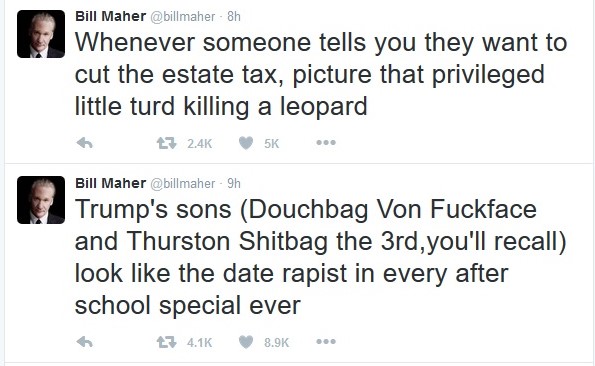 Doesn't this read like restroom graffiti? Maher at least had the the decency to only mock two sons...somehow 10-year-old Barron escaped the tweets.

This is easy work for Maher, who has no wife or children to mock. Maher also couldn't resist mocking daughter Tiffany Trump's speech praising her dad's love and support. But what's with the misspelling? The man who loves mocking ignorant right-wingers can't spell "lying"?

This probably shouldn't be surprising for Maher, whose Twitter hashtag for Donald Trump is "#WhinyLittleBitch". He also tweeted, hey, he'll be bringing this comedy gold to Las Vegas this weekend, so if you're into left-wing vulgarians, what a treat.