The liberal New York Daily News wallowed in anti-Trump comments made by Pittsburgh Steelers offensive tackle Ryan Harris, who won a Super Bowl ring in February with the Denver broncos. Mark Emery wrote: Hey, Donald Trump — one of those Muslim athletes you suggested don't exist is talking about you.Harris, a convert to Islam, put on his freedom swagger and said Trump’s comments on Islam have been “un-American.”

To the original article in the Pittsburgh Post-Gazette, which started by worrying about how Harris would make it through practice during Ramadan:

A convert to Islam, Harris spoke out in December when Republican presidential candidate Donald Trump said he would ban all Muslims entering the country if he is elected. 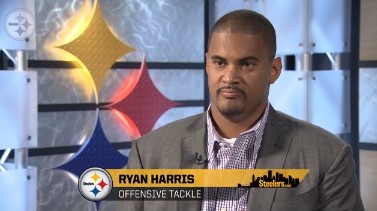 Harris responded again this week to the question of Trump’s stance.

“The right to pursue freedom and liberty in this country and practice your own religion, that’s as American as it gets. If you’re against that, to me and to others, it’s un-American.”

He has experienced little resistance to his Muslim faith from his days at the most famous Catholic university in the country to his years around the NFL in Denver, Philadelphia, Houston, Kansas City and now Pittsburgh.

“It’s been great my entire life. That’s the unfortunate thing, the headlines, you can see some of the negativity, but that’s not been my experience.”

No one asks about the serious tensions between Islam and freedom of religion. Liberal newspapers have tried to slice and dice a 2013 public opinion survey of 39,000 Muslims by the Pew Research Center, which found a range of tolerance in Muslim countries -- but this forms a question for Harris about freedom of religion:

Nevertheless, in six of the 20 countries where there are adequate samples for analysis, at least half of those who favor making Islamic law the official law also support executing apostates.

Taking the life of those who abandon Islam is most widely supported in Egypt (86%) and Jordan (82%). Roughly two-thirds who want sharia to be the law of the land also back this penalty in the Palestinian territories (66%).

Harris offered a version of the same mini-speech in December to Nicki Jhabvala at the Denver Post:

"I think about it the same way I think about ISIS it's just something that's totally unbased that plays on the fear of people," said Harris, the Broncos' offensive tackle who converted to Islam in the eighth grade. "Now it's getting to a point where we have to remind and reassure people who don't know Muslims that ISIS is not supported by anyone I know that is Muslim or the majority of Muslims. It's good to remind people to keep a cool head and ask questions. Spend time with Muslims if you have questions about it, and really learn that Muslims don't support heinous acts that terrorists commit. And the majority of Americans don't support the bigoted comments that politicians are making."

Harris, an eighth year NFL veteran from Notre Dame, said his beliefs never have been an issue at any stop in his football career.

"Every single one of my teammates my entire life has been supportive, inquisitive. There are a couple guys on the team now that ask me questions," he said. "We talk all the time about it."

Here again, one could at least muster polls to question the Harris view. The Pew Research Center asked about ISIS in 2015, and found a few countries where ISIS was viewed favorably by some. In Nigeria, 20 percent of Muslims said they had a favorable impression of ISIS and another 19 percent picked “Don’t know.” In Malaysia, 12 percent viewed ISIS favorably, 21 percent selected “Don’t know.”