In 2013, NPR host Rachel Martin spent eight minutes of taxpayer-subsidized air time on the last Sunday before Christmas promoting the atheist band Bad Religion wrecking Christmas songs and found no time to question if it offended: whether it was their song's assertion that “American Jesus” drives the Ku Klux Klan, or the band's leader mocking the “selfish, juvenile hope for an afterlife.” 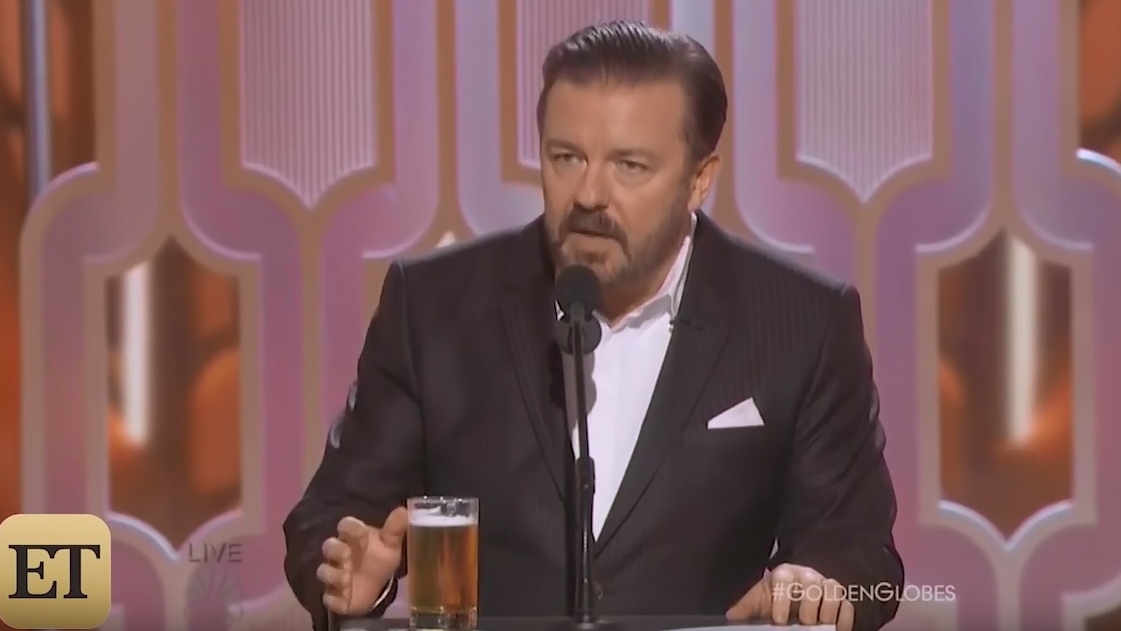 MARTIN: May I ask you about the joke that you told about Caitlyn Jenner that then got all this criticism and anger from the trans community?

GERVAIS: Yeah. But exactly, it was a buzzword. You know, that thing -- that's the thing about taboo subjects. Some people - they see the subject, and it's an emotional response to it. It's "that's my thing, he shouldn't be doing -- saying things about that." But if you analyze the joke, there's nothing transphobic about that joke. At all. I clearly get into it by -- I'm going to be nice tonight. I've changed. Not as much as Bruce Jenner, now Caitlyn Jenner, of course. Now, first of all, people didn't like me dead-naming. I'd never heard that term before, dead-naming. Now...

MARTIN: Which is when you identify the previous identity.

GERVAIS: It was Bruce Jenner that changed. Are we to assume - -we're not allowed to say Bruce Jenner ever existed? That wasn't a person? Well, it was, you know?

And I understand that some say - well, he didn't change. He was always trans and now he's come out. I accept that as well. But the important thing was that I wasn't making a joke about the transition. I was making a joke about her driving, clearly. So I say “I've changed. Not as much as Bruce Jenner, now Caitlyn Jenner, of course. What a role model, became a role model for trans people everywhere - breaking down barriers, you know, and destroying stereotypes.” And here's the joke - “didn't do a lot for women drivers.”

There's no thought about how this joke might sound to the family of Kim Howe, who was killed when Jenner rear-ended her and pushed her into the path of an oncoming Hummer. Liberals only care about Jenner's feelings, and most Jenner coverage scrubs this inconvenient accident out of the picture. This is where the NPR host suggests maybe he shouldn't have said what he said:

MARTIN: If you had known about the dead-naming phenomenon, would you have changed that joke?

GERVAIS: What, that you can't even say...

GERVAIS: Well, I do know about it.

GERVAIS: And I've just done it three times in this interview. But I hope we're all grown-ups. And I hope you're allowed to use words that may be politically charged if you're doing it in context, and we are. I have to say that name to explain this joke. So it's ridiculous that you can't - words don't have power outside the context in which they have that power. So we should be allowed, as adults, to discuss anything. That's the important thing.

So someone just tuning here suddenly hears me say Bruce Jenner. And they go - “that's terrible. He shouldn't ever say that.” Well, why shouldn't I say - we're having an intellectual discussion here. Of course, I should be allowed to say any word that is needed in this discussion. Do you see what I'm saying?

A few moments earlier, Martin suggested “everyone will remember” Gervais mocking Hollywood stars in his turns hosting the Golden Globe Awards, that he was angry and he lashed out and gave everyone “this big middle finger.” Gervais claimed no one was “targeted,” and insisted on freedom of speech:

GERVAIS: I wasn't angry. And I wasn't lashing out. People, you know - people use things like targets of your jokes. Well, I don't consider them targets. I consider them subjects. And I didn't go out there to ruin everyone's day or undermine the moral fabric of America. I was making jokes, you know. I'm the butt of my jokes as well. And it's our attitudes.

You know, I wasn't picking on anyone. And I also didn't pick on anything that people can't help. It wasn't a room full of wounded soldiers. This was a room full of the most privileged, rich people in the world with some idiot from England teasing them a bit, you know. And I really think offense is the collateral damage of freedom of speech, and freedom of speech is one of our greatest privileges.

PS: To demonstrate how trans-sensitive NPR can be, the Sunday morning show also carried a “story” that was titled “How A Weekend At Transgender Camp Changed A Mother-Son Relationship.” As part of the subsidized StoryCorps “OutLoud Initiative, recording conversations about LGBTQ lives across America,” Chris Lopez had a chat with her eight-year-old daughter, now known as “Gabe.”

CHRIS LOPEZ: Do you remember when things really changed for you?

GABE: We went to a camp, and I met three best friends - Luke, Brock, and Cooper. They were all transgender like me, so they all wanted to be boys. Brock taught me how to pee standing up.

LOPEZ: (Laughter) And that was huge for you, right?

LOPEZ: That's why I said we're bros. We know each other.

LOPEZ: Do you ever get scared about what it's going to be like to grow up transgender?

GABE: I've been wondering if when I'm older a lot of people will try to hurt me or something. Or...

LOPEZ: Like, if they find out that you were born a girl and they have a problem with it?

LOPEZ: You think that they might try to hurt you in some way?

LOPEZ: Were you ever worried about telling me that you were transgender?

LOPEZ: Did you ever try to tell me and then change your mind?

LOPEZ: How many times, do you think?

GABE: I was worried that you liked me as a girl.

LOPEZ: Because we used to have a lot of fun?

LOPEZ: Do we still have fun?

LOPEZ: So it doesn't really matter if you're a boy or a girl, right?

LOPEZ: I didn't know that you were dealing with that on your own. If I'd known, I would have tried a little bit harder to have that conversation with you and maybe start it myself.