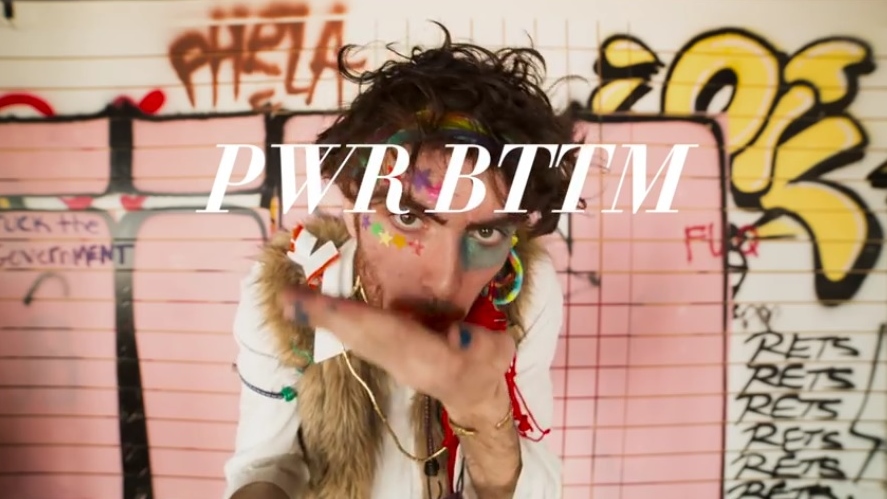 Known for performing in drag and drenched in glitter, Brooklyn-based PWR BTTM write catchy songs about queer politics, sexuality, and falling in love at Dairy Queen, injecting its music with a morbid and outrageous sense of humor. Since releasing its debut album, Ugly Cherries, last September, band members Liv Bruce and Ben Hopkins have received critical accolades across the board-most recently last week, when NPR premiered the music video for its song "West Texas."

NPR is nothing if not progressive in their tastes in punk musicians. City Paper’s Quinn Myers went to the DC “trans” musicians for affirmation:

“I feel that gender fluidity is celebrated in our music scene,” says Johnny Fantastic, a gender-neutral musician who plays frequently in the D.C. area with the electronic noise-pop band Stronger Sex, as well as various other projects. “If people knew how awkward the decision of choosing [a] bathroom is for me, they would agree to any scenario that would eradicate that awkwardness for me,” Fantastic says. “I present myself as female very often, and I dislike the choice that I have to make.”

Felix Donate-Perez, a transgender singer-songwriter from Arlington who performs under the name Foster Carrots, agrees. When playing shows at venues with only men’s and women’s bathrooms, he says he has to think about his options ahead of time. “Restrooms are supposed to be a space that people don’t put a lot of thought into, but when a venue has them set up as gendered spaces (without an additional gender-neutral option) it causes anxiety, stress, and potentially risks the safety of trans folks,” Donate-Perez says. “At almost every show I’m forced to pick between two doors, neither of which guarantee I won’t face harassment.”

....As PWR BTTM continues to tour and advocate for gender-neutral restrooms, its members hope that the model will be picked up by other bands and expected by fans. “It’s our responsibility to cater to the needs of people who come and enjoy our work who have the same values we do,” Hopkins says. “We’re not trying to change the world. We’re just sort of trying to deal with our specific lens of performance.”

Myers concluded that neutrality just wasn’t safe enough. Obliterate the gender signs! “While it may be more convenient, a laissez faire approach toward the specified gender of bathrooms—as seen across the D.C. area—falls short of acknowledging the tough situations gendered signs can cause for non-binary and transgender patrons.”

Their music is rooted in and informed by their queer life experiences, both Liv’s as a non-binary trans person (pronouns: they/them/their) and Ben’s as a self-described “broke-ass drag queen” (pronouns: he/him/his or they/them/their). So they were both taken aback by an experience they had with a certain venue’s management while on the road last summer, supporting fellow Father/Daughter act Diet Cig’s national tour.

“We had a show last summer at a venue in Philadelphia that had gendered bathroom signs that were transphobic,” Liv told me while we were holed up at Mamoun’s on St. Mark’s during Wednesday’s midday downpour. “One sign said ‘boobs’ and the other said ‘balls.’ That sucked because we’re a queer band that plays queer music, and queer people come to see us… I tried to bring it up with the owner that some of our fans have boobs and balls and some of our fans don’t have boobs or balls. I asked, ‘What can we do about this?’ And he just kind of laughed in my face,” telling Liv that there was a “gender neutral” facility all the way at the back of the space up some stairs, hardly accessible or even visible to the average attendee at their concert....

“Say we send our rider to a venue in Chattanooga, Tenn., that has never gotten that kind of rider before,” Liv said across the table, nearly drowned out by the music playing at Mamoun’s. “Maybe five people who have never shared a bathroom with someone of a different gender identity will use that gender neutral bathroom. Of those five, maybe one person will opening a business next year and ask themselves what they have to gain from upholding the gender binary with their restroom spaces. If I had a bigger ego, I’d say that’s how you change the world.”