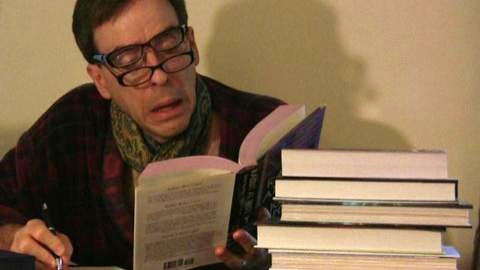 On Wednesday, Washington Post book editor Ron Charles raved over a French novel called The Age of Reinvention. The headline on the front of the Style section was “A French tale of Islamophobia and deception that feels eerily timely.”

Charles explained “it has taken more than two years for Karine Tuil’s sensational tale of Islamophobia to drift across the Atlantic. Now, though, in a horrific coincidence, her novel arrives as Paris is bleeding and the Republican presidential candidates are giddily stringing barbed wire along our borders. If I didn’t know better, I’d guess this story had been written within the past 24 hours.”

In the novel, Samir Tahar, the son of poor Tunisian Muslims in Paris, is a kind of “North African Gatsby,” pretending to be a Sephardic Jew as he rises to the top of the legal world in New York City. “He was going to cut through the bars of his social jail cell, even if he had to do it with his teeth,” Tuil writes. As Charles explained, it makes him vulnerable to a blackmail scheme:

But to attain all this splendor, Samir "had rid himself of his past like a murderer dissolving his victim's corpse in an acid bath." Early on, he stole the outline of his best friend's life and passed himself off as a Sephardic Jew. What better way to snuggle into the pantheon of New York's legal stars, philanthropists and liberal causes? All he has to do is make sure that no one ever discovers his abandoned mother, who still hopes he's living the life of "a good Muslim."

....If it’s never possible to sympathize with Samir, Tuil makes it easy to understand the logic of his deceit at a time when prejudice has so poisoned the West. “He’d had no other choice,” she writes, “but to sever himself from his origins, to bleed away his identity, to rip out his guts.”

Reinvention is the cost of success in this chaotic, racist economy. And in a cleverly interlaced side story, Tuil emphasizes that reinvention is also the essential requirement of radical Islam. To attain respect in this world and glory in the next, disaffected French Muslims must be willing to be renamed, retrained and remade. Only the supercomputers at the National Security Agency could spot the connection between New York’s flashiest lawyer and an al-Qaeda warrior trudging through the mountains of Afghanistan, but in the war on terrorism, the United States’ reach knows no limits — or restraints.

This would explain why The Washington Post hates the idea that radical Islam is causing mass shootings in California. He seems more offended by the war on terrorism than by....Islamic terrorism. Paris is about Islamophobia, not radical Islam. The tragedy is a push for the "barbed wire" of stricter immigration, not preventing a terrorist from bringing another killer into the country on a "fiancee visa."