What Had to Be Ignored For Media to Cry 'Triumph' for Hillary on Benghazi?

In case you didn't get enough of the Hillary-boosting after the "marathon" Thursday Benghazi committee hearing, other conservative media experts have rounded up their own samples of liberal-media wagon-circling.

James Taranto of The Wall Street Journal titled his daily column "Benghazi Boosterism," as in cheering for the home team, a regular theme of media bias: 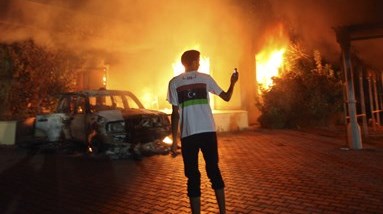 Much of the press coverage of yesterday’s hearing of the House Select Committee on Benghazi has a boosterish tone, like a local newspaper cheering on the hometown team’s championship run—the hometown in this case being Hillaryville. An example is this “analysis” by the Associated Press’s Ken Thomas and Lisa Lerer:

"Hillary Rodham Clinton turned an 11-hour congressional grilling into a campaign call to action on foreign policy, using a make-or-break appearance before the Republican-led Benghazi committee to display a commanding, presidential presence under a barrage of questions."

“Hillary Clinton Triumphed at the Benghazi Hearing by Not Losing Her Cool,” according to the headline of a piece by the Washington Post’s Chris Cillizza. A Politico story is headlined “Hillary’s Best Week Yet: The once-beleaguered candidate looks like a frontrunner again.” The “home team” analogy is especially apt here, as the author, Todd Purdum, is married to a former Bill Clinton press secretary. Vox’s Matt Yglesias crowed that Mrs. Clinton “ended up mopping the floor with her antagonists.”

Taranto made the point that even conservative journalists like Matt Lewis and Byron York credited Hillary with having a successful day, but that scoring this as if it were a sporting event is all wrong. It's about what we learned about Benghazi and the Obama administration response that matters. Some reporting after the hearing showed that Mrs. Clinton lied about providing all the "work e-mails" about Sidney Blumenthal, and the testimony underlined that she had lied directly in the face of a survivor's father that she would bring to justice the YouTube filmmaker who caused his son's death.

At Commentary, Noah Rothman surveyed "Washington's sickness" on Capitol Hill: "The gushing over the beatified Clinton’s poise under pressure has reached levels of hagiography the left once reserved exclusively for Beyoncé Knowles," he wrote. He suggested most reporters failed to distinguish themselves from "partisan Democratic communications operatives." A small sampling:

“Politically speaking, over the last week Clinton has broken the back of Sanders, Webb, Biden, and the Benghazi committee,” the New Yorker’s Ryan Lizza marveled.

“After all that buildup, was that really the best the Republicans could do? Seriously?” the incredulous Michael Tomasky affirmed in The Daily Beast.

“Hillary Clinton wraps up 11-hour marathon hearing on 2012 Benghazi attack that produced little, if any, new information,” read a blurb that graced the screens on New York’s commuter trains courtesy of MSNBC.

To make up for all this "Benghazi nothingburger" analysis, he summed up what should have been the "news" instead of the boosterism:

What we discovered is this: The White House and Clinton apparently knew that the Benghazi attack was the premeditated work of Islamic terrorists before the bodies were cold. She and the administration nevertheless proceeded to propagate a falsehood that advanced the president’s preferred political narrative just six weeks before a tightly-contested national election. That’s a scandal on par with the so-called “October Surprise,” in which Ronald Reagan was alleged to have some role in convincing Iran to surrender the American hostages in its custody in 1980 (a conspiracy theory House Democrats were still investigating 12 years later).

At 10:32 p.m. on the night of the attack, Secretary of State Hillary Clinton issued a statement in which she noted that “some have sought to justify this vicious behavior as a response to inflammatory material posted on the Internet.” The committee disclosed never-before-seen emails revealing that Hillary Clinton emailed her daughter, Chelsea Clinton, who she referred to by her pseudonym, Diane Reynolds – like anyone who was communicating through a secure and impenetrable personal email address would – at 11:12 p.m. saying “an Al Queda-like group” was responsible for the attack.

“Some have sought to justify this vicious behavior, along with the protest that took place at our Embassy in Cairo yesterday, as a response to inflammatory material posted on the Internet,” read a statement from Clinton released the following day. That same day, however, Clinton held a telephone call with Egyptian Prime Minister Hesham Kandil in which she dropped this bombshell: “We know that the attack in Libya had nothing to do with the film. It was a planned attack – not a protest.”

Despite all this media gush -- just as it was uncorked in 2013 -- the public continues to find Hillary Clinton dishonest and untrustworthy. That impression shouldn't have been shaken on Thursday. It should have been strengthened and deepened.

Rothman concluded: "While news media and Democrats are praising Clinton’s performance, Americans are waking up to the notion that they might have been deliberately misled about the deaths of their fellow citizens in a terror attack and likely for petty political gain. There is something rotten here."

PS: There's also Derek Hunter at Townhall on this topic, who closes with this political point:

Just when you’d thought they’d hit bottom, these same media press release reprinters found a new way to spin for Hillary. When both Jim Webb and Lincoln Chafee dropped out of the race, the story was framed as a victory for Hillary. Two men with a collective ZERO in the polls whom the media had all but completely ignored suddenly became worthy of attention because the story could be reflected onto her.