NPR Morning Edition anchor interviewed President Obama about just two topics: the Iran deal and race relations. On Wednesday’s morning show, Inskeep began with a question from the radical left – from black professor and MSNBC host Michael Eric Dyson – and then just prompted the president instead of really asking questions.

Dyson wrote a column for The New York Times on Obama's "racial renaissance," attacking the usual allegedly racist suspects: “The right wing had made furious efforts to demonize him as a man unworthy of assuming the mantle of national leadership. The assaults from political figures who portrayed him as a cipher, or a monkey or, later, the police officers who cracked jokes at his expense, proved the toxic atmosphere.” That’s not the section Inskeep quoted.

STEVE INSKEEP: Michael Eric Dyson wrote the other day in The New York Times about your presidency and began his article with this sentence. "We finally have the president we thought we elected, one who talks directly and forcefully about race and human rights." Now, it could be that you're talking more about these issues simply because of the news in the past year or so -- a series of shootings.

INSKEEP: But I'd like to know if you think there is something else that is prompting you to hold forth more or hold back less on that issue.

OBAMA: You know, I think I've been pretty consistent if you look at my statements throughout my presidency. Some of it, I think, is events. My first two years, people were very interested in making sure we didn't sink into a Great Depression. And so I had a lot of commentary on the economy and on the financial system and on the need for Wall Street reform, and that occupied a lot of soundbites. Yeah, we still had two wars that we were in the midst of. And so there's a lot of big business that I've had to do.

What is true is that there has been an awakening around the country to some problems in race relations and police community relations that aren't new. They date back for decades. Because of smartphones and cameras and, you know, social media, I think people have become more aware of them, both black and white. And that gives me an opportunity, I think, then to try to help to constructively shape the debate.

Then came the little prompts:

INSKEEP: Were you looking for that opportunity all along? 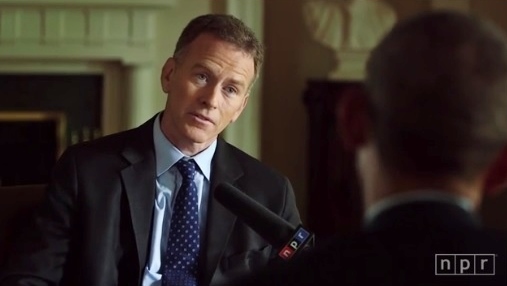 OBAMA: Yeah, I think that one of the things I've learned about being president is that, you know, we'll work on issues for a long periods of time, sometimes in obscurity. For example, on the issue of criminal justice reform, I had a conversation with Eric Holder when I came into office...

OBAMA: My former attorney general - about how could we address the issue of these ridiculous mandatory minimum sentences for nonviolent drug offenses that are filling up our jails. And we did a whole bunch of work without getting a lot of attention with U.S. attorneys around the country changing incentives so that they didn't feel as if being a good prosecutor meant always slapping the longest sentence on people.

By the way, Inskeep also skipped over the part where Dyson rejoiced that “It was almost as if Michelle Alexander, author of The New Jim Crow, and the former attorney general Eric H. Holder Jr. had hacked his computer and collaborated on his speech.” I take it he means the Eric Holder who called America a “nation of cowards” on race.

This seems to suggest that Dyson felt Obama had been a coward on race for most of his presidency. That would have been a provocative question.

NPR finds it utterly ordinary when they offer a Democratic president softball interviews from the left on race. But NPR wouldn't abide it in late 2007 when Juan Williams was offered the chance for an interview with a Republican president on race issues. That wouldn't be tough enough. It had to be refused. Williams had been too soft in an interview with Bush earlier that year.

RACHEL MARTIN: President Obama spoke with NPR's Steve Inskeep this past week, and he said this about how he's taken on race issues at this point in his presidency. Let's take a listen.

BARACK OBAMA: There's no doubt that after over six and a half years on this job, I probably have an easier time juggling a lot of different issues, and it may be that my passions show a little bit more.

RACHEL MARTIN: The president there, suggesting that it's taken several years for him to be able to fully embrace the issue of race relations in this country in the way that he has been. Are you satisfied with how the president addressed the situation in Ferguson, in particular, and race relations more broadly?

RASHEEN ALDRIDGE: At the very beginning when everything in Ferguson happened, to be honest, I wasn't quite happy with how the president was handling race. The president didn't really, in my opinion, step up to the plate. In the early days, he was, you know, very - the protesters are good, you know, peaceful. But it then went to, you know, we must keep property safe and police safe over keeping the people in the community safe. [This is a terrible sound?]

But I remember when I was invited to the White House and he sat in the room with me and other activists, I can see in the president's face, in his eyes, that he really was tired of having this conversation and that he really wanted some change to happen. He wanted to hear less stories of what was going on in Ferguson and less stories of our personal issues, but really what do we want to see change? What is it that needs to be changed in the community that will have a positive impact? And I think, after Ferguson, I mean, the president has been - he's been hitting hard on race recently, and I appreciate it. And I understand it is tough, and he's supposed to be a lame duck. But he's taken this issue seriously. And hopefully before he leaves the presidency or the White House that he would tell people that are coming into office, the fellow Democrats, that this is an issue that is - should be one of the top five things that we need to be talking about as well.