In the textbooks, journalists are supposed to be watchdogs of government – not just government of one party, but both parties. If Edward Snowden’s massive leaks on government surveillance programs (approved by presidents of both parties) win a Pulitzer Prize for  “Public Service,” why isn’t exposing President Obama’s scandals like Benghazi and IRS harassment hailed as a public service?

This isn’t just an issue for liberal judges of the Pulitzers and other journalism prizes, but for CNN Reliable Sources host Brian Stelter, who on Easter Sunday grilled Sharyl Attkisson about her alleged failures and "conservative bias," and then turned around and treated Pulitzer-winning Glenn Greenwald like he was God’s gift to journalism. David Gregory was "infamous" for challenging his propriety:

“Let me play...a now-infamous clip of David Gregory talking to you last year on Meet the Press." Gregory asked Greenwald why he shouldn’t be charged with a crime.

Stelter cut Gregory some slack because he “knew the answer to that question that he was asking you. But I wonder if you think the Pulitzer board was sending a message with this Public Service award, to people who may actually wonder why you weren't charged with a crime. Were they trying to make a statement by presenting this Public Service award?”

Greenwald said yes. “[P]eople on the committee are longtime journalists and presumably interested in basic press freedoms...a climate of fear was deliberately cultivated at the highest levels of the U.S. government and I think the Pulitzer board did answer that rather resoundingly.”

Again, if the Pulitzer judges were all about recognizing reporting that was unwanted at the "highest levels of the U.S. government," then where are the Pulitzers for reporters exposing Obama scandals? It's certainly true that the Pulitzers were handed out in the Bush years to people ripping into the Bush administration.

But Stelter and CNN left out half of Gregory's question. The clip was Gregory asking “Why shouldn't you, Mr. Greenwald, be charged with a crime?” and then Greenwald shooting back at Gregory: “I think it's pretty extraordinary that anybody who had called themselves a journalist would publicly muse about whether or not other journalists should be charged with felonies.”

Isn’t there a creepy notion therein that journalists are somehow immune to prosecution for anything? Left-leaning blogger Steven Rockford noticed this sneaky edit before, and had some arguments that would apply to CNN right now [emphasis his]:

David led into his question by saying; “To the extent that you have aided and abetted Snowden, even in his current movements, why shouldn’t you, Mr. Greenwald, be charged with a crime?”

In this case, he wasn’t necessarily directing his question to a fellow journalist.  He was directing his question to a person who some feel ventured past the role of a journalist and into the role of a person who provided support to someone who has allegedly committed a crime.  Greenwald admitted that he has had several contacts with Edward Snowden.  Many people wonder if those contacts may have gone beyond being journalistic interviews.  For Gregory to ask him about that seems to be a legitimate journalistic question.

Hence, why wouldn’t the public want to know the answer to Gregory’s question?  Moreover, why shouldn’t a journalist feel free to pose that question under these circumstances?

Glenn should have answered, “I did not in any way aid and abet Mr. Snowden.  I was acting in my capacity as a journalist conducting an interview.”  But he did not say that.  By challenging Gregory as “a fellow journalist,” he has only increased the public’s concerns as to how far he may have stepped outside the boundary of journalism in his relationship with Snowden.

Rockford also suggested in a later post "one has to wonder if Glenn in any way may have encouraged Edward to steal the NSA documents (a criminal act) to be used in his reporting.  This, along with questions about Greenwald’s potential support for Snowden's prosecution avoidance, has naturally raised public concern about his actions leading up to (and after) breaking the NSA story. wondered whether Greenwald may have encouraged Snowden to take the job with Booz Allen Hamilton so he could do the leaking." 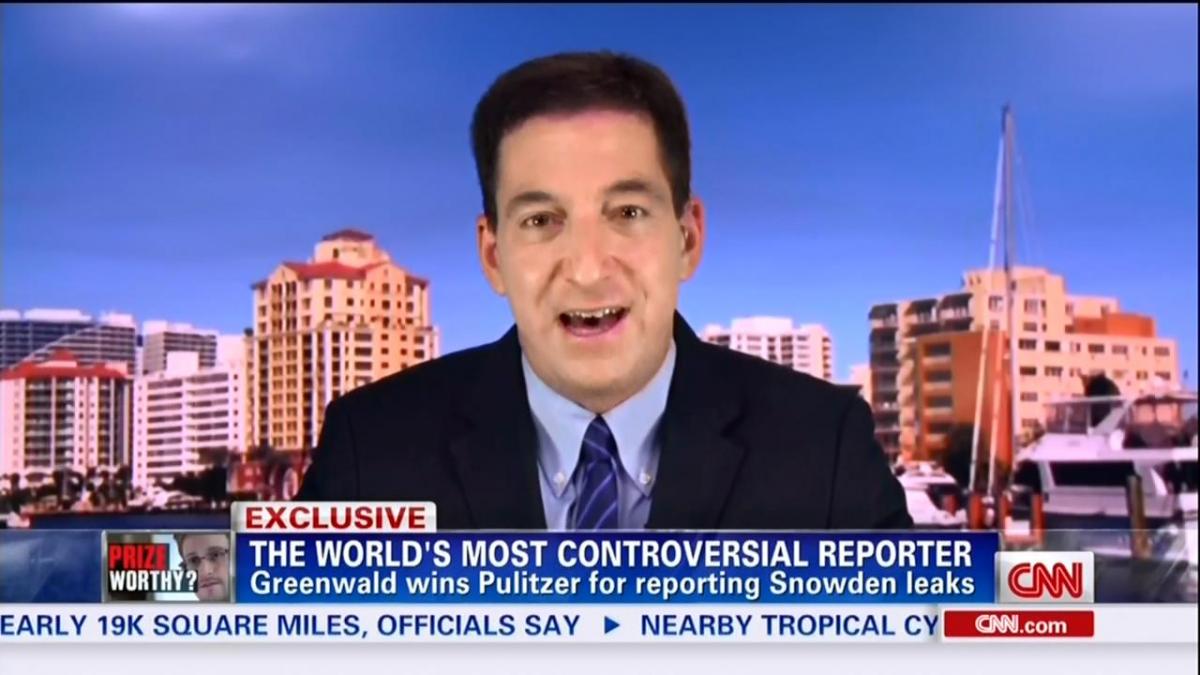 Stelter closed his softball Greenwald interview by asking if the (leftist) media awards would change minds and hearts: “Do you feel the Pulitzer, the Polk Award, and the other awards you are going to be accepting in the future for this reporting as well, legitimizes the reporting in a way that might change people's minds? Maybe take a random person who doesn't believe the documents should have ever been leaked, and maybe persuade them that they, in fact, should have been leaked?”

Naturally, Greenwald agreed: “[P]retty much every single major journalism award in the Western world has recognized the vital importance of these disclosures.”

Here are the other softballs Stelter threw Greenwald's way:

– “Where were you on at 3:00 p.m. Monday when the awards were announced? And what was your initial reaction?”

– “We saw Congressman Peter King, one of your sharpest critics right on Twitter on Monday right afterwards. He said awarding the Pulitzer to Snowden enablers is a disgrace. Anything you'd like to say back to him about that?”

– “Let me ask you about coming back to the U.S. When we spoke on this program before, you came to us from Brazil where you spent most of your time. You hadn't come to the United States since the Snowden stories began to be published. Tell me about the decision making process. It sounds like the awards were part of it. But did you also seek out assurances from the U.S. government that you would be able to enter the country freely?”

– “Your critics might say you trumped up this possible threat. Did you really feel you were concerned about coming back, that they could actually, for example, stop you at customs and interrogate you or even arrest you?” (This might sound skeptical, but it allowed Greenwald to plead that Obama aides and Republican congressmen called him a "criminal," so he could fear an arrest.)

– “And I believe you have a book coming out very soon. It's coming in May, right?”

– “I thought the book was mostly going to be about the reporting so far, but you're saying it's also going to have new information from the documents?”

Stelter could have asked about Greenwald's double standard when it comes to Valerie Plame.