It’s the bland leading the bland as Obamacare enrollment (sort of) ends. The front page of Monday’s Washington Post carries the headline “New fronts in health battle: Challenges after sign-up milestone.” (Yawn.) The pull quote inside on A-2 is “The unresolved issues mean it is far too soon to know how President Obama’s signature domestic achievement will turn out.”

In that case, why use the word “achievement”? Did they describe the Iraq War as Bush's "signature achievement"?  In doing so, the Post sounds just like Obama adviser David Plouffe, whom they quoted from ABC saying “The law’s working” and it’s a “seminal achievement.” The Post account left out Bill Kristol’s response on ABC that Democrats aren’t saying “the law’s working” on the campaign trail. 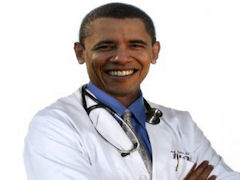 They did quote Sen. John Barrasso on Fox News Sunday saying Team Obama is “cooking the books.” But they repeatedly suggested that none of the benchmarks that journalists or voters might use are available yet.

Notice that when the "achievement" sentence appears in the article, the "polarizing" part didn't make the large bold text quote: "The unresolved issues mean it is far too soon to know how President Obama’s signature domestic achievement – and one of the most polarizing pieces of U.S. social policy – will turn out."

The story by Juliet Eilperin, Amy Goldstein, and Sandhya Somashekhar leads with weasel words, calling Obamacare’s problems “challenges” and describing a “landmark” law that may be repealed:

The first enrollment period for the Affordable Care Act ends at midnight Monday, closing one chapter on President Obama’s landmark health-care law and paving the way for a new round of confrontations that could ultimately determine the law’s long-term prospects.

Supporters face an array of political, financial and legal challenges in the coming months. Democrats and insurance industry officials are already seeking ways to blunt what may be the next big controversy: an expected increase in monthly insurance premiums next year for the health plans sold through the federal and state marketplaces.

Perhaps the Post should be congratulated for noting insurance premium increases on the front page, and the second subheadline was "Rising premiums, fines may test law's future." But there’s no mention that this represents a broken promise from the president that many people would save $2,500 a year in premiums.

The Post also downplayed the sour political outlook for Democrats. On page A-3, reporters Karen Tumulty and Paul Kane began by noting Democratic control of the Senate is "imperiled," and a Republican Senate raises the prospect of "an Obama presidency completely hobbled in its final two years."

But the headline blandly says: "Democrats toil over message: Party's strategy must appeal to base, boost turnout in midterms."