Harold Simmons, the Texas billionaire who has served as chairman of the board of the Media Research Center, died Saturday. If you've enjoyed any of MRC's work over the years, one major force keeping the televisions on was Mr. Simmons. So we were especially disgusted (if not shocked) when the New York Times obituary carried the headline "Harold Simmons Dies at 82; Backed Swift Boat Ads."

That’s not a positive for the Times: MRC’s Clay Waters documented in their news pages in 2004, they used the word “unsubstantiated” next to “Swift boat ads” on no less than 20 occasions (but never for the phony National Guard charges against President Bush.) Times obituary writer Emma Fitzsimmons used the word "discredited" after she began with the "attack ad" politics:

Harold Simmons, a billionaire who helped finance the Swift Boat Veterans for Truth attack ads against Senator John Kerry in the 2004 presidential election and donated substantially to other conservative causes, died on Saturday in Dallas. He was 82.

What about how he donated substantially to non-political charity? It came briefly in paragraph 11, after  five six paragraphs on his conservative grantmaking. Here's paragraphs four and five: 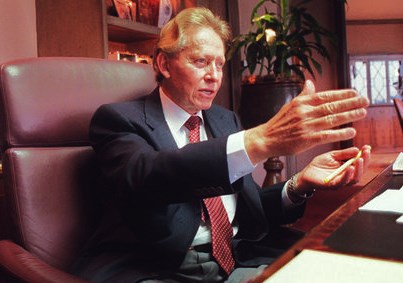 He was one of the largest donors in the 2012 presidential election, giving more than $26.9 million to “super PACs” opposing President Obama, whom he called “the most dangerous American alive” in an interview with The Wall Street Journal because, he said, the president wanted to “eliminate free enterprise in this country.”

In 2004, Mr. Simmons donated $2 million to the Swift Boat Veterans for Truth, whose advertisements against Mr. Kerry, the Democratic candidate for president, included one impugning his military service as a Swift boat captain during the Vietnam War. The allegations were later discredited. Mr. Simmons gave heavily to other groups through the Dallas-based Harold Simmons Foundation, which is run by two of his daughters, Lisa Simmons and Serena Simmons Connelly.

The Times writer has no link or specific evidence points to such a discrediting. Our complaint at the time was that the Swift Boat ads exposed Sen. Kerry's outrageously unsubstantiated smears of daily atrocities committed by American fighting men in Vietnam in his 1971 Senate testimony. That's what inflamed liberal reporters who had made no effort to substantiated Kerry's war stories -- either his accounts of personal heroism or his wild accusations of general American mayhem against Vietnamese civilians.

Then there's more politics in paragraphs eight, nine, and ten:

In 2012, he contributed millions of dollars to American Crossroads, a super PAC co-founded by Karl Rove. His company also contributed to the presidential campaign of Gov. Rick Perry of Texas.

“I’ve got the money, so I’m spending it for the good of the country,” Mr. Simmons told The Wall Street Journal.

His animosity for Mr. Obama was not new. In 2008, he gave nearly $2.9 million to a conservative group running advertisements highlighting Mr. Obama’s association with the 1960s radical William Ayers.

Then there was a brief nod to non-political donations in paragraph 11: "Mr. Simmons and his wife, Annette, have been among the largest donors to charities in Dallas, including the Children’s Medical Center of Dallas, the AT&T Performing Arts Center, the Dallas Zoo, and Southern Methodist University."

Now notice a dramatic difference: on January  21, 2013, after left-wing philanthropist George Gund III died, the Times never even mentioned his political philanthropy. Here’s a bit of the donation list from Discover the Networks:

-- In 2008 Gund donated money to the political campaigns of three Democratic congressmen, as well as to ActBlue, the Fund for the Majority, and the Obama Victory Fund. Other political figures whom Gund has supported include Hillary Clinton, Dianne Feinstein, Nancy Pelosi, Barbara Boxer, and John Kerry.

-- In 2007, 2008, and 2009, this [Iara Lee and George Gund] foundation bankrolled such high-profile organizations as the A.J. Muste Memorial Institute, the American Friends Service Committee, the Center for Constitutional Rights, the Greenpeace Fund, Human Rights Watch, the Institute for Policy Studies, the Institute for Public Accuracy, the International Crisis Group, the Middle East Children’s Alliance, the Middle East Studies Association, the Ploughshares Fund, the U.S. Campaign to End the Israeli Occupation, the Tides Center, and the William J. Clinton Foundation.