NPR media reporter David Folkenflik filed a fond and light remembrance of liberal Baltimore Sun reporter Jack Germond on Wednesday night’s All Things Considered: “He lived life large and didn't suffer phonies. But here's the thing about Germond, and you don't find much among reporters today, he liked politicians.” He was "a lover of horse races, and horses." Nobody remembered Germond comparing Jerry Falwell to Nicaraguan communist dictator Daniel Ortega. (Correction: The original article cited Pat Robertson instead of Falwell.)

Folkenflik didn’t exactly offer the same treatment to Germond’s seatmate on “The McLaughlin Group,” Robert Novak. On August 18, 2009, after some fond remembrances from colleagues, Folkenflik brought in leftist David Corn to announce Novak’s reputation was damaged by the Valerie Plame leak case:

FOLKENFLIK In July 2003, Novak revealed the identity of CIA agent Valerie Plame Wilson. Her husband was a diplomat who had been critical of the Bush administration's push to invade Iraq. Wilson traveled to Niger for the CIA to investigate a possible nuclear tie with Iraq. In 2007, Novak told NPR of his conversation with his source, then-Deputy Secretary of State Richard Armitage. 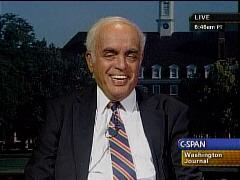 NOVAK: And he says, well, his wife works at the CIA. I said, she does? And he said, yes, in the counter-proliferation division. And then he kind of chuckled. I put it in the middle of the story, and I never thought it would cause this turbulence.

FOLKENFLIK: Federal prosecutors found a White House effort to discredit [Joe] Wilson by exposing his wife. Reporter Judith Miller went to jail for more than 80 days to protect her source, top White House aide Lewis Libby. Libby was ultimately convicted of obstructing justice. When Novak was questioned about the affair on CNN, he tore off his microphone and walked off the set. Liberal journalist David Corn, of Mother Jones magazine, says the story damaged Novak's reputation.

DAVID CORN: I think to people who've been following politics over the last 10 years, it was an event that came to define him.

Bringing in a hack from Mother Jones to spit on Novak’s reputation in an obituary is a milder version of NPR’s unforgettable move to bring in atheist Christopher Hitchens to trash Mother Teresa in their obituary. They even warmly recounted that hate in their Hitchens obit.

Folkenflik also erred in describing Novak as storming off a CNN set over Plame questions. He stormed off because he’d suddenly had enough of James Carville’s partisan taunts.  Then-CNN correspondent Ed Henry said, “I had told him in advance that we would ask him about the CIA leak investigation…Hopefully we’ll be able to ask him about that in the future.” But Henry had previously grilled Novak on Plame without a walk-off.

NPR’s Linda Wertheimer also brought a little acid to the Novak-dies coverage on that day’s Talk of the Nation show: “Robert Novak became famous for a kind of rough-and-ready right-wing ideology that opposed the liberal side of the Democratic Party, but also the gentlemanly version of the GOP, which in part, thanks to Novak, is no longer in charge.”

After these obits, it would seem NPR is the last network that ought to be upset about being “gentlemanly.”

PS: One of my first Washington journalism experiences was a ten-week National Journalism Center internship in 1987 with Novak and Rowland Evans.