You can always make fun of white people. New York Times media writer David Carr bowed deeply to the satirical skills of MSNBC host Chris Hayes and his satire accomplice Cord Jefferson of Gawker.com for making fun of the dreadful moral state of white youth, and a "white criminal culture" which white elders and the "mainstream media" fail to condemn.

Carr said Hayes put on “a satire meant to show how lame the hoary race tropes of cable news have become. As a comedy bit, it was very well done.” He even brought in an academic to label it “brilliant.” Hayes was tapping his “inner Bill O’Reilly” -- better known as the man who crushes Chris nightly in the Nielsens: 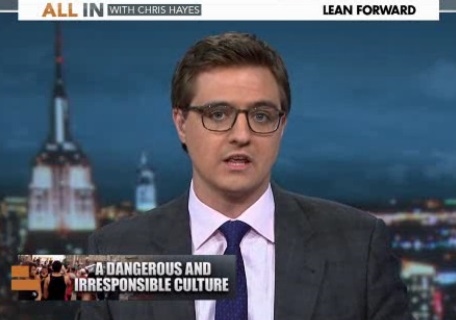 Both men were straight-faced and earnest. Mr. Hayes, tapping his inner Bill O’Reilly, did a fine job of bloviating his way through an introduction heavy with outrage: “The story of the white criminal culture is not a story the mainstream media will tell you. But once you scratch the surface, these stories are everywhere you look.”

The “news event” here was a riot after the U.S. Open of Surfing in Huntington Beach, California. Here’s one reason it can be funny: “No injuries were reported.” Property damage, yes, lots of tipped porta-potties, but no violence.  When cable-news personalities complain about black leaders failing to condemn black-on-black violence, they're talking about murder, not toilet-tipping.

Carr interviewed Hayes, who insisted "the risks of inserting satire into a format built on sobriety were worth it." MSNBC, based on "sobriety"? In the old haunted hour of Olbermann? Think again. But Hayes lectured: 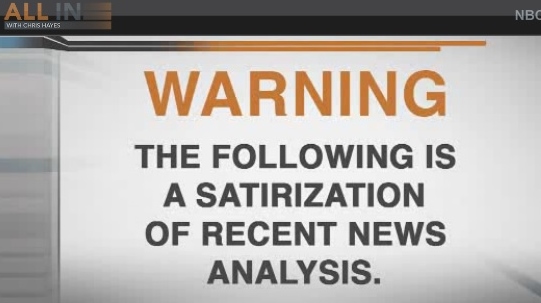 “It’s definitely entering dangerous territory because the social contract assumes that when I express opinions, those are genuinely my opinions,” he said. “You don’t mess with that lightly, but we thought it would be illuminating to play with those conventions.”

The segment on “All In” began with a written warning — “the following is a satirization of recent news analysis” — and ended with a return to preachiness, with Mr. Hayes wagging a finger, this time he meant it, and suggesting that viewers needed to see that coverage of black America was just as silly.

Hayes ended with his inner Mister Rogers, not his inner O'Reilly:

HAYES: If you watched that segment and thought that’s an absolutely ridiculous premise and an absolutely terrible way to talk about millions of people who share nothing, nothing in common except general broad pigmentation, you are correct! And remember that the next time you hear those same arguments, but with a different word in place of the word “white.”

Carr is one of those "mainstream media" liberals who hates "cable news" when he mostly loathes Fox. Somehow, Stewart and Colbert are the scourges of cable vapidity, not the exemplars of cable vapidity. Hayes was a "self-cleaning oven" of the national conversation:

Instead of waiting for Jon Stewart or Stephen Colbert to clip and annotate cable vapidity, MSNBC was temporarily acting as a kind of self-cleaning oven, parodying the excesses of cable from a very near distance.

“I think it was sort of brilliant,” said Jeffrey P. Jones, the director of the Peabody Awards at the University of Georgia, and the author of “Entertaining Politics.” “What they did has been done before in all kinds of ways, but the context, of putting the satire right into a cable news show, makes it very powerful.”