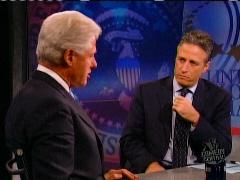 The Washington Post promoted the dueling Jon Stewart/Stephen Colbert liberal satirist rally on Saturday's front page with the blurb: "Comedy Central sets up opposing stunts in October. Your dilemma: Join Stewart's 'Million Moderates,' or Colbert 'Keep Fear Alive'?" What Post TV critic Lisa deMoraes discovered is that there are no moderates organizing this event on the last weekend before the midterm elections. Comedy Central is relying on two liberal Clintonistas:

We've discovered that a permit application was submitted for the Oct. 30 rally rivalry, on Sept. 8 to the National Park Service by Minassian Media, Comedy Central and Chris Wayne and Associates.

The permit application modestly estimates a crowd of just 25,000 people, which suggests that Comedy Central does not think there are very many people with a sense of humor living within a reasonable commute of the Mall.

Since liberals are quite active in dismissive large conservative rallies as pitifully attended, will a turnout of 10,000 or 20,000 people be interpreted as a failure? If turnout is low, expect the media to proclaim it was merely comedy, after all.

Craig Minassian turns out to be quite funny. In a speech at the Clinton School of Public Service, he claimed "contrary to popular opinion, fake news shows simply want to be funny and are not looking to send a deeper message to viewers." Yeah, that's why they hold rallies to mock conservative events.

The Post should have noted Chris Wayne is still active with Bill Clinton. His firm's website boasts "CWA has been actively involved with the Clinton Global Initiative, its growth, and its various iterations since its inception in 2005.

"Serving as an Executive Producer, Chris Wayne has been responsible for all aspects of event production, logistics and conference support. While we are proud of the accolades that the conference has received over the past few years, we are most proud of the impact that the meeting has had on bettering the lives of millions of people around the world - a direct result of the basic underlying idea of the event: commitment to action."

Earlier: Clinton lauded Stewart during a 2006 interview on his show:  "My daughter says [The Daily Show] is the new source of choice now for all discerning young people."