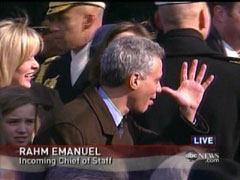 The Post website went even further, with the snotty headline "An unlikely hero for the right." (Update: they may have borrowed from Politico, which also ran a headline "Eric Massa as a conservative media hero.")

If the parties were reversed, and a resigning member lit into the Republican majority leader and the Republicans’ top White House aide, the headline wouldn’t be "Liberals point to claim by Republican." Because the Washington Post are those liberals.

Reporter Paul Kane overdeveloped the "unlikely hero" line as well. He began: "Conservative activists rallied Monday to the side of a liberal New York Democrat who had resigned from the House, after he charged that his party's leaders had conspired to oust him over his opposition to President Obama's health-care legislation."

Kane did not report that conservatives on Monday said Massa shouldn’t have resigned, or defended him on emerging claims that he sexually harassed a male staffer. (Mark Levin, for one, explicitly said Massa is no hero before running his radio-show excerpts Monday night.) On a positive note, Kane’s report did detail the conservative critique of the liberal finagling to pass a health "reform" bill:

Conservatives have complained about other examples of what they see as illegitimate deal-making to secure votes: what they call the "Cornhusker Kickback" and the "Louisiana Purchase" in the Senate to line up Sens. Ben Nelson (D-Neb.) and Mary Landrieu (D-La.), respectively, and Obama's appointment last week of a Utah professor -- the brother of Rep. Jim Matheson (D-Utah), an opponent of the health bill -- to the federal appeals bench.

Massa's allegation that he was the victim of a setup, in order to lower the number of "yes" votes needed to pass a bill, fed into that growing anxiety about Democratic tactics.

Memo to Kane and his copy editors: NRO is not a "blog." It is a magazine website, with many blogs on it. That’s like calling the New Republic website a "blog." It clearly suggests that Kane’s never visited NRO, even in the midst of his research for this story.

Kane also reported that Rush Limbaugh devoted a chunk of his radio show Monday to Massa, and that Glenn Beck announced he will interview Massa for the whole hour on Fox News Channel on Tuesday.

But Kane noticeably downplayed the vivid claim that a naked Emanuel approached a naked Massa in the showers of the congressional gym and screamed at him for disloyalty.

In paragraph 13 of 15, Kane briefly relayed: "Massa also accused Hoyer of lying about his knowledge of the ethics investigation and said Emanuel was the ‘devil’s spawn’ who once confronted him naked in the shower of the House gym." Kane reported denials from Hoyer, but showed no sign he made a call to Emanuel.

Online the Post offered an audio clip of Massa’s radio show appearance, but avoided the shower-confrontation story. Instead, they chose a snippet where Massa described he and Emanuel screaming profanities at each other, but then Massa declared a pox on both parties and criticized the tea-party movement.